HEROINE’S QUEST – The Herald Of Ragnarok 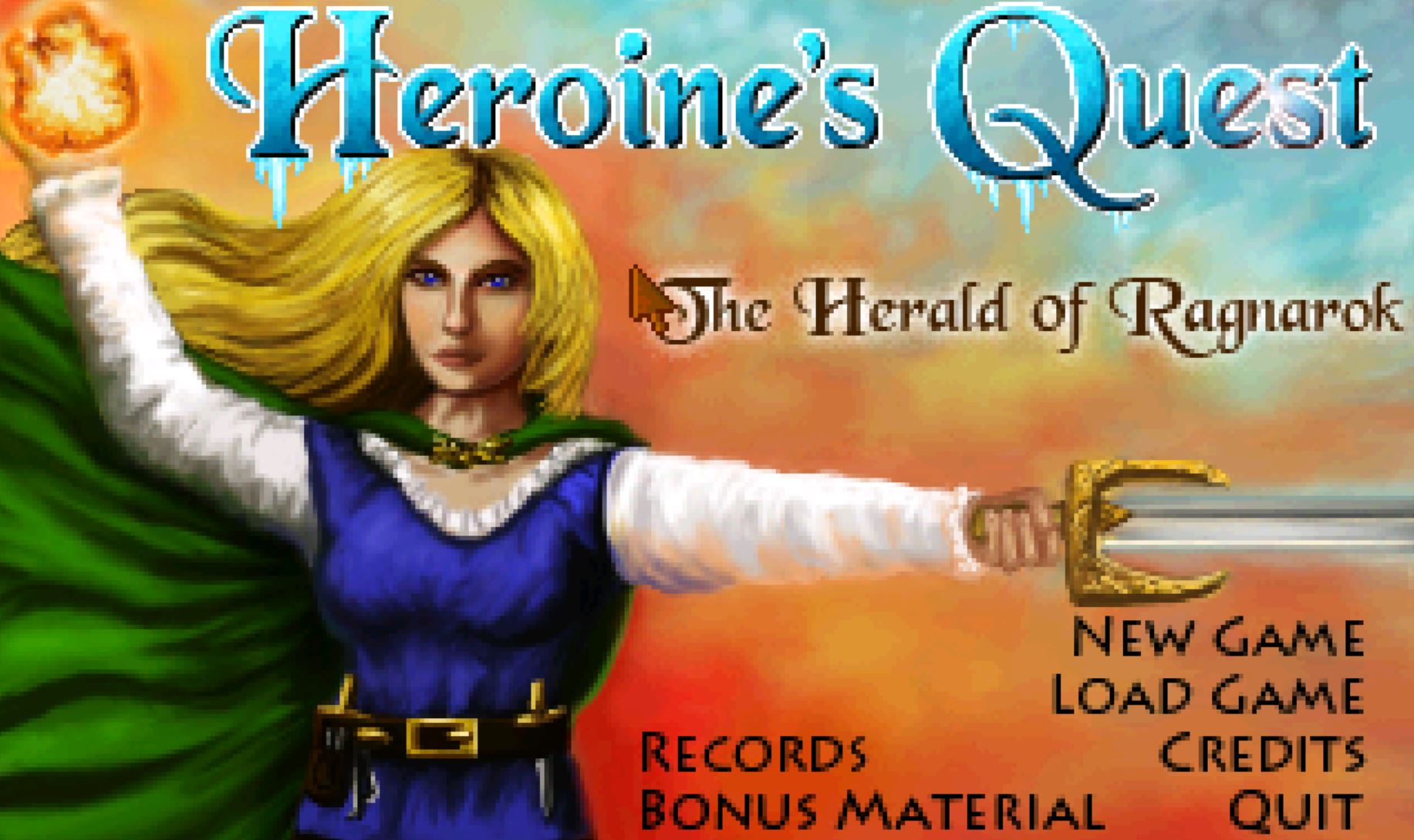 If you’re reading this hoping it’s something like King’s Quest, I know you’ve only got one question. The answer is yes, you can lose the game by getting stuck in a dungeon for all eternity. Though here it’s easier to avoid than that split-second bullshit with the mouse, so take that as high praise.

Heroine’s Quest looks, at first glance, to be a lesser heard iteration of those old “Something’s Quest” games, or perhaps the Quest for Glory series. You’ll be forgiven for making that assumption because pretty much every subsequent glance tells the same story. It’s a classically pixelated rpg with 320×200 resolution, clunky graphics, left-click-to-walk navigation and a fucking look cursor, meaning your character won’t even gaze in the vague direction of the rampaging wisecracking two headed frost giant until you tell her to. (Which sounds a bit sexist but totally isn’t. Back in my day all video-game characters had that kind of subservient discipline. Of course it meant that a lot of them got grotesquely disembowelled while rapidly spinning through their inventory, looking for something heavier than a gilded towel, but that was a price we were proud to pay.)

I’m pleased to say though, that while heroine’s quest follows that formula, it never feels constrained by it. The combat (and I was slightly surprised to learn there was old fashioned, stat-grindy combat) isn’t turn based but rather based on dodging, blocking and three different mêlée attacks, all of which do different kinds of damage. (and this is just with the warrior. I didn’t have time to check out the other character classes but I’d assume it to be similar). It’s real time skill based and, despite the ferocious clunkiness of it all, still manages to feel like a step forward from the original, not a step back from the modern. It also gives the impression that, while levelling is important, that it’s still second to having good judgment and quick fingers. Which is exactly the kind of lesson modern RPG’s could do with learning. Every time a game begins without a blue guy on a throne talking about the apocalypse, my expectations turn to shit in my mouth.

Ragnarok isn’t the kind of term you can employ lightly, it being the goddamn Norse end of the world. And as I’ve mentioned before, any Norse apocalypse is basically the end of the world on “hardcore” setting, with wolves eating gods and all of creation going down in an orgy of death that not only involves but is fucking lead by the gods. Any culture whose eternal reward is basically a training camp for kicking the shit out of all evil is the fucking definition of the term hardcore.
Now, you might think of “hardcore” as primarily an optional game mode that some games see fit to give us, where extra threats, such as starvation and de-hydration are introduced, and so it’s no exaggeration to call Heroine’s Quest hardcore. I froze to death and died of exertion more times than I died of being smashed into mulch by a wandering giant. (Though I was certainly killed by a lot of giants. They wander the wilderness exactly as randomly as I did, but with considerably better resistances to the cold.) I chose the warrior because the game promised they’d be the most straightforward, but the very first mission is “hunt a boar” and between the frostbite-o-meter tm and the exhaustion, even this took a damn long time. I sound annoyed, but probably shouldn’t.

Winning through felt as rewarding as pulling sustenance from the mouth of winter, because that’s exactly what I did. Somehow, looking at this screen makes me nostalgic for a time I was barely even alive.

And according to this website Ragnarok’s already happened, which in my mind justifies the fact that I wear a broadsword every-time I go shopping. Some of my friends have tried to point out that that’s just because I live in England, and thus it only seems like a cold and violent apocalyptic society, but I don’t trust them. Ice giants can be tricky bastards.

All this, however, is ignoring a simple truth. This game isn’t about combat. It’s in there, and it’s fun once you get the hang of it, but the real star of the show is the adventure. It’s a game that’s as much as experiencing a world as it is murdering things in it, and despite the 2d nature of it all, there’s a surprising amount of depth here, both to the story and the lore. Now, admittedly they didn’t write the lore themselves, it being (aside from the occasional doom squirrel) a pretty much accurate representation of Norse mythology. Norse is a mystical, life giving well that games could do to visit more often.

I believe I said once that there should be more vikings in gaming. Now what kind of a dick would I be if I told you to go and not buy this game?

Exactly the kind I am, apparently. Because I can’t tell you to do that. It’s free. (I will tell you to go donate though. These guys deserve it)