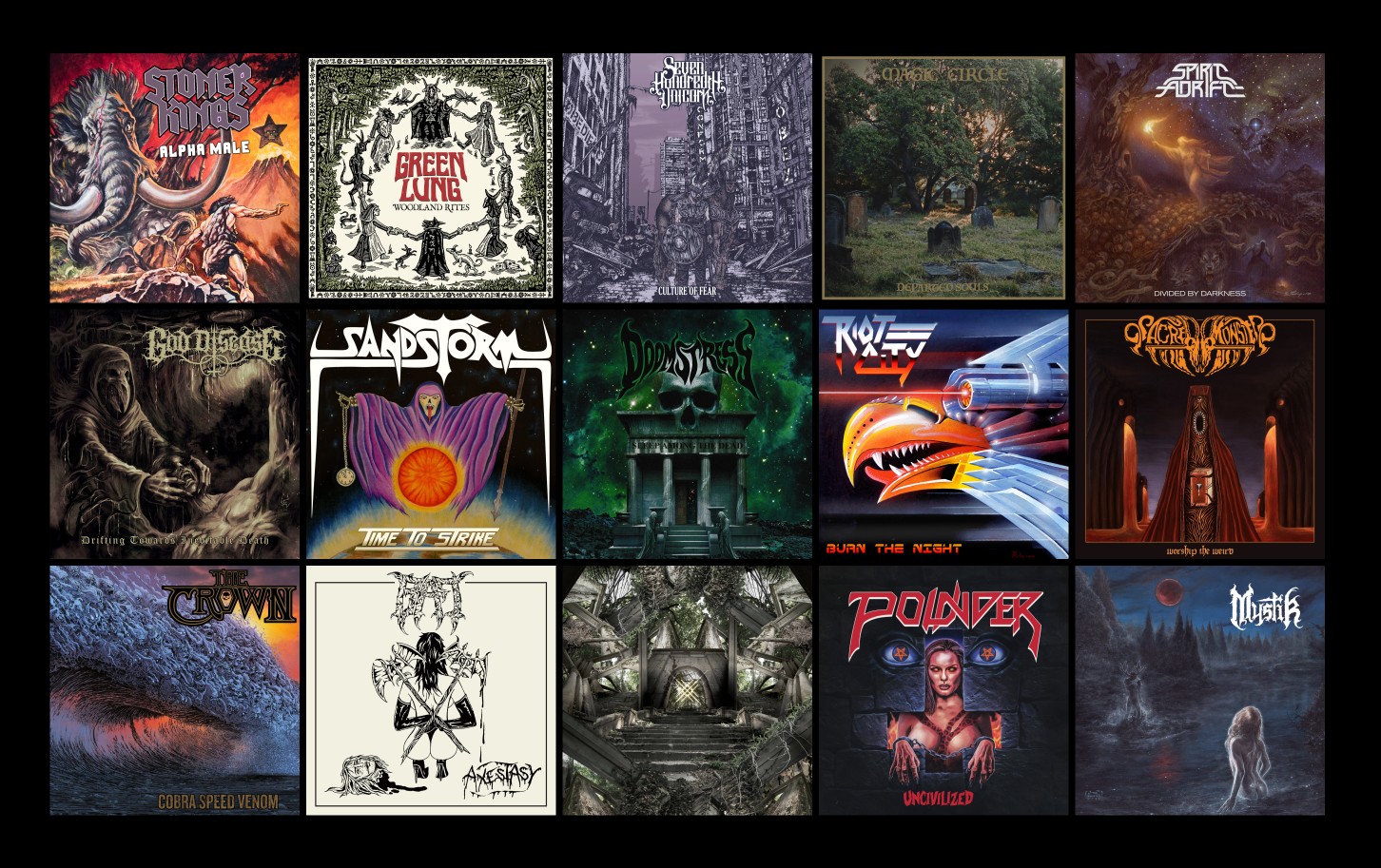 Six months gone and 2019 is already chock-full of quality metal and hard rock releases, many of which are destined to appear on end of year lists all over the Internet. My personal contender for album of the year came out very early in the year, but with six months yet to go I’d love for something awesome to come along and knock the crown off that head. After all, few experiences in life are greater than being lifted up and blown away by new music. Without further ado, here’s a look at some of the stuff that’s been putting a strain my neck for the first half of 2019:

2019 has been a fantastic year for old school metal. Pounder whetted traditionalists’ appetite in January with the release of their Heavy Metal Disaster EP, which they followed up a month later with Uncivilized, a full album that will satiate all fans of speed-infused heavy metal with songs about wearing leather and living for the night. It even has a power ballad on it! Great stuff.

For doom lovers curious about death metal, here is your gateway drug. The album title sums it up, really.

For heavy bands, one of the go-to authors of fantastical fiction is Michael Moorcock whose Elric Saga these Texans tap for inspiration. Instrumental stoner metal in the vein of early The Sword with killer guitar tone, awesome drive, and great textures.

For progressive psych rock, anyone will be hard pressed to match this exquisite beauty. Australian prog outfit Numidia play a heavy blues hinting at Pink Floyd and The Doors with Middle Eastern flourishes. Something pretty special.

With gargantuan riffs and thundering drums, these Estonians conjure up images of giant mammoths trudging through majestic Stone Age vistas towards their inevitable doom. That opening song alone is an epic trip.

Following up one of the best stoner slash hard rock albums in years is no mean feat, but Warlung make it look easy. While not quite as mind-blowing as their 2017 debut, Immortal Portal still impresses with memorable scorchers like Heart of a Sinner and No Son of Mine.

Right from the opener, Sacred Monster demands your attention, in no small part thanks to amazing vocalist Adam Szczygieł whose savage screams and snarls mesmerizes and mauls eardrums on a potent backdrop of doom-laden heavy metal. On the Stephen King-inspired Face of My Father he gives one of most emotionally powerful and goose bumps-inducing vocal performances of the year.

Brazilian doomsters Pesta follow up their excellent debut from 2016 with a new and equally excellent serving of traditional doom metal cuts. Heavy on the riffs, clean vocals, and great production value.

Look at that cover art. Yes, this is early 80s metal homage, but holy hell if these guys don’t take it to another level! Strong catchy melodies are borne aloft by soaring clean vocals, original killer riffs, and rock solid grooves. And with lyrics about death, Satan, and sorcery I can ask for nothing more. Don’t pass this by as some novelty act – Sandstorm rule!

Following up their 2016 EP, this self-titled album shows a tighter, more mature and ambitious version of Wizzerd taking their smokey craft to another level and giving their trippy stoner excursions a brutal and sinister edge. I totally approve!

Green Lung have been making waves in the hard rock community with this one, and deservedly so. The promises made by previous outings are fulfilled tenfold with the arrival of Woodland Rites, an album that is as fresh, electrifying, and inspired a take on occult stoner rock as one could ever hope for. If you have a hankering for Sabbathian riffs and ensnaring tunes that invoke the Horned One, this is for you.

Magic Circle are indeed magic to me, their rhythm section combining primal metal grooves with Brendan Radigan’s unearthly visceral vocals to pluck at the heartstrings. More than just a rocking good time, their music possesses a pure intensity that touches the spirit and sets off avalanches of emotion. Just like their previous album, this stands as a testament to the awesomely intoxicating power of music.

Witchlords: Demons in the Dark

This album makes the hairs on my arms stand up and grow beards and plunge into the mosh pit. I have yet to hear melodic death metal done more exhilarating or riveting. If songs like Iron Crown fail to get your blood pumping, I highly doubt your metalness.

Straight out the gate, Seven Hundredth Unicorn pummel you into submission with a sonic sledgehammer of brutal death sludge cast in their unique two-piece furnace of metal. If you survive, it’s all bliss from there on in.

Although a bit more melodic than their debut, this is raw speed punk metal that’ll make you wanna pick a fight and break stuff. Buy it now and pick your teeth up off the floor later.

Like an avalanche rolling down from the Great North, Riot City crush everything in their path with the power and love of true metal, playing with force and fury to rival the gods of old. This is pure heavy metal fire!

Doomstress: Sleep Among the Dead

Equally eerie and epic, Doomstress have composed a fitting soundtrack to the world’s ending. Singer Alexis Hollada gives a standout vocal performance ranging from sultry seductress to wicked witch to pompous priestess and imbues all seven excellent tracks of dread and doom with an unearthly presence. Unmissable.

Not to be pigeonholed, Spirit Adrift play an amazing amalgam of classic metal genres and produce something entirely new and fresh in the process. Greater than the sum of its parts, Divided by Darkness surpasses their previous outing Curse of Conception in all areas and underscores the band’s lofty musical ambitions.

For an electrifying dose of occult speed metal delivered with sinister urgency, look no further. Mystik nails it – and throws some superb vocals in the mix for good measure.

Testosterone level low? Have a shot of Stoner Kings! The gargantuan grooves, rumbling riffs, memorable melodies, and catchy choruses of Alpha Male will soon have you beating your hairy chest to the rhythm again.

Rocking on for years with next to no fanfare, this band may be hard rock’s greatest secret. And they’re from Canada. But of course. Look into their whole disco – it’s littered with bangers!

That feeling when you follow a random SoMe link and fall in love hard. This music is sincere and beautiful and fantastic and mows a path right into my heart. Prog, hard rock, thrash, stoner… this album is all that and then some. Absolutely stunning.

Man, where do I start? This album gets me right in the endorphin center every time with hard-hitting urgency, anthemic riffs, memorable hooks, and that wonderful baritone saxophone. I was fortunate to see the band play live shortly after V was released and it was pure frenzied bliss.