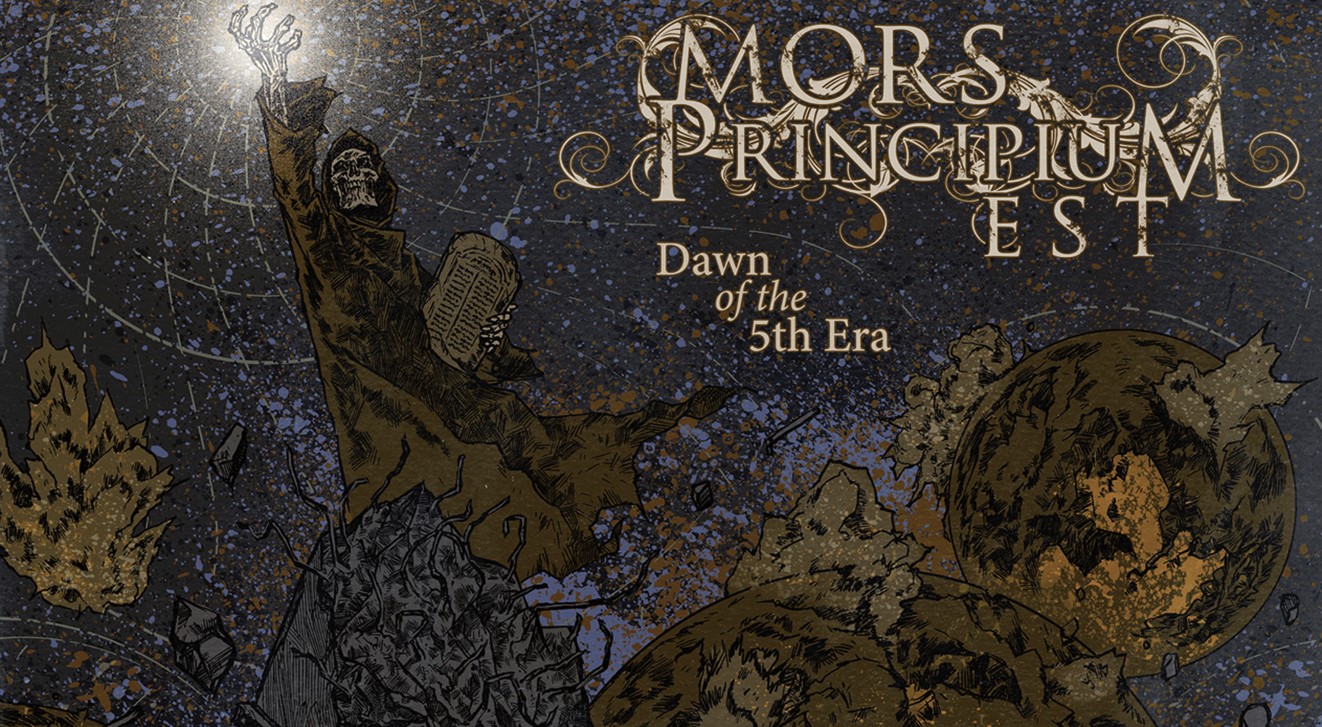 Melodic death might well be one of my favourite genres, at least when it’s done right. For some bands that can be pretty difficult to do, apparently. Either there’s too much focus onto the grinding, grunting fierceness of death or the lofty complexity of melodic metal. It’s a damn shame considering that when the stars align and everything works out it’s hard to imagine a better combination of influences.

Thankfully, Mors Principium Est seem to exist solely in that sweet-spot. This, their confidently titled fifth album “Dawn of the Fifth Age”, is the latest in a heavenly barrage of supremely good melodic death metal from the Finnish band that serves both as a reminder of how important these guys are to the scene at large and to restate what the equally appropriately titled “… And Death Said Live” already told us: line-up strife can fuck itself, we won’t stop kicking ass.

It opens with an instrumental, as so many of these albums do. A quiet clockwork tick that builds into an odd little song of its own before being backed and eventually consumed by darker, more traditional metal. The guitar work is fierce but graceful, like a panther in ballet shoes, purposefully calling to mind immense scale at the same moment in which its vocalist invokes images of tragedy and death. It’s a powerful combination, perfectly suited for a track titled “God has Fallen” which reaches its climax with a powerfully evocative instrumental section that calls to mind, if not the death of hope, then at least a mortal wound.

(The fact that the instrumental is ushered in with the words “There’s no God to save us now, this is the end” is just icing on the apocalyptic cake.)

Another standout is “I am War”, primarily for it’s tremendously throaty vocals that never quite cross the line into incomprehensibility and the lightning on a fret board solo that follows the grim proclamation “You know my name, my name is War”.

Suitably for an album so concerned with endings, the finale is probably the best song on there. The six minute “The Forsaken” is somehow both a combination of all the best moments from each song before it and a totally unique piece, starting with a serene piano melody before mutating and being devoured by some fantastically fast guitar work and the consistently standout drumming, lending the piece much of its pace and ferocity. It’s undoubtedly one of the best on the album, its peaks and troughs flowing and ebbing with unquestionably perfect judgment.

Even the cover deserves a special mention.

It’s perfect; the reaper himself surfing an asteroid like a celestial Major Kong through the ruin of a city block. In one hand he grasps a stone tablet but the other is outreaching, straining, as though he seeks to claim the sun itself.

That or he’s throwing the horns, and my eyes are shutting down to protect me from ocular lead poisoning.

Either way, this is some eye-rending heavy metal, and I’ll be damned if it’s not the cover these guys deserve. A single image of the annihilation of worlds under the black eye of some titanic scattergun, rending mountains to rubble and tearing deities asunder. And, of course, Death himself rides one of the pellets down (I assume War pulls the trigger. Pestilence could have rubbed his snot onto the cartridge? Fuck knows what Famine’s up to)

Either way, this is pretty obviously the kind of music that’d be running though his ancient skull as he surfed that fucker down. Rough and uncompromisingly graceful, with more than a touch of grief.

Or perhaps it’s just there to remind you when you pick out the album in the store, it starts with Death.