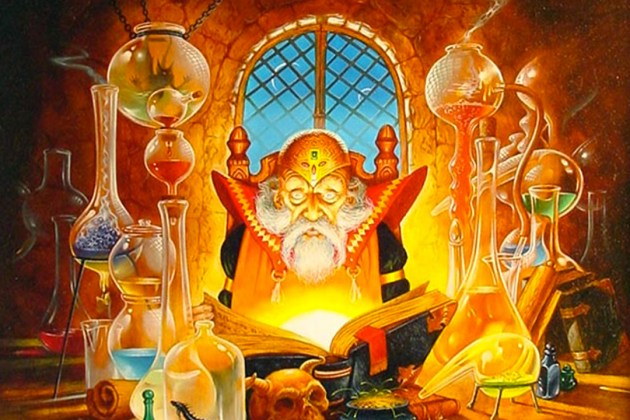 I have been changing the structure of this digest through its 22 iterations. At first I wouldn’t review any artist I already discussed and then I tried my Castle / Cottage / Crypt divisions. Now it is more of a spectrum from the very well known to the most experimental. I find this structure the most sensible as it allows me to highlight the releases people are discussing as well as showcasing the weird outcroppings of the genre. I would like to thank my editor and owner of Hollywood Metal for taking the time and finding all of these artists and pinging them on Facebook. This digest has grown from a 5 section review to a 15 section review and my editor works tirelessly finding all of you weirdos.

This month’s picture comes from the 1985 cover for Unearthed Arcana which gave the first edition of Dungeon and Dragons its debut rules additions as well as the impetus for 2nd edition. Illustrated by the very talented Jeff Easley, the full picture has some miraculous glasswork on the desk. The glorious illustration contrasts the books uneven and criticized reception. Perhaps I enjoy D&D so much since the games history is riddled with typographical and grammatical errors which adorned this release. Perhaps I cling to this since most of my work is riddled with the same type errors but still with a sense of enthusiasm. For now the image of the wizard sitting at his work desk reading forgotten lore is enough to guide this edition of the Dungeon Synth Digest to the rest of the world.

Despite Sequestered Keep releasing 7 records in 2016, the excitement for this artist never seems to dissipate. It is not hard to see why as Wandering Far not only continues the dreamy landscapes created by this artist but also introduces a new visual element of colors in the album cover. If 2017 is the year for pastoral greens, I could not see it getting any better than this moment. There have been many good releases this year and a new Sequestered Keep is a perfect choice for the start of Spring.

I believe I pledged, when reviewing the Three Golden Dreams and Silver Key single, to keep aware of this artist and future works. Well, here we are with a fantastic record that starts in the dungeon and triumphantly marches out into the kingdom with such regal splendor that eagles are at its beck and call. The scope for this record is magnanimous that even when it travels into the gloom of darkness, the dynamic nature of the music shines like everglowing lanterns.

If my interview with synth Bard has taught me anything it is the artist is fully appreciative of his work being included in the whole dungeon synth scene. This is funny as he was unaware of this whole scene and style when releasing The Gold Box Renditions. Ravenloft follows in the footsteps of The Gold Box Renditions with a full musical interpretation of the AD&D module Ravenloft with every song able to play in each of the castle’s sections. One of the physical packages includes a full glossy digest sized flavor book complete with thematic introductions for each of the sections. If this doesn’t cause fits of geeky excitement, you need to reinvest your priorities.

I enjoy the idea of demos especially in a style like dungeon synth. The anticipation for a longer release is driven by the demonstration of talent and potential. Aside from having one of the cooler names in the scene, Conjurer’s Coffer demonstrates remarkable prowess in crafting a mystic world where courtly figures dance and vie for control. It is my only hope that the Loremaster’s Riddle is followed swiftly by a longer release as Conjurer’s Coffer has done enough to get my attention.

Argonath’s late 2016 release was interesting since it concerned itself with the not too distant lore of celtic history and mythology. Journey to the Otherworld is similar not just in theme but also in presentation. Instead of opting for a full blown story which has become routine for the genre, Argonath settles for a survey on a variety of topics which becomes a tableau of ancient memories and dreams.

I believe it is time to get strange. Terrenon is dark but only in the sense that all of the themes and atmosphere are near spectral in sound and sight. Classic in its sound with enough low fidelity to give the music its edge but enough production not to loose the splendor, Withcraft is a fine album that is icy in its disposition and haunted in its lore. I could see dungeon synth exploring the cemetery more as its sounds are perfect for illustrating apparitions.

Lighten Up Sounds has taken enough money from me, I am almost hesitant on writing more about them. Goblintropp’s cover, name, and just general attitude evokes a very specific image. Goblins — and maybe mushrooms. Split between two colossal tracks, Goblintropp is a journey across shadowy mountains and even darker woodland with an earthy release that evokes a strong scent. The smell of smoke and leather surrounds this release with music that is fitting for the endless marching of monsters.

Moonless Nights is far removed from the dusty dungeons of the rest of the genre. Situated in a well furnished room with a large door open to the balcony which overlooks a summer night, this artist toils away with minimal effects driven compositions which conjure images of sadness against fine linens and lush drapery. I have made jokes in the past about my conspiracies that this artist and the chip based artist Moaning Shadows being the same person. I still raise an eyebrow from across the room as I enjoy this new record.

I believe with each passing release, I am growing more attached to the work of Mausolei. Aside from the cryptic and sometimes impossible structures which adorn each record, the somber dreamscapes of what feels like forgotten cities radiates through each release. Add to this the use of foreign album titles, lo fi atmosphere, and the general obscurity of the artist and one has a release which proposes more questions than it provides answers.

Let us pretend that we are going down into a castle dungeon. World Ossuray would be near the bottom or at least in a windowless room. While not completely dark, the minimalism in Kadath in the Cold Waste is enough to separate it from the larger part of dungeon synth. Connected to Lovecraft in its theme, the cold and frigid landscapes of this single evoke something unearthly in things that hide in the shadows.

I noticed the name Lusitano from participation in the Dungeon Synth Compilation. Listening to other works is important as The Wizards Tower is very rough in atmosphere. Compared to the very clean and dynamic range of the compilation track, there was a deliberate attempt to make the Wizards Tower bath in low fidelity. This choice highlights the lonely and woe begotten nature of the music. From the brief description, Lusitano relishes in a historic sadness which reverberates against empty castle walls.

And we are back to ghosts. At this point in the Digest, the back pages are filled with all of the experimental and weirdo stuff that scattered to the corners whenever someone comes inside whatever chamber it hides in. Celebdil is a ghost and the sound of the many releases from this artist pushes the level of corporeal. With the drone of an organ as the only anchor to this world, Celebdil toils away endlessly in some forgotten grotto of some forgotten land.

Here we are. In the bottom part of the castle. Einhorn is dungeon noise and through reading various threads on the Dungeon Synth forum, the ideological reasoning behind this is evident as artists want to explore the isolation and unknown through a variety of sounds. This isn’t something that I would even recommend to new people or people who enjoy dungeon synth. What I enjoy about Einhorn and other dungeon noise artists is the willingness to explore further and potentially find something that lies on the other side of comfort.

Continuing with the idea of dungeon noise comes another Einhorn release this time with two friends that could just be patched dolls made of horrid scraps. The three way split between Eninhorn, Epiglottis and Sebastian Crugley is a carousel of dark ambient, noise, and things which push the limits of music. I feel this type of music works best in compilations as it not only gives variety with the textures but it also corrals the sinister into one area for better processing.

I am astonished how odd this is. Finishing our delve into the dungeon is an artist who is very apologetic concerning the source material for these songs. This is spiritual music run through chip processors which could halfway between overland music for videogames and if the whole of the medieval period was cast in 8 bit. Dirge is an odd duck in just about every genre of music you try assign to them and it is just that uniqueness which makes this release so wonderful.