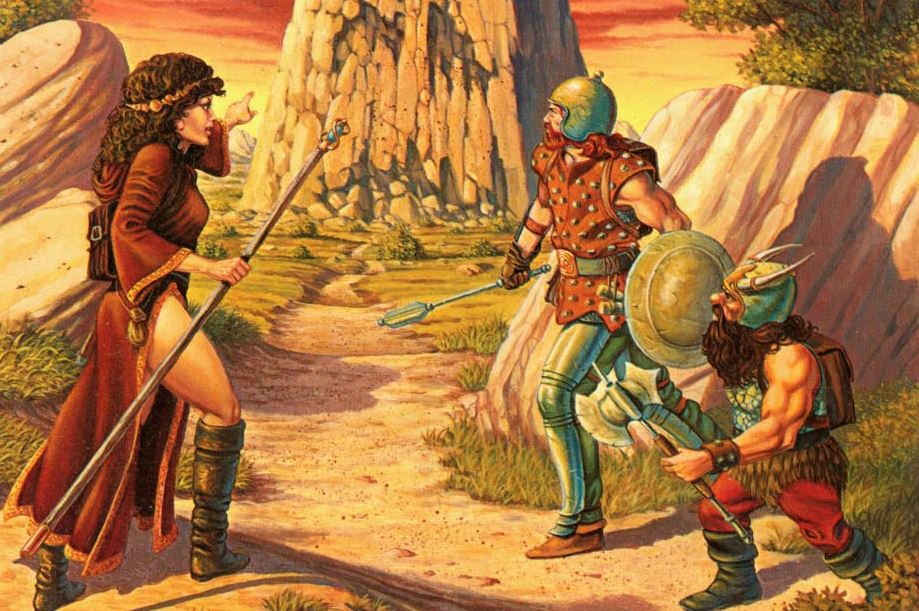 For weeks, you’ve been looking for adventure in this forsaken wilderness, with nothing much to show for it. It’s autumn now, with winter fast-approaching, and you’ll be in real trouble if you don’t earn some treasure soon. As you’re finishing breakfast at a cheap inn, a traveler walks into the common room. In a loud voice he says, “Peace be upon you all! I, Hakeem the merchant, seek Hargath Stonehand and his worthy friends! As I passed through Sylvanhome forest on the way here, I stopped at The Manor, a fine palace owned by the wizard Lirdrium Arkayz. His servant Jenlar Temlin paid to look for you and deliver his message to you. The wizard needs adventurers to undertake a quest, and he is willing to pay well anyone who answers his call. The letter of his servant explains all. Good day, my friends.

-From B8: Jouney to the Rock (1984) written by Michael Malone. Cover art by Larry Elmore

Sea Synth Ensemble made an unexpected dent in 2017 as not only a fantastic debut but also a strong case for an entire genre devoted to the wonders of water and its use in storytelling. I might be kidding about one of those but Ur Pale was a wonderful surprise for anyone following DS and Water Tombs and Crimson Horizons continues that short tradition. With imagery which is strewn across lush horizons,Ur Pales follow up may not start a new genre but boldly travels into strange waters with bright sails.

Fridfulll is not a name I recognize and some quick investigations reveal a long forgotten bandcamp page in 2013 which one song. This song. No Winds Blow Here is a rerelease of a 24 minute song by Fridfull which is less of a rerelease and more of a second chance for a sorrowful DS landscape. With an additional track added and a physical cassette wrapped up in this second chance, No Winds Blow Here rests both in 2013 and in 2018 as a masterwork of beauty and loss.

Oh my god, the outsiders have come over and co opted DS. Hey, this is actually really cool. BLVCK CEILING, flanked by the ironic/unironic use of the metal v, is an aesthetic label which is in the middle of a mire with both witchhouse, dark ambient, and Ds pouring into the same space. The result is a wondrous label which uses DIY black metal aesthetic combined with lush dark electronics. THRONE is a fantastic DS record with slips and quips of outer genres which only adds to the mystic of a record that creates a space from another place entirely.

Mist of Antiquity is a project by an artist who used to make DS under a different name. Being familiar with some of the artists has allowed me to experience the progression of their music but also their thought processes while creating. Before the Dawn of a Noble Age is not only a stunning debut but perhaps the best the artist has done in terms of creation. Regal, mournful, and with an air of stoic pride, this debut encapsulates many aspects of DS under one standard.

For the last three years, UK’s Faery Ring has released exquisite music which often times gets lost in kingdoms of sadness. The Urchin Prince is perhaps the gloomiest record for the artist and comes with, much like other records, a story which is is bound to make children cry.

Lux Viridis is the name of a project as well as a campaign setting for Dungeon and Dragons. No this was never published in any book but rather exists in the mind of its Ukrainian creator. March of Thieves is the third adventure set in this world and by the sound of it, takes place in the mysterious ports of a pirate infested town. Lux Viridis is nothing but fun and the boisterous sounds of this record are records of grand adventures in the mind of a creative individual.

“‘The Secrets of Lyre-Song’ is an audible journey through time, via the sound of the lyre and other ancient instruments.” Simple. Effective. Ancient. Old Scribe has invested not only the sound but the entire aesthetic to DS that could really be argued is something else entirely.

Oh my gosh, look at that art. Old D&D module design is so effective especially when cast in blazing red. Alex Crispin is not a name usually associated with DS if only for the reason it doesn’t sound like a pseudonym. Oh, its not. Alex Cripin is an established drone / new age sounding producer who already makes beautiful soundscapes far away from the dungeon. Escape The Dark Castle is an aesthetic project intended to call back to old dungeon crawlers. While I enjoy the sounds of his previous album Idle Worship much more, one cant argue with the cover design.

Grol the Goblin is weird and I believe that is the point. Grol the Goblin releases a lot of records in a short period of time. I believe that is also the point. While there is something certainly to be said about refining ones records, producing volumes is certainly interesting especially when it touches upon so many absurd and meta topics within the community. Dungeon noise, synthwave, winter synth, classic DS are all viewed under the lens of goblin foolishness which allows this project to dance between idiocy and genius.

Owlbear is not really weird. Not as weird as Grol the Goblin. Owlbear is raw and that is sort of the point. It is dedicated to early editions of D&D as well as the synthetic sounds of bands like Moaning Shadows and Kobold. It also sounds rough and unrefined like many bedroom demos which I habve been enjoying as of late. I was to name this style of DS Bedroom DS or 1E DS but that would probally be confusing. Until then I will listen to the no-fi sounds of owlbear.