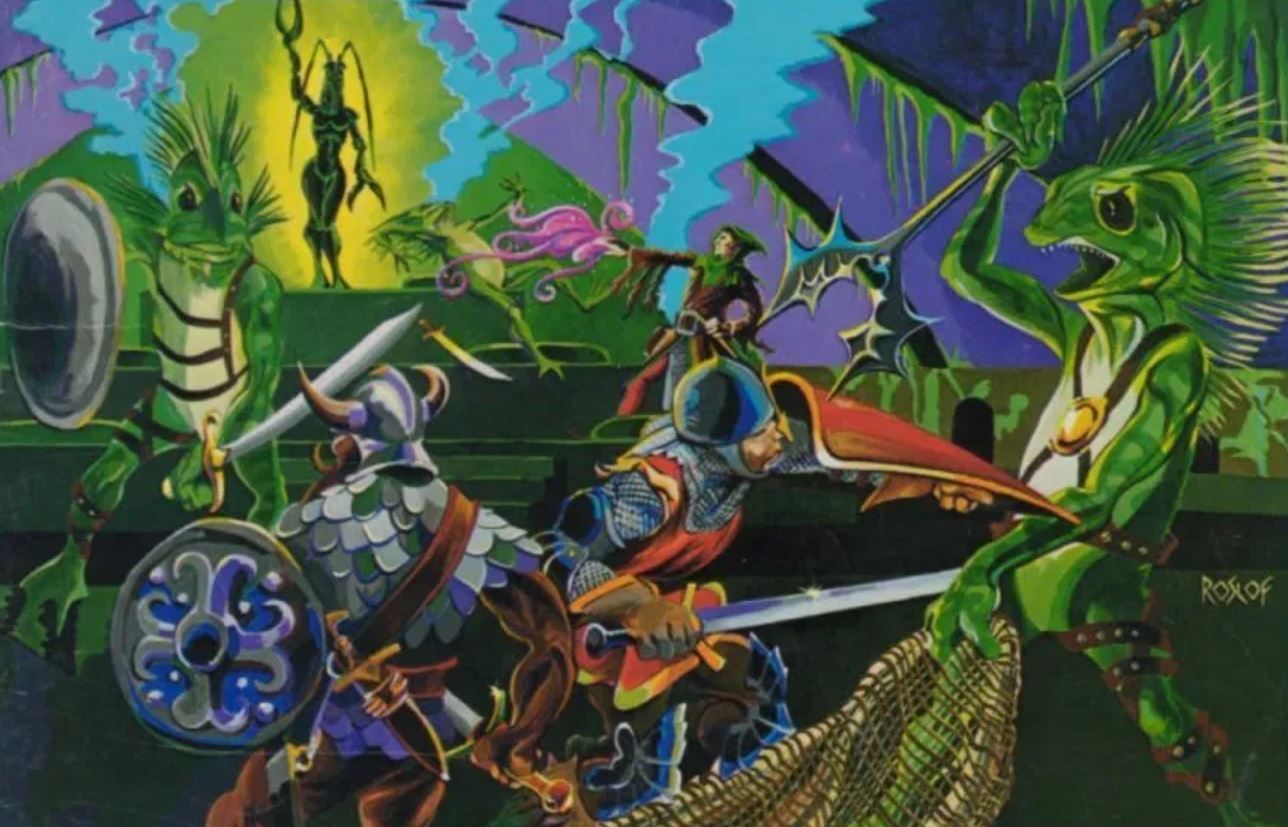 The final confrontation with the giant, King Snurre, and the entry of mighty adventurers into the caverns under his stronghold (DUNGEON MODULE Gl-2-3, AGAINST THE GIANTS) discovered that Dark Elves, the Drow, had
instigated the giant alliance and its warfare upon mankind and its allied races. Numbers of these evil elves fell before the onslaught of the party of adventurers, but many of the important Drow fled away to the northwest – the escape route a seemingly natural passage a full 30’ wide extending endlessly under the earth. Investigation of this area (cloaked by a steaming river of lava) revealed that the passage ran due northwest, slowly descending ever deeper into the bowels of the earth. A pair of hoists on either side of the river of lava enable the members of the party to safely move supplies, equipment, and even mules across the dangerous area without any difficulties. Pursuit of these creatures is necessary, for unless their location and strength are known, the Drow can continue to strike where and whenever they like without fear of counterattack or reprisal. Fortunately, the party discovered a map of the maze of tunnels under the earth – hundreds of miles of passages, areas shaded and marked with cryptic symbols, and what is most probably the course of an underground river! But such an expedition will certainly require the utmost thought and care in planning and preparation. How many persons should comprise the expedition? how will they be supplied and equipped? and what of drinking water? Perhaps certain of the elvenfolk will help, for the Drow besmirch and stain their race, and such aid – whether in magical items, personnel, or both – might well prove the difference between success and failure, life and death. For who knows who or what will be encountered in this gloomy underground world? How will the monstrous opponents sure to be met there be dealt with and defeated? These questions and more must be answered before the party sets forth on its DESCENT INTO THE DEPTHS OF THE EARTH.

Vættur is not the least similar to everything else on the list but it is close. While still within the dungeon synth extended family, the primary attraction for Einbúinn is clean and melancholic piano work with moody synth as a distant backdrop. Vættur not only captures a forlorn longing which feels attached to ancestral memory but also is able to showcase a variety of interesting choices for sound. From wind instruments to choral chants which sound like the cries of ancient seafarers, Einbúinn is intriguing from start to finish. The debut for this artist comes out on Dark Age Productions which has seen a few compilations and reissues from Cernunnos Woods. Whether or not this label is going to continue delving into DS or just ride the line between here and there is of course up tot he future.

I believe Dirge was the last entry in last month’s digest. The later spots are usually reserved for some of the weirder and unconventional acts. Now look at Dirge. This isn’t to say that this artist has made anything less than weird just that the popularity for the type of music has skyrocketed in a scale relative to dungeon synth. Chip music has oddly not been that far from dungeon synth and the creeping influence in the music has created some odd and delightful records. From brief discussions with the artist, the music for Way of the Pilgrim takes on the aesthetic of spiritual music and inspired by the Byzantine modes and tones but is not liturgical music. In fact there is a ideological difference between secular and liturgical music that we are not going to get into. The Way of the Pilgrim continues Dirges exploration in what sounds like Saturday evenings in front of a CRT monitor playing a biblical fantasy computer game. Dirge expands on the initial interest in chip based spiritual music from fleeting novelty into full blown obsession.

Dieux Des Cimetières is odd for many reasons. One it seems to lie on the outskirts of the style despite having all of the normal trappings of the genre. Additionally there are some interesting tags for the release including martial music and neofolk. Add to this a romantic longing for a cultural past and Europa could take on more angles than most are willing to sign up for. On a purely musical level, however, Europa is nothing short of fantastic with aching melodies that are strung over long landscapes of synth and atmosphere. This is the third release from the artist that appeared on Bandcamp just last month and not a day has gon by that I have not been intrigued and fascinated with this music.

[Editor’s Note: The original link was taken down. It has been replaced by the band’s 2017 release]

“The dark fantasy story about a little boy, who destined to become an Executor of dusk forces in a corrupted land Avalgon. Become the Carnifexian – the punisher of Rotten Lord. “ With a banner like that introducing your debut (?) that is intended to be released over segments, how can one not be enticed? Carnifexian is from Russia and the sound of both Chapter I and the recently released Chapter II is designed to appeal to the purveyors of dark minimalist dungeon synth which holds glimmers of regal melancholy.

I sometimes forget that I wrote about RævJäger in what feels like years ago with some of his early work and to see how the artist has become a crucial cog in the current dungeon synth scene. This is evident by his second split of the year this time with newcomer (?) and contributor to the first Dungeon Synth Compilation Nahadoth. The two have decided to go strolling through magical lands and dedicated an entire release to the wonder and splendor of The Never Ending Story. With hat type of enthusiasm it is hard not to crack a smile and embrace fanciful dreams.

Niair de Nasqda seems to be one of many extensions for a Spanish artist named Solar Weave. Alongside black metal, experimental electronic and even weirder things, Niair de Nasqda explores the fictional world of Pichania through a combination of dungeon synth and something edging closer to the nebulous and misunderstood style oof new age music. Tunes from Hidden Places is a fantastic release from an artist that seems to have their head in a billion places. For all of the erratic nature of multiple prospects, Niair de Nasqda rests with eerie calmness in a sea of high winds and dionstant monsters.

Yep, here it is. The album where I am the only supporter. Perhaps it is a quest to go out and find random demos that show great promise and lock them away in some strong box hidden in castle walls. Nestolos has all of the call signs of a demo, from the release name of demo to breif running length to the use of Fragonard’s artwork on the cover, Nestolo seems to be in league with a hundred other new dungeon synth musicians. What is different about this demo is not only the potential for future releases but the already present quality of the demo. From the atmospheric longing of “Magie” to the classic sounds of “La Mort des Deux Étoiles,” Nestolos proposes a wondrous future to go long with their already decent present.

ElixiR was one of my first forays into dungeon synth along with Erang and Hedge Wizard. Ruin of Old things is a collection of forgotten and replaced works not seen on the three previous records. More designed for completetists and ElixiR fans, The ruin of Old things has enough merit and quality to entice new people into the magical world where forest sprites dwell and play sad songs.

Darien Dabnbs is the artist behind Foglord. The Mycelium Chronicles along with all other work under the artists realish name is geared towards dark ambient and real spaced out sounds. Foglord has already had a fantastic release this year with The Healing Gardens and The Mycelium Chronicles is an interesting experiment into the worship of artists like Neptune Towers. This artist has always been geared towards exploration and whether or not people are along for the ride doesn’t seem to be a premiere concern for this psychonaut.

True Norwegian…err dungeon synth. When I collected my monthly subscriptions, Requiem Aeternam was the most recent release by Nazgal Dracul. It is not longer as another full length has been releases. Dungeon synth moves fast and for this artist, covering as much ground seems particular important. Each of these releases come with a palette DIY sounding dungeon synth complete with long exhaustive texts to what seems like historical oddities but in fact are probably inventions of the artist. Somewhere between idiosyncrasies and mad science lies the work of a shadowy vampire.

I promised Einhorn I wasn’t going to discuss his work anymore as I already featured probably three releases this year. Fine. I wont talk abut him. Compendium of Adirondack Geography is a compilation of some of the weirder artists of dungeon synth. Deep within the forests surrounded by castles and dungeons lies shacks populated by witchjes, hermits and madmen. Adirondack Geography seems to be regional devotions geared towards the weirdness of the Adoridacks. Through noise, dark ambient and atmospheric ruminations, these artists praise nature in the same way people do by making odd cairns with stones.

Lets get weird. Actually lets get dark. The Spectral Chamber is everything you expect from an album with that name and other releases such as “The Cave” and “The Tale of the Silent Castle.” Nearing formless, Morannon journeys through the hallways of abandoned structures much like a specter would wen no one is watching. Ghostly and lingering, the phantasms created by this artist is enough to haunt castles for many years.

We are already past weird with this one. I do not think Effuvium ever intended to make dungeon synth but got caught running around with contemporary classical and noise music to really care what time curfew was. Symphony #1 is dedicated to Dimitri Shostakovich with a quote the feels lik it is attributed to the Russian pianist but is another false flag in a theater of odd red herrings. Walking a line of experimental and apocalyptic sounds, Effluvium makes music much in the same way people wake up from night terrors.