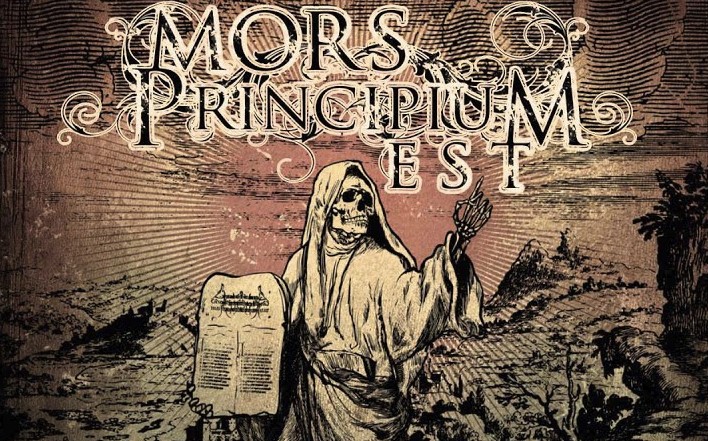 Oh melodic death. It has been awhile. Though your style offers many positive qualities, like catchy guitar solos and songs rife with energy, I tend to always miss the high points in your release history. I seem to always be caught up over at the black metal bar or looking for old heavy metal from the 70’s or getting beat up by old school death metal in an alley. We have not sat down and talked in a while, so I am here. I am clearing my schedule just for you. What have you got for me?

Mors Principium Est is a Finnish melodic death band with a name I have to look at three times before spelling out. When read really fast, the name is just “More Principal Estimated.” I guess I have a financial adviser’s relationship with words. Despite my struggle with the name, Mors Principium Est have steadily been working their way up the melodic death ladder with releases gaining larger critical and commercial success. The band’s fourth record …And Death Said Live was released late last year presumably only in Japan. Regardless of any marketing strategies that only involve Japanese melodic death fans, Mors Principum Est has made themselves into the most eager to learn student in the classroom with their hand always up to answer the question. That is right, this is goody two shoes “always has their homework in on time” melodic death metal.

Melodic death is very recognizable in its qualities. Fast but steady percussion, clean and structured guitar leads, and vocal qualities that are gruff but never unrecognizable. Melodic death, as well as thrash, represent an easy stepping point from clean heavy metal into the underbelly of more extreme metal. It is a style which is representative of both sides of metal enjoyment and is the ambassador of the accessible to the extreme. Due to this quality, it is enjoyable when an album does everything it is suppose to do and nothing it is not. Such as teacher’s pet over here.

Mors Principium Est has relatively stayed the same throughout their career until recently. In 2011, they took on two new guitarists, filling the absence of long time collaborators Jarkko Kokko and Jori Haukio. Longtime fans of Mor Principum Est will notice a gradually more refined sound, which trades in a slight degree of ferocity for streamlined complexity. The instrumental dialogue between newcomers Andy Gillion and Andhe Chandler is exquisite and does everything it should but, most of the time, more. By the closing track “Dead Winds of Hope” listeners can ease their fears of being bored or restless through the album.

…And Death Said Live makes sense. It is never at odds with any other part of the record and has a very functional relationship within itself. The album is almost symmetrical with an instrumental title track dividing two parts in half. Each track dovetails into the next and the whole narrative appears to take on a subtle conceptual arc. The instrumental middle “…And Death Said Live” appears to not just be a mid album jam, but rather the apex of an unnamed story with the later half of the album resolving conflicts from the first. Or I could just be crazy. Regardless of intent or not, …And Death Said Live takes on a welcoming structure. Though the band’s actual lyrical content leaves something poetic to be desired, it is a record which makes sense and, compared to the last few years in melodic death, is nearing achievement. …And Death Said Live colors in the spaces left by so many underwhelming melodic death records of the last…well….let us say a long time. I am glad we got this time to talk melodic death. It was great seeing you. We should do this more often.