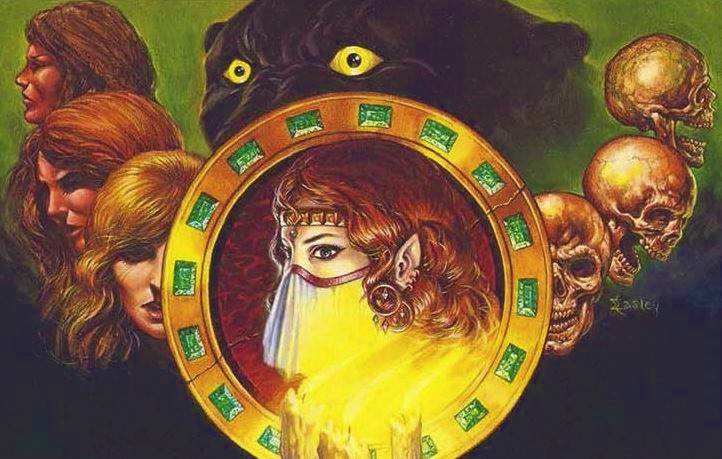 The beautiful elven forest sleeps peacefully about you. Leafy green trees with trunks of silver and white march in blissful grandeur as far as you can see. The trail you walk winds toward the high mountains nearby to the north. The forest’s carpet of ferns and deep green bushes is punctuated by the bright reds, blues, and yellows of the abundant woodland flowers. Ahead, you see sunlight flash off metal lying in the path. Armor-elven armor-and whoever wears it is not moving. The elf on the trail died not long ago, perhaps slain by bandits. His armor is crumpled and useless. A search of the body reveals only a piece of parchment. The message is in both Common Tongue and Elvish. Up the path, at the foot of the mountains, lies the elven village of Hutan-Kota. Beyond it, a great outcropping of black stone thrusts up from the sweet meadow grasses. Here, the delicate elven dwellings mirror the grace of its people. Yet the faces of the villagers seem to mask great sadness. You soon are lead to an elven maid, whose veiled grace and beauty outshines all others present as the sun outshines the stars-she is Rahasia.

What a wonderful way to begin the year in the bleak and serene landscapes of winter. “Saturnales’ music is a hymn to seasons, humus, ice and winds, made for self-dedication rituals and connections with ancient european deities.” Not only is this artist already lock step aside an aesthetic but the addition of non conventional instruments make this an understated joy to experience.

2017 was a success for Thangorodrim with the release and overwhelming support for Gil​-​Estel. Akallabêth is a victory lap for the artist with dive into well treaded territory. Based around the tales of the Silmarillion, this Tolkien themed EP acts more of a short tribute to the famous lengedarium and pays its respects with quite contemplation. Tolkien for dungeon synth is sort of expected but the work of Thangorodrim is established enough to make it a wonderful addition to any collection.

There is something about presentation which makes things more enjoyable. Arcane Cavern, aside from having a cool name, has presentation locked down solid. The obvious low fi angle for this project helps the simple melodies become a journey into a hazy world of darkness and conquest. Add to this the structure of a short narrative and the charm of bedroom synth becomes much more apparent. This is not music meant for large halls rather small rooms with fantasy paperbacks strewn around.

While the dungeon synth scene is wonderful and full of creativity, I enjoy it when outsiders come in and unknowingly create works the pass through the styles economy. ᐊᐳᑦ is the artist which makes up a greater Italian art collective interested in “ambient punk, minimal-synth, dungeon-drone, wartime music and post-nuclear wave.” though this collective has already made a splash in the scene with the 2017 Kolbold release, the seemingly fantasy as art focus is jarring and sort of refreshing with dungeon synth being only a stop along a long weird ride of DIY madness.

I think if I go back through old Dungeon Synth Digests, I will find some criticism regarding Ephemeral Landscapes album design. This is only unearthed due to the artist’s apparent mastery on sound and melody which sharply contrasts a weird visual aesthetic. Mirror Mosaic is yet another stunning chapter in a above average dungeon synth project who needs an overhaul in terms of album covers.

I certainly love it when an artist throws themselves into an aesthetic. Though sorcery and dark magic have always been apart of dungeon synth, Infernum goes right for the altar of the outer gods and tries to conjure something big and slimy. Dressed to the nines in sigils and cryptic words, the invocations of Livael-Itu act as furnishings for a release that is enjoyable as a silent movie with the face of some demonic creature slowly coming into focus.

Damn, DEORC WEG certainly releases lots of music. Since the praise for the Hallow Catacombs release in September of last year, this artist has made 3 releases since then and even has an additional record for 2018. The Dejected Howls Of The Spectre is the last release of 2017 and continues the artists long train of despondency through barren lands soaked in sorrow. It is wonderful just like the other releases to come.

I love series. I also love records that plan and execute sequential themes. In November of 2017, Inoriand released “Bringer Of Cold Winter“ which was a wonderful icy chill for the coming months. Now in the deep of winter, Dwelling In Frost continues this story with three more tracks of frigid beauty. The covers for these releases also pull from obscure landscape painters like Julius Sergius Von Klever whose works survive on places like Tumblr and Pintrest.

Ancient Crypt has its head turned towards the darkness of the 90s or at least that is what is stated in the Bandcamp manifesto. Centuries of Silent Slumber is the debut for an artist who most certainly has an aesthetic which is being worked for and traveled to in dark robes.

I have been following MAUSOLEI since early 2016 with its strange releases adorned with wonderful and impossible architectural drawings. The artist was even kind enough to allow one of their drawings to be apart of the Dungeon Synth Compilation (https://dungeonsynthcompilation.bandcamp.com/album/manuscript-of-a-different-age) . VORPOSTEN continues the artists dives into chambers undiscovered alone and to the knowledge of only a few adoring fans.

So this is still a preorder and at this point, there are only two tracks available with a cover that looks glitched and digitally low-fi. Caught between dungeon synth, experimental middle eastern interpretations, and just an avant weirdness, whatever is coming out of this Bandcamp is going to be fucking weird.