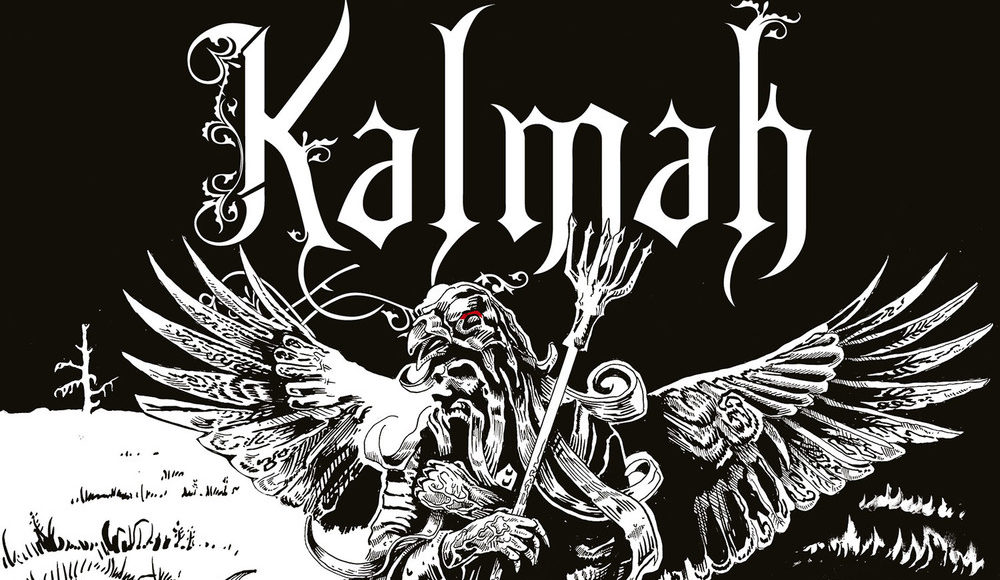 Well, some months have past without me contributing a written piece to the site and now that Kaptain Carbon is the lead writer, I’m apt to look terrible by comparison. However, I’ll try anyway… With 2013 now ended it’s time to pay homage to the band whose 7th studio release is the one I am selecting as my 2013 album of the year.

In a metal world where great bands always seem to feel the need to “evolve” after 2-3 kick ass albums, Kalmah has issued a big fuck you to this fan-alienating process. Instead they have, for a 7th time, decided to continue on the path of crushing fans with brotherly shred in the name of any and all things swampy. Seventh Swamphony is exactly what you would expect from Kalmah and for the reasons mentioned above, I appreciate the dependability of this band. They have managed to keep the songs fresh without deviating from their chosen style. I find that digging deeper into your genre to keep it exciting is just as noble as progressing (read: changing) your style. Though admittedly, not for everyone.

Now about this album. It opens strongly with “Seventh Swamphony”. The perfectly intertwined guitars of the brothers Pekka and Antti Kokko are instantly recognizable as they build up to the involuntary-lateral-head-movement-inducing breakdown at :57. Fuck Yes! This is our KALMAH! “Deadfall” and “Pikemaster” follow a similar suit of heavy melodic trem, shreddy solos and guttural vocals about gods-know-what from the forests and swamps of Finland. I will refrain from fawning over each track in turn so instead I’ll just issue a blanket fawning for the guitars and keyboard orchestration. This is a model of how to interlace keyboards into heavy melodic metals.

The 4th track “Hollo” is one that grew on me over multiple listens. It’s down tempo compared to the previous three and whenever a song breaks the uptempo flow of the album I always get a little nervous that the gas has run out. In those situations it’s usually a good bet that the remainder of the album will get all proggy ‘n shit in a desperate attempt to generate intrigue as opposed to substance. Not so here. Yes, it begins a bit slower, incorporates some clean vox and feels generally out of place on the album, but if you wait until 2:45 you will be rewarded. Suddenly, a Metallica And Justice For All-ish riff sets into motion a series of movements that make it one of the most memorable 2 minutes on the album. High pitch keys, chugging guitars and a choral arrangement lead up to a smooth, harmonized solo section to close the song and the first half of the album.

“Windlake Tale” begins the second half in a fury of pace and precision picking. It gets you immediately back to what you’re looking for: glorious melodic death shred with a hint of neoclassical bach n’ roll. (remember when Children of Bodom used to rule at this?). I’ll skip over the detailing of “Wolves on the Throne” because you get it by now and I want to get to the final two tracks which are my favorites on the album AND a rare occurrence when closing tracks are the strongest. “Black Marten’s Trace” bears a melodic resemblance to the title track of their earlier album They Will Return. However, it’s only a passing fond memory and the song soon earns its own right to rip into your soul.

“The Trapper” is my favorite track and I knew it upon first listen. I do not know what it is about sawtoothed melodies such as this but like EVERY SINGLE ONE before it in melodic death metal, it cuts right to my heart. Obviously it’s impossible for a band to know which song will be the strongest to most listeners, (and The Trapper may not be your favorite), but when it happens, it triggers that all important key performance indicator… rewinding to the beginning of the album. It never has to end…and for Kalmah, it clearly hasn’t.