BEASTMASTER III: The Eye of Braxus 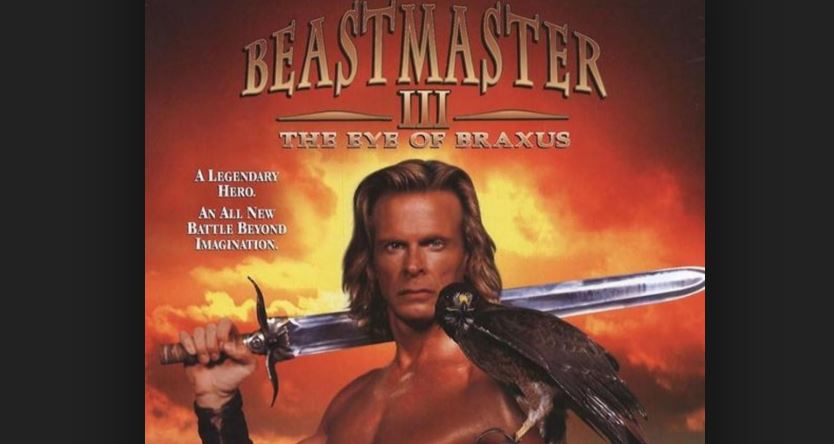 Oh for fucks sake, they didn’t make another one of these did they?

It is important to note that on the Wikipedia page, Beastermaster 3 is said to be the television sequel to the 1991 cult classic Beastmaster 2: Through the Portal of Time. I feel that they either meant the first one or someone is off their rocker. A third possibility was that I did not understand the quality hidden in a movie with Dar driving a car in Los Angeles while the main villain goes clothes shopping. But I do not believe I am wrong in thinking it was beyond the realm of silly. The adventures of Beastmaster and his animal companions were resurrected for a second time in 1996 to run as a television movie. Compared to the second film, which was one of the more baffling films of the decade, The Eye of Braxus scales back, well…everything in favor of pauper level production. Without large sets or lavish costumes, we are left to the devices of the writers and the charm of Marc Singer as Dar, the Beastmaster. I can tell you right now, only one of them will be intact by the end.

The Eye of Braxus tries its hardest to forget the events of the second film. Dar is still a wandering druid who occasionally engages in some poorly scripted action sequences while saving villagers from bandits. The movie reestablishes characters from the first film, which have grown up to be important rulers of sandy villages. Dar eventually learns of a larger plot involving Lord Agon in his quest to obtain the Eye of Braxus. What is this Eye of Braxus? Oh, just an amulet containing an imprisoned demon-god given to King Tal (the little boy from the first film) by his father Zed (the evil sorcerer who tried to sacrifice him over a fire). I guess Tal is sentimental. I could see Lord Zed having access to this type of magic, so it is not the most ridiculous aspect of this film. Please, just be patient. Dar soon reunites with King Tal and his bodyguard Seth, played by Tony Todd, and gets half of the lego amulet from Tal for safe keeping. When Tal gets kidnapped, the adventure starts. It is important to note that, thus far, The Eye of Braxus is somewhat decent. When I say decent, I mean it lacks the elements that make it outright annoying. The plot is clunky and the set and costume design rivals soft core porn but everything is fine. At least in my eyes, that is. I have already mentioned by unexplainable love for poorly constructed fantasy films and Beastmaster 3 sails down a river of warm predictability for the first 20 minutes of its running time. In fact, I quite enjoyed the totally heterosexual relationship between Dar and Seth, which echoes old Robert E Howard motifs depicted in his Kull series. It is just two shirtless dudes kicking ass in the jungle / desert / mountain / place without a care in the world. Yep, nothing to worry about until they meet a girl. Goddamnit.

I have mentioned my hope for independent female characters in sword and sorcery in previous reviews. In fact, I feel the genre does a better job than other fantasy genres at allowing women to become an equal to men. There have been many instances of strong and competent female leads and Shada, played by Sandra Hess, is not one of them. This, however, may not be her fault but rather a symptom of the fantasy film genre and more specifically Beastmaster as a series. The Eye of Braxus does not need a love interest because Dar is not really a sexual person. Though all of the films have had qausi romantic subplots, they are each useless additions to a movie that could just be about trained animals jumping out of trees. Shada’s character feels like a desperate attempt to make this film as unadventerous and mainstream as possible. What is that? Shada’s intentions are not that clear and she may be using Dar to get what she wants. Shocking! Hopefully she doesn’t double cross them somehow…

What I just hoped against in the last paragraph happens 10 minutes later when Shada orchestrates Dar and Seth’s capture at the hands of some local tribesman, which really look like some local college fraternity members dressed in offensive outfits. Because Dar is an already overpowered druid, both him and Seth manage to avoid incarceration and further advance to the final encounter by way of some more useless characters. Dar and Seth enlist the help of a local sorceress named Morgana and a traveling clown named Bey who is wearing full makeup for some unknown goddamn reason. With their help, the team of unlikely heroes breaks into Lord Agon’s desert palace to release King Tal from the clutches of a yet unseen evil. I bet Braxus is really badass looking. He has to be. They can’t fuck this up. This whole movie is waiting for a really well done boss fight. The stuff of nightmares: A manifestation of evil and reptilian rubber.

Throughout this film, one can see the disparity between convincing props and ineffective ones. The Eye of Braxus is at the mercy of a low budget, and because of that it fails to transport the viewer anywhere except for a soundstage with characters wearing modern attire masquerading as period clothing. This point is defined when Lord Agon releases Braxus, a stout man in a full rubber lizard suit who stalks around pretending to be menacing. No, this can’t be Braxus. It’s just his comedic minion, right? Where is the badass demon that doesn’t look like a supporting character for the television show Dinosaurs? Few times in all of my fantasy film viewing have I seen a costume so unconnected to the scene that it becomes something else entirely. It maybe amazing. whether or not the producers thought that Braxus was convincing or they just had no more time for bullshit is unknown. what is important is that this very goofy looking evil is thwarted and the day is saved. I have linked the final fight scene at the bottom of this review for a visual aide.

I mentioned in this review that there is something decent about The Eye of Braxus. There is. Marc Singer, in all of his goofy hawk calling glory, is still commendable as Dar. Despite the costumes, set, story, will to carry on, Singer still plays Dar just like the first film. He is a competent actor who believes in this characters and plays it as best as possible. This is why things like Beastmaster III are still entertaining, as they carry the will to tell stories, as silly as they are, to the best of their capabilities. Beastmaster III is without much capabilities but it still possess heart. By the end of the story, Dar and Seth are urged to continue their journey at the behest of Morgana who has for some reason fallen for King Tal. The film ends just like it should with Seth, Dar, and acrobat Bey riding off into the distance on a quest for more adventures. This is what the film should have been — just a bunch of dudes kicking ass in the desert. No girls allowed. Oh man, is there a fourth one? No? Well, I am not that surprised. But still, it would be cool. I would still watch it.