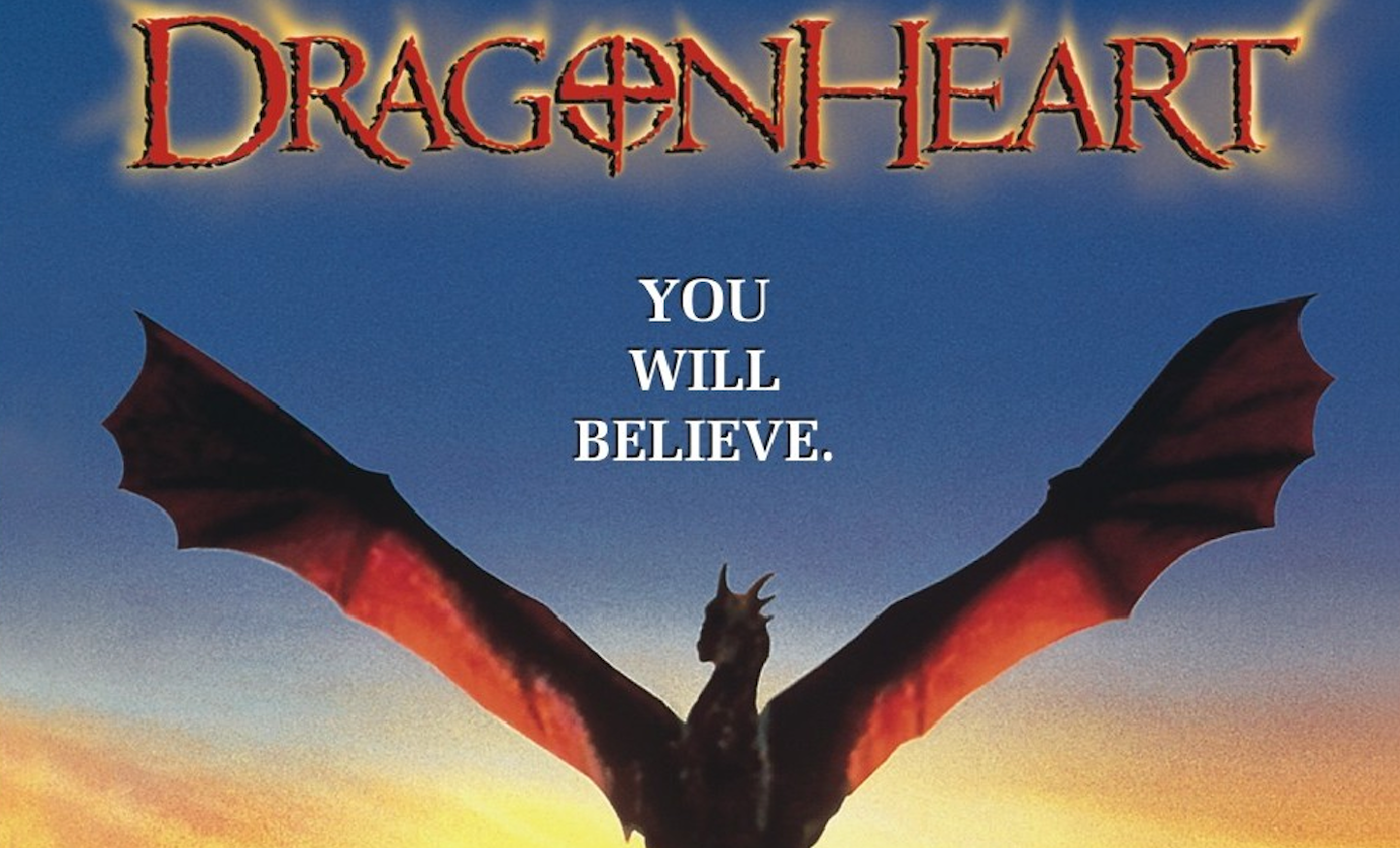 My wife has been waiting all summer for the 1980’s fantasy film boat ride to finally end and to move this ship into the 1990’s. I see she is already prepared for the film with her Dragonheart shirt and stuffed Draco dragon plush. Alright then. Hopefully I do not ruin it for her. I am sorry dear.

DRAGON! 1996’s Dragonheart is a great example of a 90’s fantasy film. Aside from it being both things I just mentioned, it embodies the idea of a 90’s fantasy film. Where in the 80’s we were given dense budgets and a general sense of excitement, the 1990’s moved gingerly within fantasy, trying to keep it as a sort of hushed memory. Compared to films like Fire and Ice, Conan, Dragonslayer, Krull, and Red Sonja, the 1990’s had a very different narrative for film. No one really cared about fantasy anymore or at least, not in the way the 1980’s paid special attention to it. This is why Dragonheart feels so strange. The film follows the friendship between a disparaged knight and a talking dragon as they navigate through a world of tyrannical kings and promises unfulfilled. This would be perfect for 1986 but now it just feels strange. I didn’t say bad. I am sorry dear. If nothing else Dragonheart was just a movie about a realistic looking dragon with 90 minutes of baggage attached. I am fine with this.

Dragonheart takes place sort of before the Renaissance but after the Arthurian period of high morals and maidens taken by dragons. Much like Dragonslayer, there exists a constant questioning of fantasy conventions, specifically the relationship of the dragon within the human world. Bowen, the knight, has worked hard to train the prince, Einon, to be good and just. Einon is a complete dick and does not follow one bit of advice once acquiring the throne. Oh, to make things worse, a mythical dragon even gave half of his heart to save Einon from certain death way early in the film. Einon is played by David Thewlis, [Editor: Expecto Petronum!], who is an outstanding actor that nails the role of the petulant prince who is just downright evil without much motivation. The caliber of emotions given by Einon contrasts sharply with our hero, Bowen, played by Dennis Quaid who exhibits the acting virility of a sack of oats. DRAGON!

I am not going to expand upon a dissection of Dennis Quaid’s acting but I will say that I know he did good work mostly after 2000. From the period of 1987 to around 2000, Dennis Quaid’s career was a steady stream of middle of the road films with Wyatt Earp flanked by a bunch of romantic comedies and supporting acting roles. This is why Dragonheart feels so strange. Because I can literally think of 20 more people, who are not actors, that would better be suited for this role. Quaid’s position as the leading man also contributes to Dragonheart’s direction as a fantasy film that is really trying its damnedest to be a family film. Hold on, we haven’t gotten to Sean Connery yet.

1996 was a rough time for CGI. Watching this film I was prepared for the Draco, the dragon, which was revered in its day, to look fake, unbalanced, and generally awful. Much to my surprise the graphics for the dragon hold up with only a few moments where things look unrealistic. Considering the whole thing is a romance between a man and a dragon, I would call this a victory. Perhaps it was the soothing voice of Sean Connery who, despite not having 90% of his person in the film, carries the role of Draco astoundingly. Oh yes, let us get back to the zany adventures. Here comes evil for no appararent reason and without any cause. Oh look an old blind crippled man, lets shoot him. Muhahaha.

While the intended narrative for Dragonheart is about Bowen, Draco, and some redhead chic fighting against tyranny, a shit ton of the film rests in family land with the two leads trying to trick villages into paying for dragon removal. This shill con is funny given the context of the participants, but most of the middle part of the film seems more concerned with outrunning a cannibal tribe than uprooting a tyrannical king. Add to this Pete Postlethwaite, perhaps the film’s most seasoned actor playing a comedic side role as a pious monk and some subplot about villagers training to fight the king, and one has a head scratchingly bizarre film plot.

Despite the strange formula for Dragonheart, it does have its moments of redemption. The final sacrifice scene with Draco was particularly moving, even surprising given the light subject matter preceding it. Between the cracks of a family film lies death, gore, and general misery. I can understand the sense of nostalgia attached to this film and thus the fond evaluation after. At its core, Dragonheart is about friendship and good in the face of evil and loneliness. The characters, despite their flaws, form a maturing bond that convincingly drives the story. I am using this section to assure my wife her favorite movie isn’t all that bad. Just don’t look at the rating. I am sorry dear.