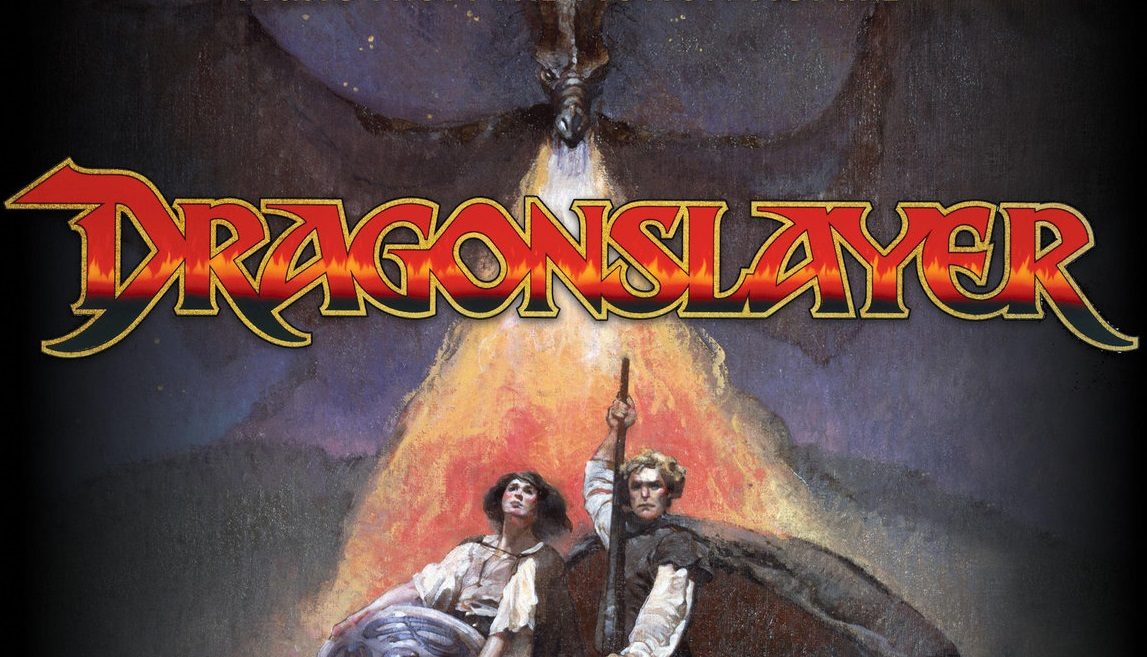 I am glad we got a chance to spend time with Willow. I feel that since starting these 80’s sword and sorcery reviews, the genre has started to become much more defined in my mind. Perhaps I can get a small honorary degree from some mid level university. I do not need any ceremony. Just a luncheon. Let us continue from Lucas’ Industrial Light and Magic and travel back a few years before the great turning point of Conan the Barbarian. We are in 1981 and this is Dragonslayer.

Dragonslayer stands at an interesting crossroads in the land of cultural history. The film was a partnership between Walt Disney Pictures and Paramount Pictures and offered a dark and slightly mature fantasy film for families. Dragonslayer was notable for its visual effects and use of puppets, which was pioneered only one year earlier in The Empire Strikes Back. The film was so revered for its visual effects that it was nominated for a slew of awards but would end up losing against some other movie named Raiders of the Lost Ark. Dragonslayer could have been a crucial fantasy film for the 80’s but a series of unforeseen events kept it relatively obscure. At least for a little bit.

Dragonslayer sports a painfully cliche beginning. A magician is sought to help destroy a dragon who eats tasty virgins. Remember, family film. The dragon/maiden relationship is played on as a bargain between the cave dwelling monster and the kingdom it terrorizes in the sum of one fresh virgin, every season, picked by lottery. In return, the dragon will not set the village asunder in the engulfing hellfire of unholy wrath. How or when this draconic council took place and these details were reached no one will ever know. What is known now is that a group of villagers seek an ailing wizard who can slay the dragon. This would have worked if he didn’t die within the first 10 minutes. No, Dragonslayer is not about some powerful wizard overcoming adversity. Rather, it is about his shithead apprentice who possess zero ability and zero charisma. The apprentice, who I’ll loving refer to as Shithead Mcfuckface, is aided by a heroine disguised as a boy and a group of world weary villagers. If things are starting to get a little too complex for you turn back now, for it should be mentioned that it is only halfway through the film when this group of characters reaches the monster’s lair and accidentally causes a landslide that traps the beast within its cave. The end? What started as a normal dragon movie then turns on its head and transforms into a dense narrative of anti-heroism, lore versus faith, king versus kingdom, social status versus danger, and the many dimensions of a reality based fantasy. Fuck, this is actually good and I even hate the main character.

Dragonslayer, despite its innocuous exterior, is a grey world caught between legend, history, and religion. According to the film’s writer, “..our film has no knights in shining armour, no pennants streaming in the breeze, no delicate ladies with diaphanous veils waving from turreted castles, no courtly love, no holy grail.” This grey fantasy motif is now popular due to the blockbuster success of George RR Martin’s Song of Ice And Fire. But to roll the dice with a family film on basically the same premise 30 years earlier must have caused some 80’s executive collars to tighten. Oh shit, the princess is getting her limbs eaten off by dragon babies! 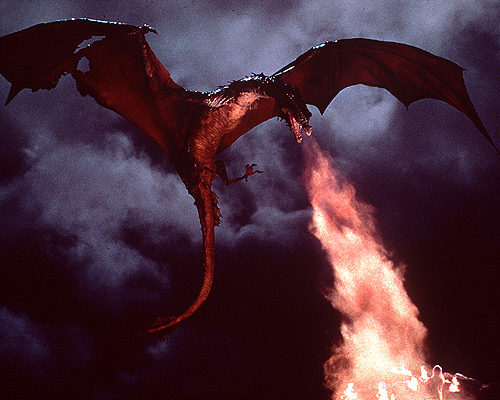 Even though the film has a strange start with an unsure direction, Dragonslayer ends strong with the weak and petulant king being named dragonslayer after the apprentice and virgin in drag thwart the mighty beast with the help of the dead wizard. The sour closure casts a further conceptual net by alluding to the motto that the powerful control the flow of history and social class will always determine the ones remembered. By the end of Dragonslayer, one is left with a resonating feeling of general thoughtfulness, something that a movie classified under “fantasy film from the 80’s” usually never does.

Dragonslayer is often cited by a host of writers and directors as being a shining example of a true fantasy film. Take this and compare it to its failed box office performance and one has a forgotten relic steeped in cult-like status. Even today the film does not retain the legacy and name recognition Conan, Willow, or maybe even Red Sonja have. I see it though, as a martyr for story based fantasy. There is no way this film could have made it. It is all a part of an anti-heroic allegory where the legend of Saint George and the dragon is inverted and everyone likes the dragon more in the end.