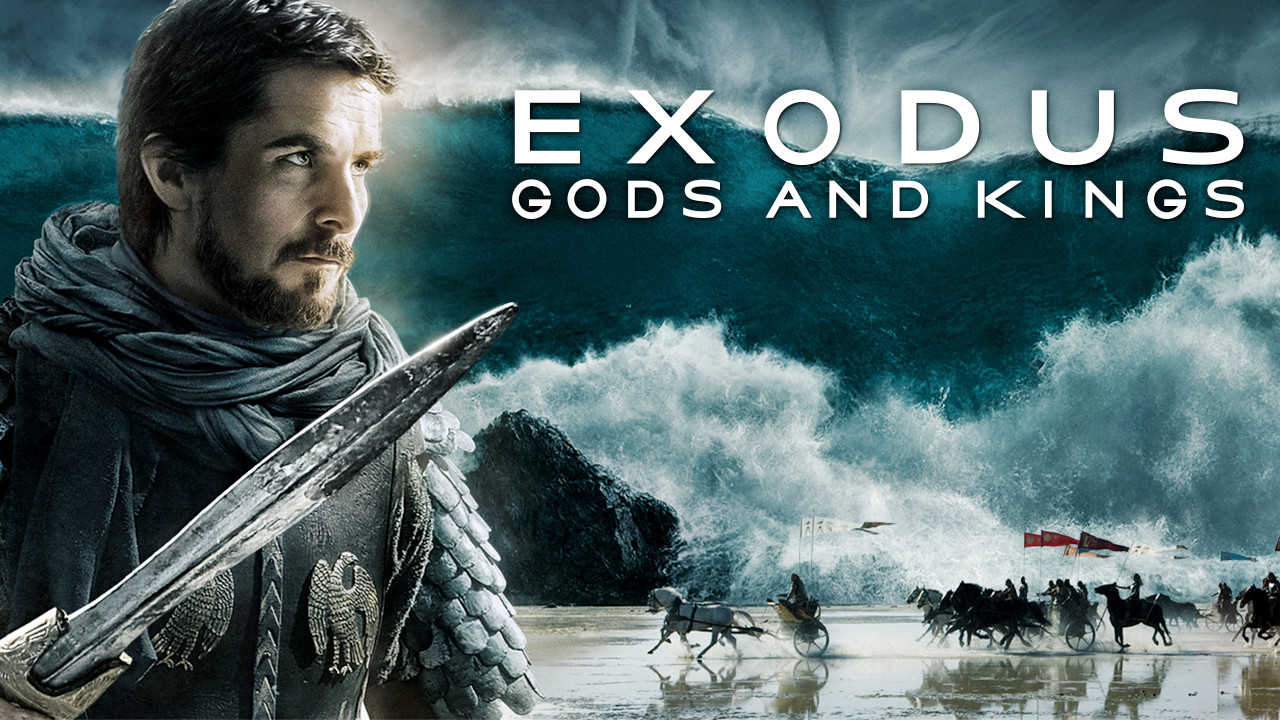 Editors Note: That cant be the real fucking poster can it. No. that is a joke mock up for the real poster. Come on.

Exodus: Gods and Kings came out during a special year in which I had already spent a considerable amount of time reviewing newer sword and sandal films such as 300: Rise of an Empire, Pompeii, and both Hercules films. 2014 seemed to be a ripe time not only for a mild resurgence of overstuffed sand fantasy films but also possibly the return of the large budget and grand scope epic movie. Exodus follows on the heels of the less than praised Noah film, which also attempted to recreate biblical events into cinematic and commercial coin. Of course, both films should be measured on different scales, but both somehow manage to take source material already epic in scope and turn them into a long exercise in tedium.

Exodus has a lot of things going for it. I mean it is almost impossible not to like the idea of the film. The cast, director, budget, set design, music, and existing storyline should all be enough to make the film a potential holiday tentpole for the year. Director Ridley Scott is no stranger to grandiose films as he has already seen success with Gladiator and Kingdom of Heaven. Exodus already comes with potential markets covering a religious fanbase, fans of ancient history, and just general people who like Scott’s films. There is no way this film could be anything less than amazing. Right? Let my People Go…wait…not yet…wait…not at all? Why am I here then if not to make that joke?

In terms of scope and time covered, Exodus is almost symmetrical to 1965’s the Ten Commandments. In place of Charleston Heston, Christian Bale depicts the stoic yet very human character of Moses. Though Exodus doesn’t begin at the beginning of Moses’ life with the basket and the child murdering decree, the film follows the accomplishments of the man as a military general in Pharaoh Seti’s army and concludes with the exodus of the Hebrew people from the reign of Ramses II. After an epic battle with the Hittites, Moses’ s half brother, Ramses II, succeeds his ailing father and appoints Moses as an aide to the court. After visiting a Hebrew slave site, Moses has the knowledge of his true identity revealed by a group of Hebrew elders. Ramses is already wary following a prophesy during the battle with the Hittites in which he was saved by Moses, fulfilling the foretelling of how a divine leader will be chosen. Hint: it’s not Ramses II. Moses is outed as a Hebrew orphan and sent to exile in the wilderness of Egypt. Everything I just mentioned takes place on a pretty decently paced track of about 30 minutes. Once Moses reaches the desert however, the film mimics the barren atmosphere with a large chunk of the film slowing down to a glacial pace. In what feels like real time, Moses walks, gets married, and climbs a mountain to find a bush and a boy who he believes he is God. Man, god is a little snot.

Compared to most other religious text, the Old Testament was filled with interesting characters that had very human, glaring flaws. Moses was not immune to this as the biblical stories surrounding the man are filled with tests of spiritual turmoil, mental fortitude, and willpower through some struggling times. Christian Bale as Moses makes sense as an actor who can portray these very nuanced emotions. Moses in Exodus however never really breaks as a flawed character and always seems to be the underdog that will eventually get his comeuppance. Though the film makes subtle attempts to show his doubt, Moses as a character in the film is near unbreakable. Even God is more flawed as a vengeful and impatient boy who wants nothing more than the overclass of Egypt to feel fiery wrath. What is left is a distanced character in a story whose ending has already been spoiled centuries prior. I am sure the horse will be fine.

Throughout Exodus are attempts to demystify the events surrounding the Hebrew exile. This is something that worked surprisingly well in Troy and is given a go in Exodus. Though things like the seven plagues and the eventual parting of the Red Sea are given flimsy scientific reasoning, along with Moses’ potential mental disturbance following a mudslide on a mountain,the supernatural aspects are pretty much assumed to be, well, present. Following Moses affirmation as a leader, the second long stretch of the film comes in at an almost crawling montage of training a Hebrew resistance how to fight and Ramses getting more infuriated at the 10 plagues. Following the the death of his oldest son (portrayed in the film as his only son instead one of 100) Ramses lets Moses people go without much fuss. Get out of here, and don’t let me catch you and your chosen people around here anymore. The mass exodus of people enacts the third crawl of the film, which is a bunch of people getting to the Red Sea while Ramses double crosses and tries to hunt them down. The film works its way up to the parting of
the red sea and the eventual drowning of everyone but Ramses.

The parting of the Red Sea as the climax works well on paper but is incredibly boring on screen. Not only is there the knowledge of what is going to happen, but key clips were already spoiled in the trailers. The execution of a bunch of people crossing shallow waters while a flood wall looms over them is surprisingly less exciting than in concept. The film also makes great strides to show the confrontation of the two brothers in the middle of the sea but seems to make it less believable when both survive. Though the villain must have some sort of reassessment of the events, having Rameses not drown is just sort of silly and unnecessary. This is, of course, me criticizing biblical interpretations of historical events.

The only reason why I am critical of Exodus is that for a story with such drama, Scott decides to focus on strange aspects while downplaying others. The creation of the Ten Commandments, which played a famous part in the 1965 film, is almost done as a postscript and near important people, like Moses’ brother Aaron, are almost completely omitted. While actual biblical history is less family and cinematic friendly, the turbulent events of the bible are turned into 2 hours of fence sitting that manages to not really excite any demographic it already had built into its audience. For the amount of money Exodus spent on its lavish monuments, the humanity of the original stories is lost in pomp and Exodus ends up making the Bible look exciting in comparison.