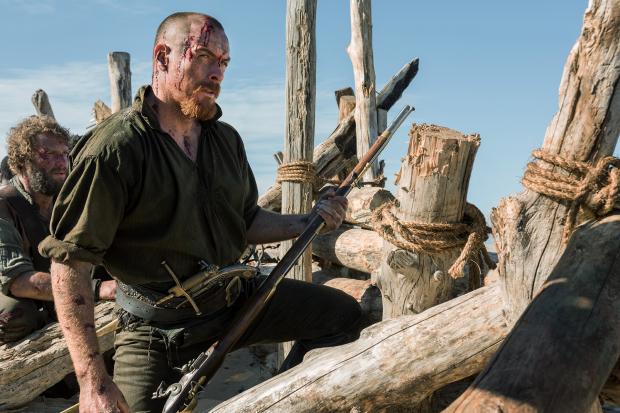 Alright the end of Black Sails season 3. Let us catch up on where we are in the wild and wonderful world of irate pirates, aka Black Sails. Charles Vane is dead. I know, I have talked much about how this show sometimes hangs out in the doldrums and never shifts its large cast of characters, but my goodness, they actually killed an important character. For now. This sets into motion the large plot for upcoming season 4, which is the piratical (hopefully that is a word) resistance against the ire of Spain / England who are reeeeeeeeeeeaaaaaaly concerned with finding a single chest of jewels when they likely have the lion’s share of the Urca De Lima treasure already in safe keeping. (Gold they themselves stole from the indigenous civilizations of Central and South America.)

The reason for saving this last episode of Black Sails for its own review is important, as the final episode is really separate from the rest of the season. One could think of it as a keystone for the entire show as this is what the whole season was working towards. The episode even jumps around, dropping the viewer into battle while flashing back to take care of the more delicate aspects of the season and even side stepping to the less exciting, but equally important aspects, including Elizabeth’s Guthrie’s descent into everyone’s least favorite character spot.

I have been confused about Guthrie for ages. Once proposed a headstrong leader for a rogue community, this character has been through the spin cycle of waffling allegiances that, if I were a rogue, I wouldn’t be happy with her anywhere. She as a character is perhaps the most uninteresting and frustrating aspect of this show, despite her probably being the most realistic. In all honesty, a person like Guthrie is the stock composite of a bunch of flawed, weasely, downtrodden personalities of this time period. Nothing they do is really heroic and they seem to be in over their head at all times. While the realism is certainly remarkable, its place in an otherwise pulp atmosphere feels haunting.

Before we get back to fighting, let us resolve some things about Captain Flint. At times through this final episode, him and Silver are having a fireside chat about his inner conflict and demons. If we really look at it, this whole series as been about Captain Flint’s personal war with a variety of enemies, each getting bigger and stronger. His crew keeps following him into battle without saying much in the way of resistance. Flint spills his own beans about his scandalous relationship with Barrow and his secret love Thomas. Silver is worried that he is going to meet some disastrous end for knowing the true Flint, but I guess we’ll see about that later after more fighting. This chat is spliced in as a parallel scene to the action that is already many hours ahead of time. This whole structure of the episode works so well, I am sort of upset that it has to end.

Let’s talk about an aspect that is getting better as the seasons roll by – the action. The final episode in Season 3 really sees the action of this show lock into place. From wobbly cameras to dynamic sound, the realism of musket fire and mortar shells is quite striking, with the action being the centerpiece of interest. Once the dramatic music flairs and the drums start pounding, the heart of this show really takes hold. Captain Flint tries to hold off a beach invasion that ends in a bloody exciting battle. The pirates retreat into the jungles of the slave camp and send Mr. Dobbs to “convince” the captain to lead the english into the jungle full of possible spiky traps. Hornigold, who is leading this thing, sees no reason not to trust a pirate. None at all.

Hornigold leads the English into the dark jungle, where no one could ambush them, right? Then all of a sudden… AMBUSH. This action mirrors Captain hipster-Beard, Rackham, and Anne as they do sea battle with the English and win by literally swimming to the other ship and taking it over. ARRRRRRRRRRRRRRRR. This shit is so wacky and exciting and the cinematic effects of a ship covered in billows of cannon fire is enough to send me into reels of excitement.

The end of Season 3 sees the melding of what is happening in the show with the construction of classic fiction. The resistance is constructing a legend around Silver’s stature and making him into a character that people can rally behind. I look at my watch and it’s been three seasons and it seems that this show is nowhere near out of ideas, rather just getting better at things. If one thing can be said about this show is that it is confusing. I have been wooed, disgusted, thrilled, and bored by this show all in the matter of episodes, but the finale of Season 3 has left me feeling as if Black Sails has a possibility of flying even higher in the 4th season. If Black Sails manages to do that, it will be something that few managed to achieve.