Casual Magic: The Fate of Brawl 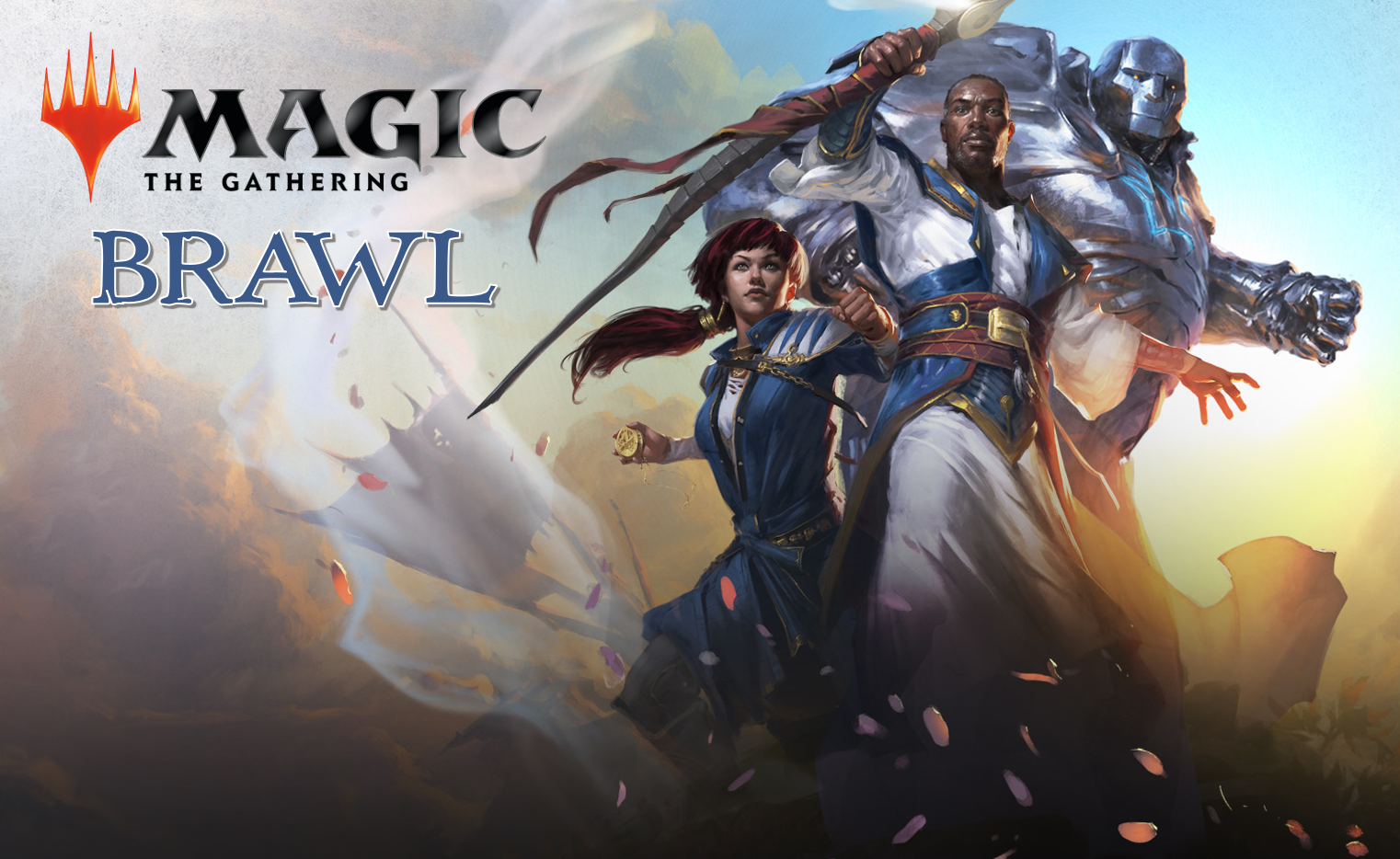 I wrote the title a few weeks ago after attending the Star City Games Open in Baltimore. The dire title reflected my thoughts when exactly zero events for Brawl fired over the course of the weekend. In fact, Brawl became a lighthearted joke for most of the open when the announcements looking for players to fire a pod were met with chuckles and banter. Even I shared in the amusement for this format that seemed to be doomed before even beginning. I was one of the few waiting for a 4 player pod to fire. I still laughed. How can one not go with a format this comical?

The SCG Open took place 5 days before the article “The Future of Brawl” was published on Wizard’s site. The article, written by Gavin Verhey, outlined the goals and reasoning behind Brawl and addressed some early concerns with the format. One of the biggest concerns from the community was how to balance the format with bans and restrictions that shared its regulations with Standard. Brawl is meant to be casual multiplayer but has a 1v1 competitive aspect that people found just as fun. The singleton structure allows for more variance than standard but the access to a constant commander make certain things more reliable than standard. Could Brawl and Standard have the same banlist? Would there be a separate 1v1 banlist? All of these things orbit a format that is so new that most people, including the ones chuckling at the SCG Open, do not even know what to think of it. The combination of misinformation and over-hyped rollout has almost doomed a format that could be really fun and interesting–as is the case for my casual playgroup. For a group of new players, Brawl has become not only a great way of exploring a set but also an obtainable deckbuilding goal for some who are overwhelmed with both Standard and Commander. I just hope people continue to play.

My interest in Brawl stems from my interest in how formats are created and evolve. Looking back at now premiere formats such as Standard, Modern, Legacy, and Vintage one can see how they were created and evolved from player interest, feedback, and tournament play. Casual and variant formats such as Commander (EDH), Tiny Leaders, Frontier, Pauper, and Cube were community created which saw varying levels of support from Wizards. Some of these community formats are seeing long lifespans versus others whose existence was reduced to a few months. Brawl, to my knowledge, is one of the first casual created format rolled out for the community and has thus suffered the trial of user feedback in a live arena. It also comes on the heels of Wizards continual tinkering with production, formats, and rule changes. One of the better aspects of the Verhey article was how the designers at Wizards were looking at Brawl and taking into account how it would fit in the landscape of formats. They were also very willing to listen to community as well as standby principles of what they believe the format should strive to be. Despite the hotfixing of format only a month old, the article shaped my understanding on how I saw this format as a meme level flop to something that could actually be maintained and cultivated.

If one does not know what Brawl is or even the world of Magic, then the changes to Brawl would mean very little or even make sense. For the niche group of people playing Brawl, or interested in Brawl, the changes (separate banlist for standard, 20 life for 1v1, solution for colorless commanders) were a boon for players who enjoyed playing but thought this format already solved. The importance of casual multiplayer but with acknowledgment of a competitive arena has given reassurance to Brawl as a potential success across multiple interests. Still situated between Commander and Standard, the audience for this format seems to be intended for the players who draft and even build Standard decks but want to play socially and for something resembling fun. As an experiment, my group has been running Brawl as one of the premiere ways to experience a new set and has since been engaging for new players. My group consists of a handful of people returning to Magic after long hiatuses, one person completely new to Magic, and a me who is pretty bad at Magic but enjoys deckbuilding. Brawl seems to be a way for us to to get together, research new sets, and play socially and have something resembling fun. Brawl, for new people, seems to be an easier way to approach Magic with the structure of long term playability.

Our stupid playgroup does not have anything to do with the larger Brawl community as it is just one example of people having fun. Perhaps this is what Wizards intended. Our multiplayer games are long enough as a large nightly event but shorter compared to one EDH games. The 30 life in multiplayer as gives a greater sense of danger compared to EDH’s 40 and the reduction of boardwipes and other reset buttons which makes for quicker games. The existence of multiplayer politics, much like EDH, off sets any dominate deck and for our playgroup the curve of learning throws in a aura of unpredictability. The existence of 60 cards vs 100 means that new players have to learn the interaction of 36 spells / 24 lands versus 64 spells / 36 lands. For the majority of the playgroup who loves to play but is overwhelmed with information, this is a breath of relief.

The singleton format, much like EDH, makes buying certain expensive cards easier as only one is required for the deck. While some bemoan the rotating aspect of the format, singleton rotating may affect only a small pool of cards versus play sets of key components in Standard. While Brawl seems like a pretty rigid place for new players to start versus the ~60 card kitchen table pile of junk that most people start with, Brawl possess the randomness loved by new players with stepping stones towards eventual focus within a general playing field. The scope of standard ensures some sort of balance as wild power cards can be introduced later with other formats. Even if Wizards does print an oppressive card in standard the singleton format softens the ability for it to become dominate as long as it is not your commander and named Baral. Brawl is a pretty genius introduction to structured formats and I am almost certain Wizards never intended it to be this. Even if they did not, it has been wild and fun.

From the above picture you see our playgroups Commanders with aggressive early game decks (Admiral Beckett Brass / Adeliz, the Cinder Wind), two decks that play well in the midgame (Raff Capashen, Ship’s Mage / Huatli, Radiant Champion) and one that waits until the very end to win the entire thing (Muldrotha, the Gravetide). I wanted to build Raff Capashen, Ship’s Mage since first seeing him spoiled and reading his loose backstory in the narrative. Opening a foil promo during prerelease was an extra boon for a style that I already loved. Similar to the UW Control Standard build, Raff Capashen is a control deck but instead of grinding away and winning with Teferi or Gideon, Raff flashes in big creatures as finishers. The ability to hold up counter magic / removal until the end of turn and then play spells with Raff’s ability makes for a gameplan that happens mostly on other people’s turns and also a plan that can easily fall apart if Raff is removed. Cards like Settle the Wreckage are devastating for token decks and any other aggressive strategy. Muldrotha is the only commander that is happy to wait around until late game but UW’s cheap bounce and Muldrotha’s heavy mana cost makes it an easy fix. There is no Approach the Second Sun which is popular in some UW control decks and it is mostly played for the fact of throwing big creatures in at instant speed. This build is also preparing the arrival for Ranvinca’s Return and the return of my favorite Lawful Neutral guild The Azorius Senate. Sure we still have the Core 2019 set to get through and by the time Ravinca returns, Ill lose things in this deck like the Gearhulks but something tells me it will be just as fun in the future.

Brawl as an experiment for teaching new people to play Magic has gone exceedingly well in a hobby that can be daunting and expensive for people. While I do not think of Brawl as mini-EDH, the format has stepped in to be a medium between the formats and exists, at least for us, as a surprising event that no one really saw coming. I will be interested to see how this format evolves and even if my playgroup is the only one still coming back to it. Even if there are no Brawl pods at GPs or Opens, the format seems able to survive as long as there are 4-5 people interested in playing and having something resembling fun.