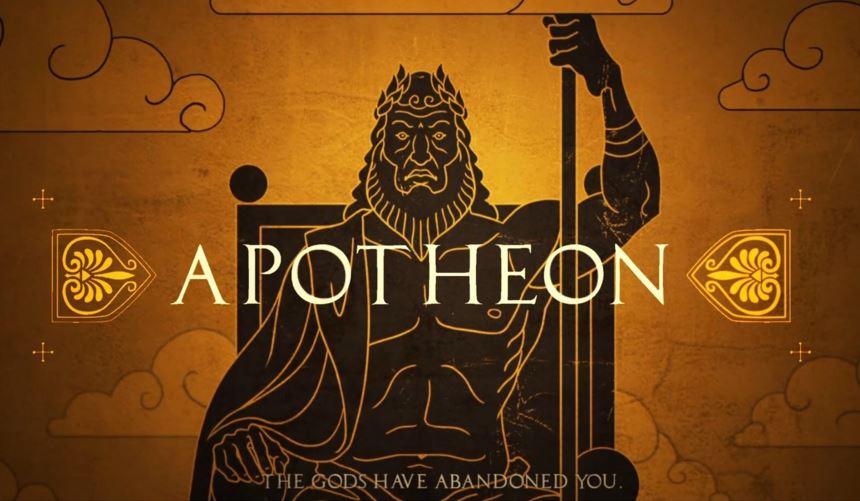 Apotheon is the story of an ancient Greek warrior who, finding his country betrayed by the gods, goes forth to seek justice via a raid on Mount Olympus. It’s not the most original considering this is basically the only plot we know how to tell with Greek heroics and it might also sound a lot like God of war on paper (Any/all of them. Each new iteration is a love letter to the find/replace tool) but the way it succeeds is because it tells it in a different way.

Though not a new one, admittedly. This is Metroidvania all the way to its ancient, blasphemous heart, complete with vertically based 2D levels, weapon pickups, and the occasional giant bastard with a single, tiny weak spot that you’ll have to find novel ways to poke him in. Naked satyrs have the full Greek nudist treatment, as much as i’d rather they didn’t.

Enemies are all typically human shaped, giving 1v1 battles a good balance and, since everything comes down to equipment and armour, there’s no grinding involved, thank the gods. Combat itself has a good flow, thanks to the fact that everyone’s kit breaks. Obviously this is a bigger problem for the player than their enemies, simply because of your extended life expectancy, but the ability to smash your opponents’ shields adds speed and frantic energy to the fights. There’s definitely motivation to fight carefully, sustaining your weapons durability and dodging blows cautiously, keeping your decent weaponry alive and deadly, but if you’re getting sick of a particularly defensive enemy, there’s no reason you can’t shatter his sheild with a kitchen knife and turn their kidneys into patte.

Unfortunately combat, one of the games primary focuses, is also its major letdown. Violence feels clunky and meaningless with characters flying about at the slightest poke of a spear. The 2d silouetted styling, combined with the fact that characters can walk straight through each other, means that combat can devolve into a mishmash of flailing limbs and aimless, panicked thrusting faster than group sex during a power-cut.

Thankfully it’s a lot more pleasing to look at when everything’s well lit and working. The art style is clearly inspired by Greek pottery, a solid color background with black silhouettes representing the characters and the occasional splash of colour on clothing or a shield to prevent everything becoming indistinguishable. Having said that, at times indistinguishable would have been better, especially considering the early game helmet that looked, to me at least, like it was adorned with a big floppy green dick poking right out of the top. That particularly I could have suffered being left to the imagination. If you’re well versed in Greek lore, you’ll know that Nobody hurts a fucking cyclops.

I even enjoyed the mute protagonist, partially because it seems strangely apt in a story about the culture that invented stoicism, but mainly because it’s up to you to decide what’s going on in his head. Sure, it’s possible that they’re filled with grief, joylessly pursuing these immortal beings in quiet loathing with no wish beyond his own glorious demise, but it’s equally possible he’s a barely contained ball of visceral glee, eyes joyful as he hacks apart the gods themselves for no other reason than because he can. While it’s fine to criticize the game for its absent characterization, the gods, the art and the world itself are all vying to supply character, and I don’t feel a little negative space does anything but strengthen the effect. This is a game of silhouettes, after all. And when you consider the incredible simplicity of the plot, it’s hard to imagine what personality he could have had that would have served a purpose beyond the risk of irritation.

It’s a game worth playing, if you’ve any interest in Metroidvanias, though anyone capable of enjoying the rush of jabbing a man with a spear and launching him 30 feet through the air will find it more than satisfying.