INTO THE BLACK – The Inside Story of METALLICA 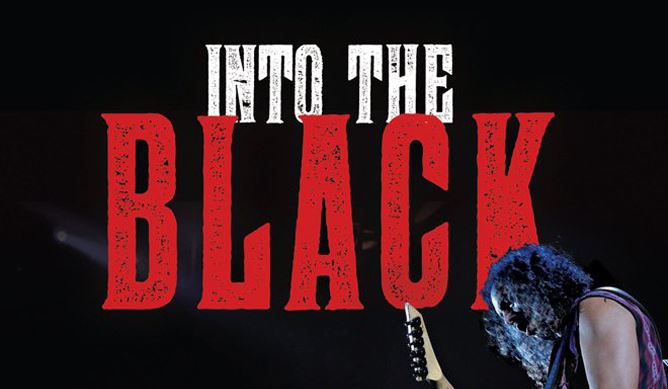 Oh cool, a book on Metallica. Oh wait, this book is only about the worst era of Metallica? Fuck.

The history of Metallica has been mined and discussed numerous times in numerous books. In fact, the two Authors of Into The Black: The Inside Story of Metallica wrote a similar book on Metallica in 2013. Birth School Metallica Death: The Inside Story of Metallica: Volume 1 all detailed the formation of the band up until their breakthrough success with 1991’s Eponymous AKA The Black Album. Into the Black picks up the story and carries the reader into 2014 after the disastrous project LuLu with veteran Lou Reed. I am unsure whether or not this book is volume 2 of the Metallica opus or whether there will be another book coming up that will be covering similar ground. What is known is that both authors, Paul Brannigan and Ian Winwood, are veteran journalists of numerous music publications that have dedicated themselves to bringing readers the story of Metallica’s lamest, most unflattering, and sobering period in the band’s history.

Into the Black attempts to frame the ambitions and shortcomings of Metallica following the success of The Black Album, which took an already successful thrash band and propelled them to stardom. The book faces a task of discussing the apparent, since Metallica’s history subsequent to The Black Album has been noted as a litany of ungraceful disappointment and unartistic folly. The trials of an artist under pressure can be interesting, as a creative force is coupled with the burden of extraneous problems from the direct result of their artistic fame. Unlike other stories, Metallica’s rise and staggering in the spotlight is nowhere near as sexy as it has been portrayed before and is mired in what seems like spoiled bickering, delusional missteps, and decisions that alienated them from pretty much everyone. None of this makes for heroic storytelling. Despite the obstacles of Metallica’s history, Into the Black does give insight, and possible foundation, of a metal band faced with something they were possibly not ready for, managing it all with the grace of a surprised goose. If one was unfamiliar with Metallica, the band and possibly their history, it is almost painful to retrace a very well worn past. This thrash band from California found themselves not only underground heroes following the success of their first three albums (Kill Em All, Ride the Lightning, Master of Puppets) but soon metal royalty after their Grammy nomination for the song “One” from 1988’s And Justice For All. This directly led to the breakout of the band in 1991, and subsequently their taking over of the entire planet. After this success, the band’s next three albums became the worst reviewed records in their history, bottoming out with 2001’s St. Anger. In the larger narrative of Metallica, 2008’s Death Magnetic was heralded as a return for the band, but this belief is either a talking point for magazines or gentle words for a band that has little place in current metal culture. There was also that thing they did with Lou Reed.

Paul Brannigan and Ian Winwood have been contributors for Rolling Stone, Metal Hammer, Q, and Classic Rock magazine. The two are also one of Metallica’s top biographers, if nothing else than for the access granted to them. You could say both of them know Metallica on a personal level. Because of this obvious closeness to the band, Into The Black seems unflappable in its personal connection with the band. The assessments on controversial albums like Load, Reload, and Lulu come with apologetic defense, which may seem brave for the authors but comes off more like defense of an old friend. It is this conflict of interest that makes Into the Black feel less like an inside story and more like a softball editorial piece on a band whose history is very well documented. Alternatively, some of the more edifying parts of Into The Black come from its wider scope. Drummer Lars Ulrich makes up the majority of focus for the book, with Guitarist James Hetfield and Kirk Hammet in tow. Ulrich, for better or worse, has always been the band’s PR and face, as he has done the most conferences and interviews. Because of this, Metallica’s story from the 90’s and 00’s is echoed by the interviews and increasing frustration from the band’s outspoken drummer. Ulrich also seems to be the most verbal and first to rush to the defense at any criticism. Into the Black starts to form a picture of a band who never stopped being innovative despite the deterioration of public support. Late in the book, the authors make a subtle comparison/jab with Slayer from a Kerry King interview at the Big Four European tour. In the interview, sentiments used by King while he is backstage boasting imply that Slayer sticks to a formula and has never changed throughout their career:

“We’re the thrash version of ACDC: you know what you’re going to get when you come see us. We’ve basically done the same thing for twenty five years so it’s like we come with a guarantee: we’ve always delivered. “

Depending on how one views the career of Slayer versus the career of Metallica is how that statement sits and shines relevance on heavy metal as a whole. Metallica, for better worse or worse, still has always tried something new. By the end of Into the Black, I became convinced that no amount of decisions could have changed the way Metallica operated at that celebrity level. They did the best they could given the circumstances.

As an in depth look at Metallica, Into the Black offers nothing in the way of exclusive access or stories that couldn’t be pieced together by reading other publications. The majority of the album reviews that have been stitched within the text feel unnecessary. What Into the Black does do, however, is try and make sense of all of the nonsense that followed a golden period of both commercial success and critical praise for Metallica. The years following The Black Album are perhaps unique to Metallica, as I am trying to think of another band that has ever had the same narrative. There has been no one before that could give advice or clarity to the steps they should have taken. Metallica are truly trailblazers. Despite the connotation of that being positive, there are sometimes trails that lead to darker and more confusing areas. Metallica’s history ends, for now, with their first feature length film Through the Never which was released in 2013. Decide for yourself whether or not the band has made it out of the muck on top.

INTO THE BLACK: The Inside Story of Metallica
Publisher: Da Capo Press (November 4, 2014)
Written by: Paul Brannigan and Ian Winwood
Website: AMAZON

Tags: Hollywood Metal, Into the Black, Kaptain Carbon, METALLICA, The Inside Story of Metallica
Categorised in: Books