THE FLIGHT OF DRAGONS 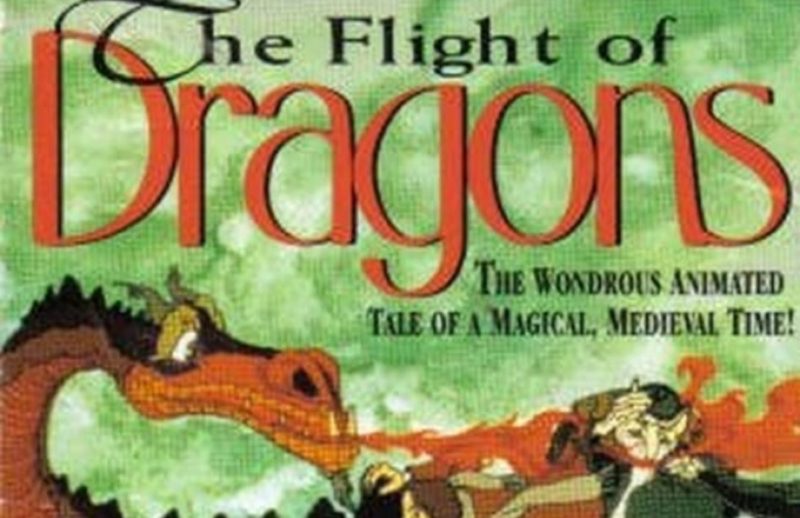 Oh hey Mrs. Carbon. Since you sat through Krull last week, what do you want to watch tonight? We have the Flight of Dragons or Exc—Oh, I see you are already sitting on the couch and dressed up for this. Yes, that dragon tail is adorable. The Flight of Dragons it is then.

If one grew up in the 70’s, 80’s, or anywhere close after that, they probably at one point watched an animated film by the production team of Rankin/Bass. The directorial duo would become renowned for their traditional and stop motion animation as well as their stupidly large holiday productions. Rudolph the Red-Nosed Reindeer (1964), Santa Claus Is Comin’ To Town (1970), and Jack Frost (1979) all still run somewhere late night around December. Along with vintage and slightly surreal holiday television specials, Rankin and Bass also produced a string of fantasy animations including the Hobbit in 1977, The Return of the King in 1980, and finally the Last Unicorn and the Flight of Dragons in 1982. The time of production was at a high point between traditional animation and a period where kid’s movies hadn’t succumb to being complete tripe for idiot children and their idiot parents. It was also a time when fantasy films could be thin veils for some far left wing philosophies. If a confusing plot wasn’t enough for children, how about some basic tenants of postmodernism?

The Flight of Dragons tells the seemingly simple story of Carolinus, a green wizard dismayed to learn that magic is crumbling under the weight of science and logic. Wait, what? The film makes it very clear that magic and science exist in a symbiotic relationship, however people’s continued embrace of the rational begins destroying the old irrational magic and killing fairies. Alright Smokey, tell me more. Carolinus calls a special wizard council with his brothers Solarius the blue, Lo Tae Zhao the gold, and Ommadon the fucking evil red. The film is also very clear that despite Ommadon being an evil asshole, all magical matter must go through the four brothers. Good thing that this is cleared up because I was wondering why in the hell you keep inviting Ommadon places. The dick wizard, surprisingly, rejects the other brothers’ plans to create a haven of magic and instead tries to corrupt the world with evil. Ommadon’s plan can only be thwarted if his red crown is captured by a magical champion thus making the plot for this film akin to a game created by 4 year olds.

Just looking back at my summary makes me want to catch my breath. The Flight of Dragons, while intended for children and stoned adolescents, has a surprisingly dense and convoluted plot line. Add in the fact that the magical champion turns out to be a 1980’s tabletop creator of a game that shares the same characters, and one has a film that looks like it was never redrafted or condensed for clarity. Slow breathes and everything will be fine. Peter Dickenson, our unlikely hero and also author of a book with the same name, is whisked away to a realm of magic where he gets to meet his creations as well as being accidentally turned into Carolinus’s dragon Gorbash. Well, I guess it wouldn’t be an animated film without a talking beast. Between Empire Strikes Back and Return of the Jedi, James Earl Jones would not only voice Ommadon but also play in Conan the Barbarian in the same year. Winner of all the awards.

I wish I could pace the Flight of Dragons for clarity as the film awkwardly wanders around in circles before calling start and stop to the narrative. The film desperately tries to tie in fantasy with magic but ends up as a diatribe retold to you by the hippie at the party that just cornered you in the kitchen. While intended to be fun and educational, the Flight of Dragons ends up being a gross commercial for periphery products and a test for the threshold of utter stupidity. I am going to spoil things for you and skip ahead to where Peter the talking Dragon, another dragon named Smrgol, a knight named Sir Orrin Neville-Smythe, a talking wolf named Aargh, a woodland elf named Giles, and an archer named Danielle of the Woodlands all somehow reach the final battle. Trust me on this one, you didn’t miss any pertinent information. In fact, the 45 minutes right in the center of this movie is a good chance to eat dinner, take a nap, or watch a quarter of Krull.

I understand what this movie was trying to accomplish. It was attempting to inspire children to find the center balance between fact and imagination. It was also trying to shoehorn the world of fantasy into inspiration for the world of science. In other words, trying desperately to somehow equate these two to rationalize all those failed grades in math. Listen man, it’s like my fantasy drawings and your AP Chemistry final are like the same thing, you know? The Flight of Dragons sees Peter the scientist defeating Ommadon by reciting scientific equations and theories as if that was the only way this movie could have resolved. Sure, why not, oh no, please continue with how dragons float on hydrogen? Some people may criticize my own analysis of a children’s movie but the Flight of Dragons turns out to be such a challenge to stay awake for I hardly see another way. If one is looking for a movie with the logic of an 4 year old, step right up. If one is looking for a vintage animated fantasy film that stands the test of time, better look somewhere else.

Note: This certainly was not the original trailer as it is done in a modern style, but it is 100 times more exciting than watching the actual film.