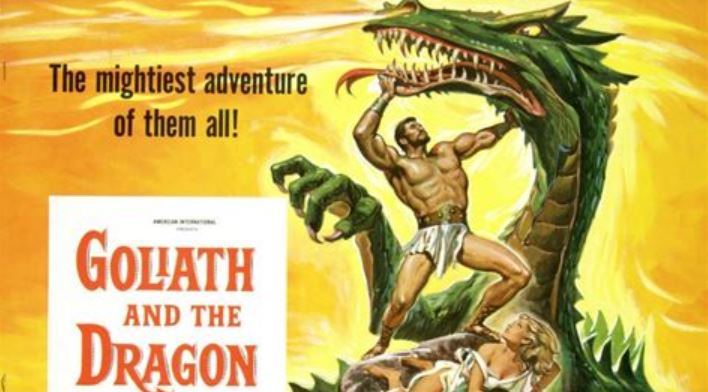 By the time this movie came out, the Italian sword and sandal craze was already off and swinging, with multiple series running concurrently. Steve Reeves who played Hercules in our first two films, continued his career in a bevy of non-herculean Peplum films. One of these films was 1959’s Goliath and the Barbarians, which was released the same year as Hercules Unchained. Goliath and the Barbarians continued the success of Italian films distributed in the US. This is important, because when redistributing 1960’s Revenge of Hercules, the film was rebranded as Goliath and the Dragon to tie into the previous success of Goliath and the Barbarians. For this reason producers edited, changed, amended, and sliced Revenge of Hercules to fit whatever film they wanted for American audiences. This “whatever, it’s all the same” attitude has lead to one of the most confusing films in my recent memory. Seriously, what in the shit is going on?

For the purposes of this film, I will be referring to the main character as both Hercules and Goliath aka “Herculiath.” Since the characters seem to be interchangeable, we might as well make up a name and see if it’s funny. The start of the film sees our hero, Herculiath, descending into the underworld and fitting what looks like a funhouse puppet together to get the Blood Diamond of the God of Vengeance. This is loosely based on one of the Labors of Hercules, but please do not get too attached to any sort of mythology as the film is going to make shit up as it goes along. After Herculiath gets out of the underworld, plans are set in motion to have a complicated political drama begin. If anyone was hoping for unnecessary feats of strength and wrestling with imaginary animals, you might as well just wait for the end.

It is important to note the translation, or maybe I should say the complete fucking absence of a logical one. The world of dubbing, or Automated Dialogue Replacement, is an intense realm of context, craft, and preservation, which can range from the delicate to the downright silly. Goliath and the Dragon has already shown itself as not really giving a shit so its dubbing is abysmal, nearing on the insane. It is apparent throughout the film, from the delivery of all its principal characters, the english translation aims to make use of 75% of what was said, or just enough so that it looks a little bit natural coming from the actors’ mouth. The result is a stunted and emotionless film that has dialogue that sounds like a project for a middle school social studies class. This translation error is a common mistake in films, but combined with the careless nature of the production, adds an extra layer of retched icing on this already horrid cake.

Most of Goliath and the Dragon has nothing to do with a dragon, or even Herculiath, rather King Eurystheus who is the equivalent of the jerky sadist that everyone wants to see die a painful death. Herculiath’s brother Illus (son in the original film) is in love with Thea, who is the daughter of a family that Herculiath has contentions with. It is noted that Herculiath believes this family had something to do with his own family’s death but I am yet unsure if this story is following the original mythology, since Hercules murdered his own family. We’ll say it’s both, to make it some neo-noir psychological thriller. Eurystheus convinces Illus that Thea is in love with Herculiath, which is actually ultra weird if it is his father instead of brother, but this leads Illus to try and murder Herculiath. This would go through if not for the intervention of convenient gods, but this whole plan leads to Illus, Thea, and Herculiath’s wife, Dejanira all being captured in the evil clutches of Eurystheus. There is a dragon in here right? 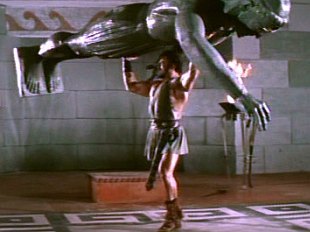 I would be lying if I said the middle part of Goliath and the Dragon was completely boring. Though the action is non existent and the acting is abysmal, the film follows such an absurdly pulp course, it is hard not to at least laugh before falling asleep. Additionally, the score, similar to previous American Peplum films, was provided by the very prolific Les Baxter — a man who I have come to very much admire for his work in the exoctica musical genre. The main draw for this film seems to be the complete clusterfuck of special effects, which is a melange of puppetry, animation, and ill conceived direction. An example of this would be the horrifying creature that is suppose to be a centaur, which looks more like animated roadkill than something majestic and from mythology.

So to catch you up, and possibly end, Illus tried to poison Herculiath for stealing his woman but that failed. This eventually leads to him going on a suicide ride to atone for his deeds. Herculiath goes after him while his wife gets kidnapped by the holy-fuck-you’re-ugly centaur. At the same time, Alcinoe, a slave girl who helped in trying to poison Herculiath, is being lowered into the infamous pit of snakes unless Thea married Eurystheus. Thea finally agrees, lest someone she hardly knew gets eaten by hangry snakes. Herculiath travels to the temple of the God of Vengeance, smashes the original blood diamond and then fucks up some falling statues. At this point, Herculiath is getting pissed. After learning his wife is going to be sacrificed to a dragon, Herculiath runs back and fucks up a puppet dragon. If you are thinking all of this is happening too fast, this is about the pace of the film. After fucking up the dragon, Herculiath goes underneath Eurystheus’s city and fucks up the natural structure causing the whole city to collapse. Eurystheus threatens Herculiath’s wife with death by snakes, but is then tackled by Alcinoe who ends up saving the day. Hooray. I am so confused.

Goliath and the Dragon is revered by the cult community, or at least people familiar enough with the genre. This reverence comes not from quality, but absurdity, specifically through the monsters that inhabit the small corners of the film. Mark Forest, our dashing lead actor, is a great Hercules who has the ability to smash his own house in the middle of the film for little reason other than being hangry. Goliath and the Dragon was a film that continued an ongoing trial of Peplum oddities to the United States market. I am wary of future films, including the infamous alien battle, but I wouldn’t want this any other way.

Tags: GOLIATH AND THE DRAGON, Kaptain Carbon, Sword and Sandal
Categorised in: Film