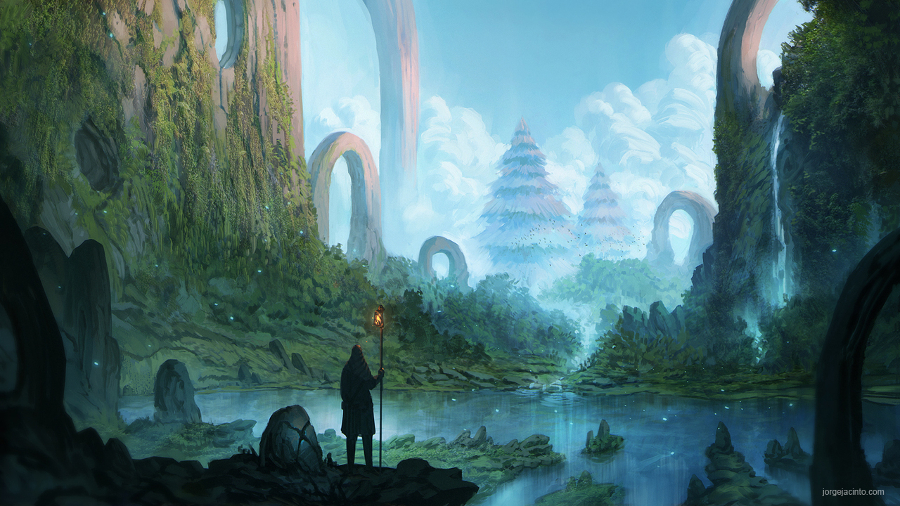 Watchtower is a monthly digest dedicated to seeking out interesting and new releases that encompass the sphere of heavy, speed, doom, and power metal. There is less restrictions to what is put in this digest with the only scope being of interest to people already on board with the rest of this site’s content. I am not going to say that one with an interest in fantasy comics, fantastic movies, and certain video games will enjoy everything in this digest but it maybe a safe bet. Artwork for this month’s Watchtower comes from Jorge Jacinto whose work can be seen here.

Let us try to not get too concerned with release date as this is from 2014. It is okay since metal has a timeless quality that makes any traditional doom sound with the tolling of a bell lovable despite the release date. Dawnrider is a Portuguese doom act which unfortunately has not had a record since 2014 – which happens to be this release. Caverna Abismal Records originally released this on cassette which is where the stream comes from but actual physical copies of this tape are long sold out. What is left is a sound which is as massive as what The Sword used to sound like. Whether or not you enjoy heavy doom or just like finding things which seem to be frozen in time, Dawnrider might be the perfect melee weapon for battle.

Holy shit a local doom metal act. I do not dig doom a whole lot but Alms takes its cue from late 70’s heavy metal which is thick with attitude and even denser reverb. Act One sound like a smokey amp that is hot with use with a sound that is narcotic with swagger. It is just amazing that I haven’t seen these guys around since they sound like a heavy Uriah Heep and that is everything I love.

There are a few bands named Attila and depending on who you are they are either kinda bad or really fucking terrible. This Attila is neither one you are thinking of. I promise. This Attila is the NYC heavy metal band that has a the blood of USPM which courses through their veins and sounds like the color of a faded wolf tattoo. Heaven and Hell Records, based out of North Carolina, seems intent on resurrecting forgotten heavy metal bands and giving them another chance at fame. This fame is marginally wider than their original release but those people who are into this stuff will stand by it with patriotic fervor. I mean, it is hard not to get behind this sound as it makes me want to go out and join whatever army, union, or gang they are supporting.

Is it 1985? Are you sitting in a rad car peeling out of a shopping mall with music blaring out of the tape deck? Why not? Manacle sure doesn’t care as this unsigned Canadian heavy metal band is here for one reason and it deals less with calendar dates and more eternal partying. No Fear to Persevere is the bands debut after a few beers of what I assume is endless beer drinking. I know little about the actual band and more about their general thesis and I appreciate everything I understand.

A Sound of Thunder is another local area band which I have seen, I believe, a couple of times at various shows and festivals. It was Metal is the band’s 6th record in a long career of big sounding heavy metal that is charming from a local act. Also be sure to check out there cover album which includes decent covers of Sabbath, Maiden, Deep Purple, and Dio songs. All together, A Sound of Thunder does not challenge any conventions rather just wants to party with their friends alone and of course you are invited.