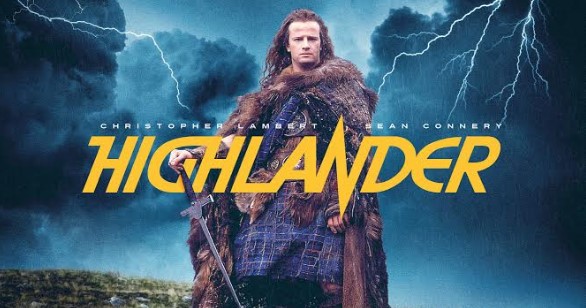 “There can be only one!”

“Stop saying that, it’s not funny.”

This is what my wife told me as we started to watch the 1986 sword and something fantasy Highlander. Highlander came at the time when fantasy films had a large market and people brandishing swords at each other was generally considered family entertainment. The film now has retained near cult status with even its tag line “There Can Be Only One” becoming absorbed in the cultural lexicon. It wasn’t until watching the film again that one realizes how odd the formula really is. Despite some glaring flaws, and we will get to them later, Highlander remains one of the better fantasy films of the 1980’s. All of what I just said is true even though it takes place nowhere near a conventional fantasy setting. I hope everyone is ready for Queen.

Highlander was written by Gregory Widen. Widen is known for writing and directing the film The Prophecy with Christoper Walken and the Prophecy II, which no one but like 17 people rented when it came out. Widen also wrote for a short lived TV series called Space Rangers. I am illuminating Widen’s resume because Highlander, despite some odd traits, is a decent and well rounded story. In fact, the film is so solid that it allowed itself to become a film with two sequels and a television series. Highlander possesses qualities indicative of memorable storytelling including unique settings and memorable characters. The unique settings are oscillating vignettes between the Scottish clan wars of the 14th century and 1980’s New York City and the memorable characters are the giant villain dressed in goth makeup. Connor MacLeod is a sad sack who gets killed in his first ever battle. He is bested by Kurgan, a bad ass immortal villain in a skull helmet. I do not even think MacLeod swung a sword at anyone before crumpling like a lawn weed. MacLeod sort of dies but then revives, leading his demonic ass to be chased out of his village by everyone he thought was family. MacLeod soon learns of his power as well as his true family, which includes a pantheon of immortal warriors fighting each other throughout time. He is mentored by an Egyptian Spaniard played by Sean Connery who looks neither Egyptian nor Spanish. Through illogical sword training on top of steep cliffs, MacLeod and the Spaniard train for the gathering, which is a royal rumble of immortals. We learn all of this through long flashbacks that MacLeod, a nosy reporter, and turbo goth Victor Kruger aka skull helmet sort of dance between.

You know what, it is a good time to mention most things in Highlander are ineffective in terms of traditional film making. Connor MacLeod, played by Christopher Lambert, is an unconvincing protagonist whose attempt to awkwardly mask his already invented Scottish accent comes off as well, awkward. The whole time MacLeod either pouts like a spoiled child in a rain jacket or speaks as if a dinner plate was jammed in his esophagus. Lambert is flanked by Clancy Brown who overacts Krugan, aka Skull Helmet, and Roxanne Hart plays Brenda Wyatt, whose name could only exist in the 1980’s. Highlander, as a film, is patchy and confusing at times often getting bored with its own plots and inserting flashback sequences where none are needed. The whole thing is sort of hokey and if it were not for it being fucking awesome I think we would have a problem. You know what, I can take mystical duels between immortals but I refuse to believe Sean Connery is Egyptian.

MacLeod sort of hovers around New York city where this immortal gathering is suppose to take place. I think there were only four immortals left because besides Kurgan, MacLeod, and the dude whose head got chopped off at the beginning, all there is left is Sunda Kastagir who was played by the same guy who played Captain Panaka in Star Wars Episode 1. Kastagir gets his head chopped off by Kurgan in an alley but if you were wondering how that happened do not worry as it happened some point while we were going through another flashback and doesn’t really matter. Oh, there was also a needless survival character who was witness to the whole thing but you really did not need to know that. Brenda Wyatt, MacLeod’s awkward love interest, gets kidnapped by Kurgan and then taken on a nightmarishly long car ride scene filled with Oliver Stone style camera work and Rob Zombie style screaming. I am going to ruin everything and say that MacLeod escapes by the skin on his neck and defeats Kurgan and absorbs his power and as a consolation prize becomes not immortal and is able to have kids. The End. Wait. No it is not. Oh did I mention MacLeod’s secretary is a girl he saved from the Nazis? No. Nevermind.

One of the most charming aspects about Highlander is its place among two different worlds, one of the films and the other of the television show. The television show is set in a world where, nope, no he doesn’t win immortality and also there are more immortals. Surprise, time for more story. Take this and go back to the movie sequel and aliens start entering into the equation. Also, remember that Lambert starred in the television pilot to hand off the sword torch to Adrian Paul. Add to this the soundtrack of Queen and a Wikipedia page that was obviously written by a knowledgeable and passionate fan and one has charm. The sheer lunacy of everything combined with the lunacy of the original movie is enough for everything to be negated and somehow Highlander turns out to be one of the coolest films ever made. Why? Do not ask. Just keep saying the tagline in jest while at parties. Keep watching all six seasons of the television show. Keep on believing that this thing will never get old and it shall live forever more.