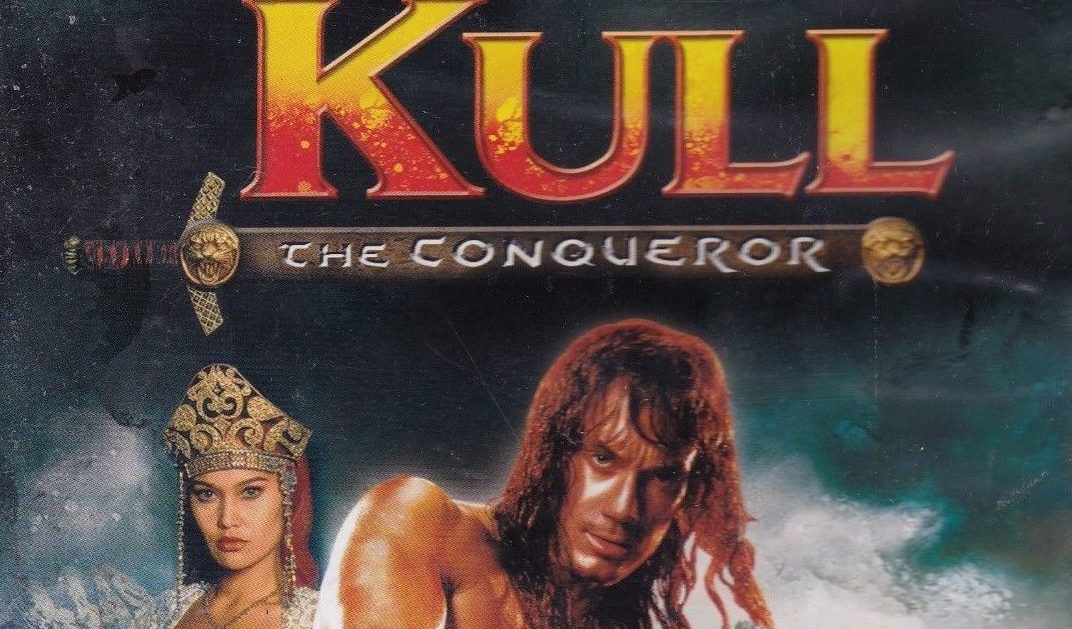 Oh gods. It’s Kull. What, was Arnold Schwarzenegger not available to do a third movie? Ha. Ha. Oh, that is actually the reason for this movie? I’m sorry.

As already discussed with other films, the 90’s hit a fantasy rough patch akin to a dusty stone stretch where the proverbial bike rider keeps skinning his goddamn knees for ten years. Looking back at the cache of films only reveals baleful failures, embarrassments, and good intentions. Kull does not start out with much promise. In fact, the film has a mountain of odds staring down at it. Just reading the premise and looking at the poster, it would be easy to affix to it a low number, kick it in the groin, and leave. However, there may be something more to this.

Kull is an interesting character and he can be thought of as the father of Conan. Well, let’s say the first draft of Conan. Shortly before Conan the Barbarian would enter into cultural consciousness, Kull of Atlantis was created as the dashing, introspective barbarian-pirate-gladiator whose lack of social graces made him seem uncivilized to others. This dynamic between perspective and expectation was flattened in the creation of Conan, who was just a barbarian that hit stuff and wandered. Continuity and character wise, Conan was more transportable from story to story where as Kull was dependent on his surroundings. Looking back at the history one can see why Conan rose to be quarterback while Kull sat on the bench drinking Gatorade.

Kull, the movie, was originally intended to be Conan the Conqueror, the third film following Conan the Destroyer in 1984. The film was supposed to be released in 1987 but Schwarzenegger’s role in Predator, plus a laundry list of other things, caused the project to dissolve. 10 years later, the script was unearthed, rewritten, and attached to Kevin Sorbo. Holy shit, this does not sound good at all. Add to the fact that Kull was released in probably one of the most hostile times for fantasy media. Nothing looks like it is in favor of this film. Why am I enjoying this so much? I know Gary Paul Davis AKA Litefoot has done more than this movie and Mortal Kombat Annihilation. It’s not like this Native American rapper is only Nightwolf and Ascalante to me.

Kull starts out pretty pulpy, as our main character is just a roving marauder that just so happens to slay a king. The beginning of the story is taken right from the actual Kull story “The Shadow Kingdom (1929)” before it reverts to the Conan story “The Hour of the Dragon (1935).” Actual formations of plot do not really matter as we are forced to recognize that Kull has no fucking idea how to rule a kingdom. In fact, a potted plant could probably rule better. This fish out of water trope is actually semi-entertaining as Kull’s good-hearted nature in trying to free slaves and institute religious freedom is met with resistance by nearly everyone who conspires against the king. These group of conspirators include the general who sought the crown for himself, the sniveling cousin who was next in line, and a resurrected demon sorceress. Why the hell not?

Akivasha is played by Tia Carrere, who is portraying Xaltotun from the original story. I guess dude wizards can’t seduce Kull like Tia Carrere or marry him for that matter. Remember, this is the 90’s. Things go great until Kull finds himself kidnapped while the entire kingdom believe he is dead and the one woman he truly loves is tried for his death. Oh wait. I forgot about this forced romantic interest. Yeah, so Zareta is a fortune teller who is sister to the guy who played Nightwolf in the Mortal Kombat movie, and she somehow plays a pivotal role in this film. What is it? I do not know. Perhaps it is to carry around cards and look gravely at them. Seriously, how many different cards is she going to pull out of that 7 card pile? Regardless, Kull saves Zareta from being burned and proceeds to hack and slash his way through legions of his own soldiers. Oh Jesus Kull, you can’t just do that. This is not how kings rule.

You see this is the part where things get a little hazy. Even internet plot details sort of glaze over the fact that the middle part of the story has the team of Kull, Zareta, and brother Nightwolf traveling to some foreign land to get the breathe of the god Volka, which will help fight the evil sorceress. These adventures lead them into the likes of wrestlers, actual martial artists, and the distinct voice of Harvey Fierstein playing a double crossing pirate. Oh, did I mention half of this story’s character development takes place before the film so any established connections have already been set up? Yes? No? Just close your eyes take a deep breathe and assume that everything will work out in the end. Sometimes Kull fights wind machines. Come on. Conan would have done the same.

I am not going to ruin the story for you but the evil sorceress is eventually defeated by the breathe of Volka that was acquired when Zareta showed her breasts to an ice statue. Listen, it makes sense if you watch it. It also should be mentioned that throughout all of the action sequences a distinct soundtrack of chunky heavy metal can be heard. Add to this the film’s tagline of “Kull Rocks” and one has a movie not aimed at intellectual aficionados of fantasy films but hardcore bodybuilders raging off of testosterone. It would be easy to give this film a 1 and move on. But I can’t. I couldn’t even stop watching.

Kull succeeds because it was destined to fail. The film’s director, John Nicholella, even died one year after Kull’s box office release. The cast is a mishmash of once A list celebrities, obvious favors being called in, and the denizens of TV movies and bit parts. I want to despise this film but I can not. It’s general charm outshines everything and even the comedic parts implanted in the story come with minor chuckles. It is still a dreadfully awful movie but one of the ones that is never boring. Kevin Sorbo is a decent actor with the skills to play a semi reasonable pirate. Sure Kull couldn’t beat Conan in a fight, but he would use his cunning prowess to find a way out of danger. Not only do I enjoy Kull the movie, but I also enjoy the concept behind him because, along with Solomon Kane, it remains one of Robert E. Howard’s lesser known protagonists. No, Kull will never be in the top tier of fantasy films but shit, looking at what we already have, I would say he is doing better than most. Oh, also, enjoy the summary of the entire movie, plot development after plot development, in the trailer below. KULLLLLLLLLLLLL!