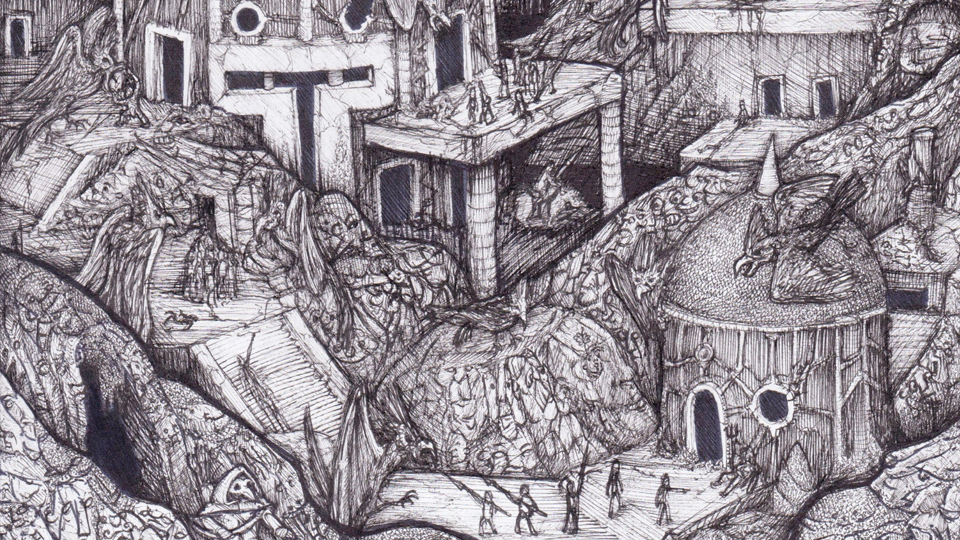 This is not only the 9th volume in the dungeon synth compilation but the third chapter in an ongoing musical narrative. Back in the early part of 2017, an idea for a dungeon synth compilation was raised both on the Facebook page as well as the dungeon synth forum. Not to have conflicting or competing compilations that could possibly be confusing for some, the two were consolidated, planned, and released together. At this moment, there are three volumes released seasonally with one being traditional, one being experimental, and finally one being the narrative volume. The narrative volume is fascinating to watch and to help plan and hopefully will be some obscure achievement long after all of us are gone.

Dungeon synth isn’t shy about its love for stories. Just at this moment there is a Halloween tape floating around regarding a story about a Pumpkin Witch. If left to its own devices, dungeon synth makes stories and crafts worlds. It is only natual that not only would there be a compilation, but comprised entirely of new material focused on a singular story. Keepers of the Shadow Realm was an idea for a handful of forum members to create songs based on characters. Each musician would then compose a song which frames the mood and aesthetic of his or her character. Artists like Chaucerian Myth, Erang, Einhorn, and Valscharuhn all gleefully took part in this inaugural experiment. Since then the compilation series has grown to feature different chapters in the saga of these keepers with the summer volume detailing the artifacts which they brought to their gathering and the eventual descent into the Shadow Realm.

The narrative compilations have always been more about the creators then anything else. This sometimes means that there will be widely different styles from traditional, to fringe, to noise. This is something which was endearing to me when arranging the selections as the transition from Nebulosa’s looming vision of dread to the relaxed bit atmosphere of Digre is something that may not appeal to everyone but for some it could mean all of the world. The combination of Alderen’s noisy horror with Snarling Clearing’s merry lunacy is only something that could have happened by chance and strokes of fate.

I am blessed to have had the opportunity to work on this project. As fall settles in and winter begins to loom around the corner, I realize that this project probably cant continue seasonally and the winter compilations will be the last ones released closing about a complete year of compilations. I want to thank everyone who participated, paid attention, and supported weird and interesting music.