MASTERS OF THE UNIVERSE 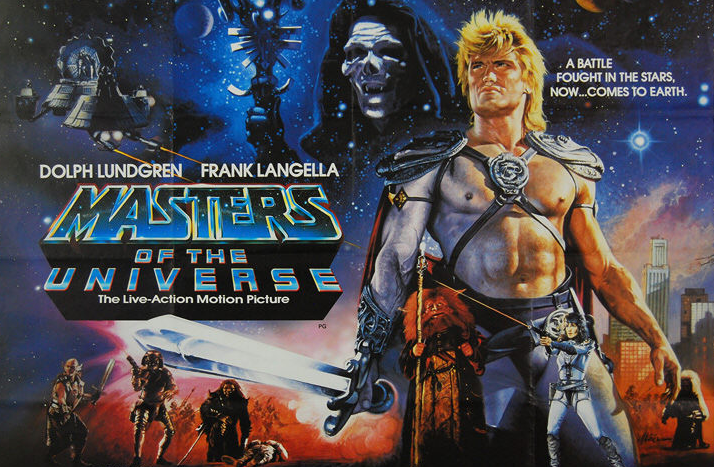 “Many viewers reviewed the motion picture in comparison to the cartoon, when it really was an adaptation of the toys only, which initially depicted He-Man as a barbarian in the first mini-comics (no Prince Adam or Orko).”

File the Wikipedia entry on the He Man franchise under “written passionately by a fan.” I must seek this author out and see his collection of Mattel action figures. Holy shit. We are really doing this aren’t we? We have reached Masters of the Universe, the live action adaptation of the cartoon…oh I’m sorry, the toy line which began in 1982. He Man has a unique history in that it seems to be directly influenced or ripped off from the Conan character, created by Robert E Howard in the 30’s and fleshed out in the 70’s by the paintings of Frank Frazetta. I am sure you can read the Wikipedia entry detailing the complex history of the toy line yourself. Or you can just assume it was a plastic muscle bound toy that had a tiger as a sidekick. Oh look at me, being all snobby about my fantasy media. Toys? Come on, grow up, and let’s get back to our tabletop game.

The live action film for He Man came a few years after the toy lines peak in popularity. The lengthy proceeding of film production combined with company executives’ lack of attention and piranha-like nature meant that the 1987 film was met with a fraction of the intended effect. The lead was given to Dolph Lungren, who was punch drunk off the success of Rocky IV, only to be supported by actors and actresses who either overact or look bored the entire time. Needless to say, everything went wrong. Even now the mention of the film causes chills among viewers and is used as a ghost story to haunt executives who try to make films out of toys. Or at least this is what I hope happens. Oh shit, I need to watch this movie don’t I? Skeletor: AKA melted face villain that looks nothing like skeleton.

Masters of the Universe begins as most normal fantasy movies. The forces of dark and light are entwined in a bitter battle that has been raging for what seems like an eternity. See? Normal. The evil faction is led by a skeleton overlord, aptly named Skeletor, who commands an army of mutant beasts and robotic storm troopers who want nothing more than to overtake castle Greyskull. However, they are constantly stopped by a wandering barbarian who is aided by a sorceress and band of futuristic mercenaries. See? Normal. You know what? I am not going to lay out the plot of Masters of the Universe as it could have been recorded from the mouth of a child playing with toy figures on the carpet of a living room. For now just assume that everything crazy happens exactly according to formula. Yes, I want all of the power. I will not kill you, you will be my slave for ever and ever. Rar. Raaaaaaaaaar. –woman’s voice– No, No, He Man Help Me!

It would be one thing if this shit show stayed entirely on an imaginary plane where comic relief could come in hairy dwarf size and science fiction could casually grope the fantasy genre. But no. The film makers contrive the plot to take place mostly in our world where the costumes and general existence of these fantasy characters are made an exponential eyesore*. In fact my eyes are bleeding. Gwildor, an obnoxious character created for the film, invents a cosmic key which accidentally transports our heroes to our boring normal world where a boring normal Courtney Cox and an even more boringly normal Lieutenant Tom Paris are about to have a boring normal teenage break up. I almost want to just watch this fragile romance without the addition of…oh well there it is He Man, Teela, and Man-at-Arms. Explosions. Lasers. Insanity. Oh, also add to this the backdrop of parental death via airplane crash and one is riding a rollercoaster they never have gotten in line for.

If this whole experience is feeling like a seizure, rest assured that Masters of The Universe is a colossal failure on many fronts. Artistically. Visually. Existentially. At no point in this movie do the actors, sets, or passage of time convince the viewer they are in a different world. This is one of the core tenets of fantasy but this point seems to be forgotten with the mad dash to capitalize on a toy line’s success*. This creates a cinematic vacuum where everyone involved (viewers, stars, and creators) feel like they would love to be doing anything else than this right now. This is of course not including Skeletor played by Frank Langella who sort of nailed the role of an evil magic wielding tyrant. I forget what this scene was about. Maybe some battle plan to take over the fried chicken restaurant…

We are also going to skip to the part where He Man is taken hostage by Skeletor because the evil overlord gave him a choice to save his friends or become a slave. He Man is then lashed to the very unnerving pleasure of Skeletor with a laser whip while his friends try to reach Eternia with a synthesizer. Trust me, it all makes sense when you force yourself to sit through everything. Alright, come on, we can do this. Skeletor becomes super evil by opening up the bay window in Greyskull and becoming something akin to a golden Aztec god that shoots lasers out of his eyes. He Man’s companions crash the party and overcome evil despite there being an entire army to stop them. Wait. No. Shut up. Evil is defeated. Yay. Yay. Alright, put away your toys. Time for dinner.

It is important to note that the history of He Man is told by the race to out do the success of a potential Star Wars toy line. Perhaps this is why I become high and mighty when it comes to toy lines, as their purpose and direction seemed like nothing more than cannon fodder for middle America. While consumerism cannot be divorced from many mediums of fantasy, the live action film of He Man shows the inanity of the He Man universe and just how goddamn stupider the whole series became when put to real life. This type of fantasy made children idiots and was about as healthy to development as soda, pop rocks, and big league chew. You see, there I go. The guy with the long box of comics making fun of the guy with the unopened action figures.

It is important to also note that the intended sequel for Masters of the Universe was abandoned and the costumes were re-used for the 1989 sci-fi action film Cyborg, which was directed by Albert Pyun, who directed the 1982 film Sword and the Sorcerer, which I already reviewed on this site. I either won all of the points or lost at everything. Maybe both?