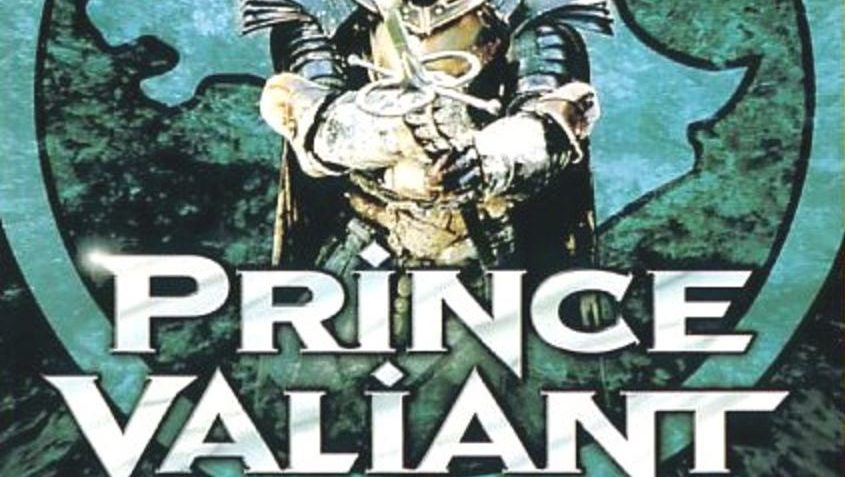 Oh no. It’s Prince Valiant. I guess the 90’s was scrambling for ideas after everything had been done in the 80’s.

For those of you who do not know, including me, Prince Valiant was not a part of the original Arthurian legend. In fact, Prince Valiant is sort of a made up character who lives during the later days of Camelot. For those of you who do not know, Prince Valiant began as a comic strip almost a century ago and is still running. Wait, is that right? Holy shit. What now Family Circus? Much could be said about the comic’s impact on not only English literature but also the artistic form of graphic narratives. While I will probably analyze the Prince Valiant format later for a comic review, it is now time to discuss the movie adaptation. Hold your breathe, it comes hither.

Before we begin, it is important to realize that this is not the first Prince Valiant adaptation. In the proto fantasy film days of 1954 there was a fantastic technicolor version starring James Mason and Janet Leigh. This is not that film. There was also a 1991 animated adaptation that followed more closely to the look and feel of the comic strip. This is not that version either. No, what we have to sift through here is the 1997 German/Irish version, which plods along at the pace of a slow and painful death. Oh, save me Prince Valiant. Alright, so one thing thing they did do correctly was not give Valiant that classic “kick my ass and take my money” haircut

I guess before he was a prince, Valiant was a lowly squire to Gawain. It is important to keep track of what is part of Arthurian legend and what is utter nonsense made up for the story. Gawain is registered, half of these other people are not. Valiant’s adventures take place, as mentioned before, in the later days of Camelot where Arthur is older and Merlin has died. This is actually somewhat factual as there are accounts of Merlin being tricked at the hands of Vivian but nothing concrete. Regardless, the story of Prince Valiant has Merlin’s corpse being unearth by vikings while Morgan Le Fay, Arthur’s sister, diabolically plots the demise of the natural world, or something of that nature.

Before I go too deeply into plot and character development, it is important to realize what this movie is really about. In essence, Prince Valiant, the movie, is a love story between our first billed hero and Princess Ilene, with a bunch of other shit getting in the way. Valient catches the interest of Ilene when he masquerades as his master Gawain in a joust at Arthur’s court. Gawain, injured, is unable to fulfill his knightly duties and because the story isn’t really grounded in logic, Valiant is chosen to escort Ilene to safety following the burglary of Excalibur by vikings. Alright, hold on. Let us back up. Morgan Le Fay needs to stop being so goddamn crazy. I know it is her thing but come the fuck on go outside once and awhile.

Morgan Le Fay, because she seems to fucking hate Arthur, has enlisted the help of viking raiders lead by Sligon the Usurper who pretty much has the best name ever. Sligon’s brother, Thagnar is sent with a bunch of the vikings to sneak into Camelot with the sole intention of stealing Excalibur, which is just left out leaning against Arthur’s throne. Sure Arthur, just leave that fucking anywhere like its a TV remote. The vikings make it seem like the Scots were behind the plot by leaving pieces of a tartan at the crime scene. Because Arthur is the biggest idiot in the damn world, he takes this piece of cloth as a clue and then wages war on the Scots. Outwitted by 9th century vikings. I guess you can’t expect someone with military experience and wits, able to rule and organize crusades, to be able to see through this deftly constructed rues orchestrated by barbarians in fur.

The above mentioned plot device sets the narrative in motion with Ilena slowly falling in love with Valiant because, well, you know what, I do not really know. We know they are in love because of some awfully painful scenes of middle school grouping while checking for broken legs. God, just do it and get it over with. Illena finds herself soon wrapped up in this whole world of danger when she is kidnapped by the vikings to be used as a bargaining chip because someone dropped Excalibur in the floor and they can’t get it out. Hold on. Back up. This whole thing is getting silly.

Much like Merlin, as previously reviewed, the introduction of the viking people is added into a story that already is sort of made up. Merlin had the Shakespearean character Queen Mab as the antagonist and Prince Valiant has the viking barbarians. After getting Excalibur, someone apparently tripped over a grape or something and dropped it into the floor. Excalibur sticks and then the vikings are shit out of luck. This prompts Le Fay and Sligon to kidnap someone of special interest to Arthur in order to get someone else to come who can get the damn thing out of the floor. Le Fay acts as sort of an influencer who is using the vikings as a tool to her own ends. This works out perfectly when Thagnar kills his own brother in a quest for power to be the one who controls Excalibur. It is out of the floor now, isn’t it?

On the other side we have Valiant and Ilene still blowing kissy faces at each other and still getting raided by barbarians and a master bandit played by Ron Perlman. Ilene is unable to think her way out of danger and she is whisked away to viking land with only Valiant and Illene’s fiance to help her. Uh oh. Well, this is awkward. Crises and danger are abound in the last third of Prince Valiant, as everyone is eventually defeated and Valiant begins his destiny of being a prince with his last name in the cultural consciousness.

Prince Valiant, the movie, has strong material as its basis. As already mentioned, the comic has won numerous awards in the past, which should make it an easy victory for filmmakers. But, just as you probably passed Prince Valiant or Mark Trail in the paper, the film adaptation is no more than a boring gallop through a well worn meadow. Not even the introduction of damn vikings could make Prince Valiant interesting. Though Katherine Heigl and Stephen Moyer would go on to make much better film and television, they are locked in a battle for which character we should care less about. Where Merlin, the TV show, had charm and believable characters, Prince Valiant has a sword stuck in the floor and a cast with as much convincing character as that of a beanbag pretending to be a sofa. This is pretty much all I remember of the movie aside from Ron Perlman, but hey, he has a memorable face. It is time to forget about Prince Valiant unless you’re talking about the 1954 version or the original comic strip. As always, enjoy the trailer for the movie, which tries to make fantasy as hip as smoking cigarettes after school.