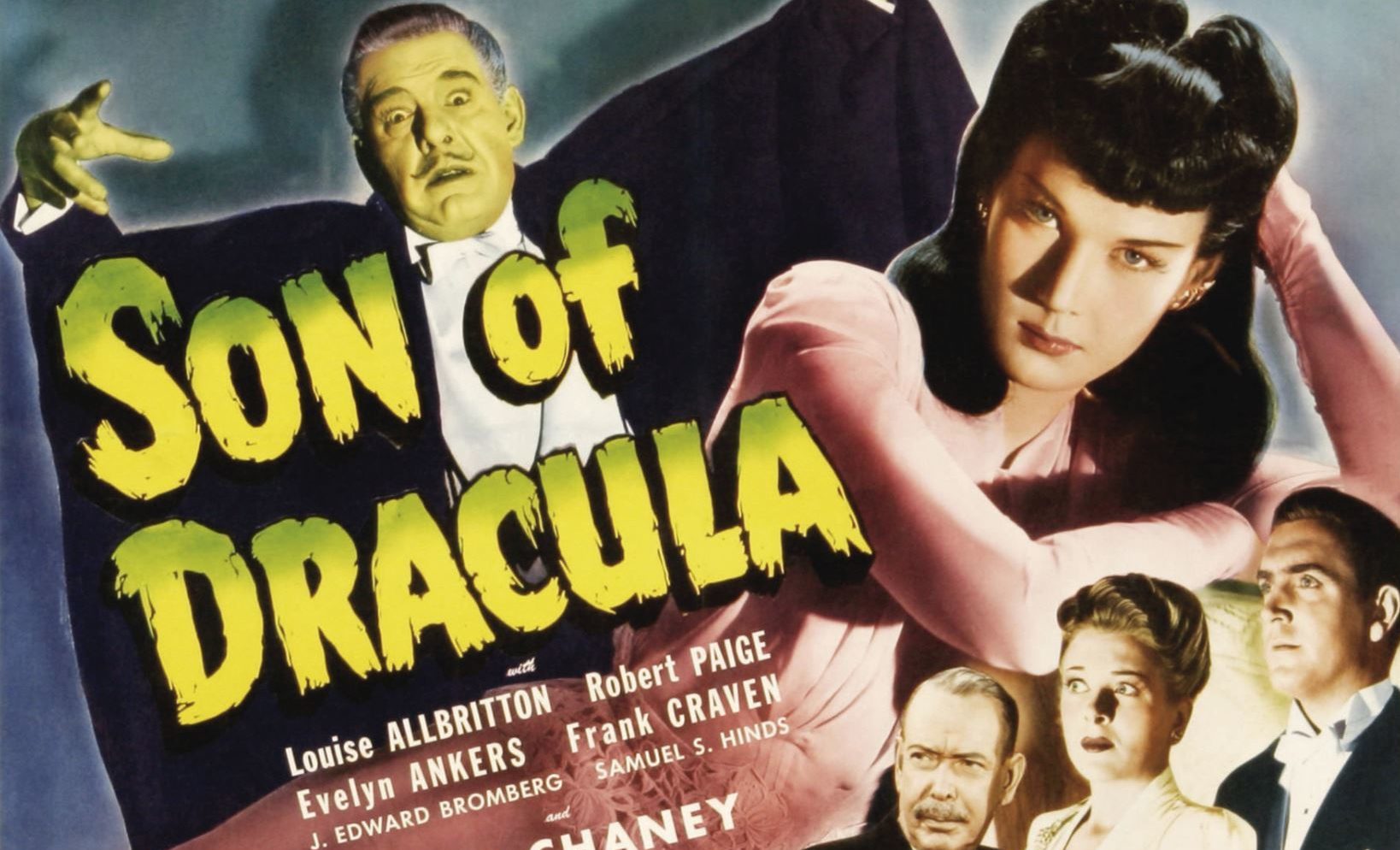 I feel that I could spend a year just watching old horror and still not get through the entire collection. Son of Dracula is the third installment in the eponymous series of Dracula-centric films. Before this was Dracula’s Daughter, an odd film that has since gained notoriety for its lesbian undertones. The original Dracula became famous for its lead star Bela Lugosi and his eventual casting in every horror film of the 40’s. Son of Dracula is interesting because it continues the work of Lon Chaney Jr., who was seen in The Wolfman, the Mummy series, and as some variation of Frankenstein’s monster. Chaney almost exclusively worked in horror and mystery films in the 40’s, so his casting as Count Alucard in Son of Dracula should not be surprising. What is surprising is how well Chaney portrays the Count, even when compared to the near untouchable legend.

Son of Dracula is memorable for a few things. First of all, the on screen transformation from bat to human to creepy mist was a big deal in terms of special effects. The film also continued some horror tropes, including warding by crucifix, stake through the heart as a finisher, and, of course, the ability to fool everyone by just taking a famous name and spelling it backwards. That is right, make no mistake, the name Dracula strikes terror in the hearts of mortal men but spell it backwards and people just find it a funny Hungarian name. For as goofy as this film is, Son of Dracula remains one of the more memorable films to make up the wobbly legacy of Count Dracula. Awww shit, son, did you just make Dracula appear out of smoke on screen? Nice.

The narrative in Son of Dracula is odd with large acts almost connected. The first act details two sisters, Katherine and Claire Caldwell. After the sister’s father, Colonel Caldwell dies of a mysterious heart attack, the plantation owners wealth is given to Claire with Katherine receiving a creepy estate called Dark Oak. Katherine has been secretly seeing a Hungarian count, Alucard, and is planning to marry him, much to the dismay of her boyfriend, Frank Stanley. Alucard, played by Chaney, is a dashing older gentlemen who has the ability to woo women and mysteriously change into flying animals and mist. If it is not entirely obvious, Alucard is the living son of Dracula. Alucard’s plan is to come to America and feast on a fresh population, as the blood in Europe has grown stale and stagnate.

For all intents and purposes, Alucard is the same Dracula, just with a different name. Chaney plays the character with the same type of gentlemanly demeanor seen in Lugosi’s portrayal. What is different about Son of Dracula is it’s setting in America during the 1940’s, with a bonus dimension seen in the characters of Katherine and Frank. Katherine is an odd character who seems to be created to echo the female seductress seen in Dracula’s Daughter. Her role throughout the film is a counterpoint to Alucard’s near silence and is the basis for keeping the narrative moving forward. She is not entirely good, nor evil, nor loyal, nor unloyal. She is a grey character that facilitates the rest of the story. Frank, on the other hand, is bold and brash, accidentally shooting Katherine when aiming for Alucard after their marriage. Frank goes almost insane as he flees to Dr. Harry Brewster. It is here where the first act concludes and the second one begins. Also, do not worry if you forgot about every trope regarding vampires because the ensuing dialogue between Professor Lazlo and Dr. Harry Brewester will tell you everything you need to know. Subtle but effective use of light and shadows make certain scenes suprisingly effective. Case in point: this gothic nightmare.

Son of Dracula moves into its second act with a near mind boggling amount of scenes full of exposition between the Hungarian Professor Lazlo and the hometown Dr. Brewester as they discuss matters related to Alucard. I say mind boggling because their conversations are constructed as to inform an audience that has never heard of Dracula, vampires, or anything that could hurt them. The second act moves slowly to the realization that Alucard is not a normal man, Katherine is not dead from a gunshot, and something needs to be sorted out between the doctors, the police, and the vampires. As Frank sits inside a jail cell, he is visited by the apparition of Katherine, who aids him in destroying Alucard. Again, Katherine proves to be interesting in her endless backstabbing.

Compared to other films of the same time, Son of Dracula is racked with action and an easy to follow plot. The end of the film sees Frank confronting Alucard in his creepy cave and somehow managing to set his grave on fire. No matter that this fire then sets Dark Oaks ablaze burning Katherine’s grave upstairs. Alucard, or Dracula spelled backwards, is vanquished. There is a tender moment at the end of the film in which Frank looks at the coffin of his once true love as it burns in the fires of his own doing. It is a strange end to a film where the villain is vanquished but the reasonable heroine perishes in a fire while her lover looks on.

I believe my adoration for Son of Dracula only comes in contrast to what the character would become in films like House of Dracula, House of Frankenstein, and the numerous lower quality films that would inhabit the later 40’s and 50’s. For a brief moment, Chaney’s Alucard mirrors Lugosi’s character as a calm and reflexive villain who has no sympathy for the human race but couldn’t be further from a traditional monster. Son of Dracula continues a strong three film series before the character would go off the deep end.