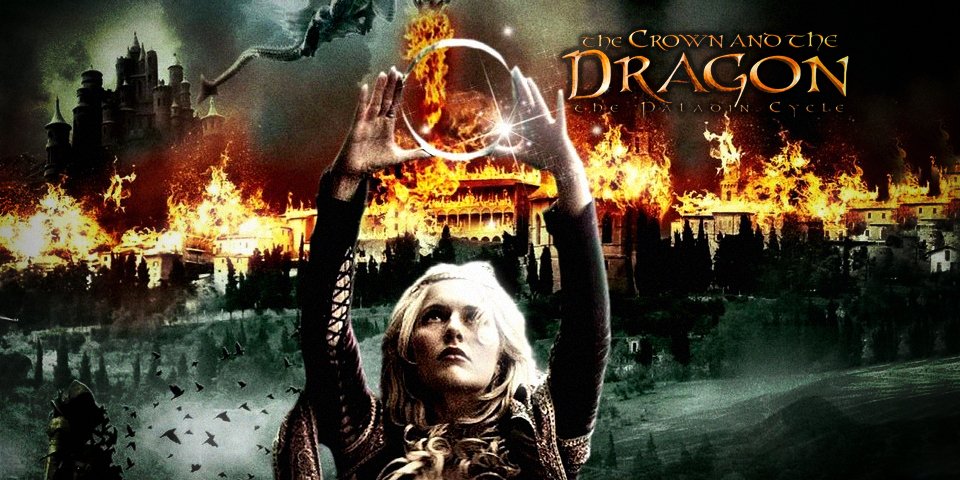 Jesus, I really do not want to be negative but these current fantasy films are sort of making me this way. I am always timid when it comes to criticizing music albums, but find myself more desensitized toward films. although just as much hard work goes into a film as an album, the blame for bad cinema can be spread over a larger party including director, writers, actors, editing, and just about everyone involved. This may be the case for The Crown and the Dragon. I will even track down the catering, that had it on set, and give them a piece of my mind.

The Crown and the Dragon is a 2013 fantasy film directed and written by Anne K. Black. If you do not know that name it is perfectly alright. Black had one writing credit in the 2003 film Pride and Prejudice before embarking on the weird and wild world of CGI-aided fantasy. In 2011, Black wrote and produced Paladin: Dawn of the Dragonslayer. The only reason I am referencing these past works is that The Crown and the Dragon seems to be loosely related to The Paladin Cycle, as a subtitle. Perhaps I am just going insane as the two films seem to have nothing to do with each other besides the fact the both casts number in the 10’s. I am sorry, 10-20. Under 30 for both. Our dashing…errr…leading. Our leading man.

Pay attention really closely as I relate the plot. If I am getting this right, Ellen Barethon ascends to her role as Paladin after a tumultuous series of events, including the death of her aunt and the meeting of a very un-charismatic leading man named Aedin. The two instantly become a power duo of repellent characters so unlikable to the audience, they only have each other. Ellen and Aiden spend the majority of screen time attempting to either find a mystic artifact or escape the other group of people also seeking said artifact. I still do not know what this artifact does. Maybe it calls the dragon that is chasing them. While this is happening, the two eventually fall in love with the grace of a semi truck rolling down a hill. Apart from spending the bulk of its time aping films like Lord of the Rings, Star Wars, Game of Thrones, The Princess Bride, and other more successful stories, minus any sort of creativity or tact, The Crown and the Dragon limps along as a fantasy story exhausted of resources. The need for a romance is so forced that eventual scenes of Aedin watching Ellen getting changed, which is supposed to further romantic interest, come off as weird, awkward and slightly creepy. This un-dynamic duo lead the charge into a clusterfuck Calvary of ineffective storylines.

Films tend to suffer when they disguise themselves as something they can never be. The Crown and the Dragon wants to be an epic film but it was crippled by financial limitations, and the fact that no one could do a convincing job with what they had. The 5 actors that were on screen at all times fail to connect and run through their dialogue like an 8th grade history project. In addition to the plot of Ellen getting her Paladinhood via natural magic (whatever), there is a political undertone that includes a rightful king being crowned, a sorcerer who can summon something that looks like a Nazgul but is made of crows, a unicorn horn, and also a dragon. Yes. Who could forget about the dragon that is sort of the wandering monster throughout the film, burning shit when things have gotten incredibly stale. To add to this confusion and calamity is the set designs that wane between authentic to obviously rented. Throughout the film, lush landscapes populate and give the viewer a sense of scope. Because there are 13 goddamn people on screen at most, this scope is exemplified and soon turns into emptiness. The castles in this film are authentic, but most of the films action takes place outside their walls and leads to something that looks more like play pretend in the backyard of a monastery. If it seems like I am focusing too much on the set design, it is because it is an aspect of this film that is suppose to be both enchanting and ancillary but looks dimwitted and slow. The Crown and the Dragon becomes so bad that interpretations of the film become somewhat plausible.

One of the more interesting parts of experiencing this film was looking at other’s reviews of The Crown and the Dragon, which point to the unicorn horn as a “MacGuffin.” A Macguffin is a quest for an objective that is made the engine for a plot. The actual object seems to be of little significance as the narration around the object. The meaning and explanation is secondary to the stories that are connected. I am thankful for the chance to ponder the use of this plot device in fantasy films, though I do not think this can explain away the insanity of this unicorn horn in this particular film. The Crown and the Dragon may use this mysterious object as a vehicle for stories but in the end, especially when someone gets stabbed with it, the whole production feels rushed and confused. I beleive the thing is called a Falerica. An example of the enormity of a usual set.

The Crown and the Dragon is a poorly made film that fails on almost every level. The most frustrating part about this film are the glimmers of quality that sometimes shine through dark clouds. These glimmers include the close cinematography segments between exterior shots of people running around in costumes. Other than these small bits of clarity, the rest of the film teeters between boredom and the abyss of insanity. I am sort of interested in seeing how the paladin cycle concludes, or is even connected to the other stories, but Black’s next film seems to be unrelated and includes Kevin Sorbo fighting a wild Ogre. The Crown and the Dragon poses more questions than it is ever willing to answer. If there is anyone to blame for this time wasted, it is myself.