The Hobbit – The Desolation of Smaug 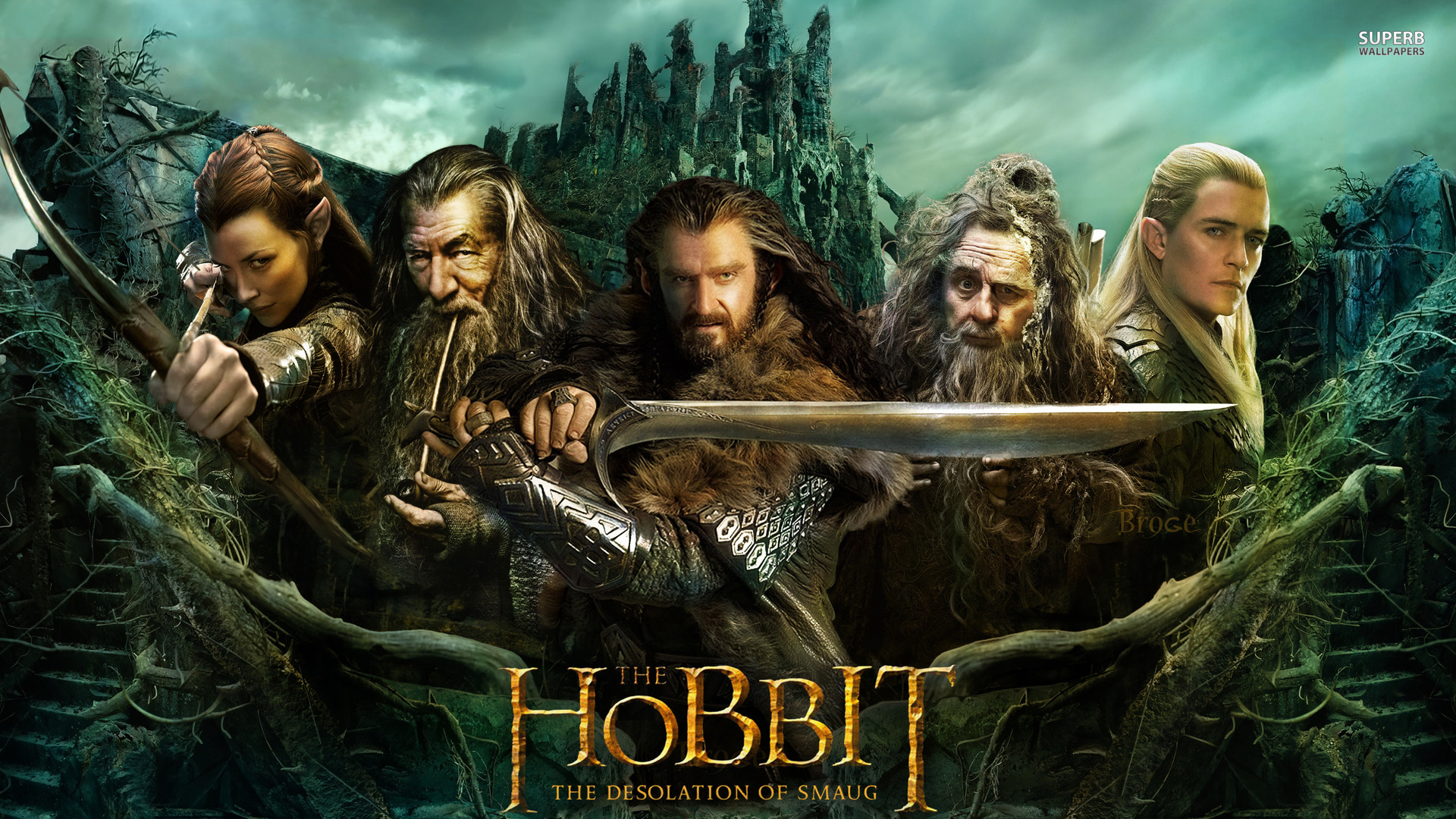 I am very defensive of the Hobbit films. In fact, I will probably spend this holiday season arguing with friends and loved ones about my affection for this epic rendition of a 1937 children’s book. This attitude is due, in part, because I found myself immensely enjoying Peter Jackson’s attempt to retell the classic fantasy story while watching so many glaring flaws. The Hobbit will always be a case with many holes and, unlike its predecessor, is going to be won with passion. My defense comes against a wave of criticism regarding high frame rates, needless additions, and a general unenthusiastic attitude for near 3 hour fantasy films. Well, they are all pretty much correct with the only thing missing being how enjoyable this trilogy has been so far.

The Desolation of Smaug, like the Two Towers in 2002, starts right where the first Hobbit movie ended. Well, this is sort of true as I thought Gandalf’s mystery Eagles carried them way far from danger not 20 feet down the danger mountain. Needless to say, the action starts right away as the company of dwarves, Gandalf, and Bilbo are looking for any way off of Orc Mountain. If one would like a backstory of whatever happened thus far please see my first review of An Unexpected Journey. The group of hero dwarves finds uneasy refuge with Beorn, a skinchanging half giant. Beorn is important not only as a deus ex machina for the immediate danger but as an interesting addition to Tolkien’s continuum. Beorn plays a large role in the Battle of the Five Armies, which most likely will be the end battle for the third movie. Beorn and his followers, the Beornings, are support characters leading up to the War of the Ring. All I am saying is that it isn’t just in here for nothing. Guess what, I am going to be really passive aggressive the entire time you are here.

The Desolation of Smaug is interesting because of its eventual split in stories. After receiving aid from Beorn, the company travels to the Elven pass through Mirkwood, AKA spidertown. Here Gandalf senses evil and like an old kook who forgot his wallet, leaves the company to go do something else. Um, I got to go guys. I got a thing. This is where the movie splits and becomes two films. One is the adaptation of the Hobbit and the other is the prequel to Lord of the Rings. While Gandalf leaving the party was detailed in the book, his future adventures and conclusions were constructed for this story. For a brief amount of time, we are given two stories that are free of the other. From exactly Mirkwood to Smaug’s treasure room the two films shine independently. Well, mostly. Let’s not talk about entirely fake characters.

The spiders of Mirkwood are horrifying but this is coming from someone who will leave the room if there is an insect on the wall. Bilbo further finds fascination with the ring but the whole temptation with it is needlessly highlighted. The dwarves are suddenly saved by Legolas and his merry band of spider slayers. Listen, it is entirely possible he was here around the area. I mean he’s like a hundred years old right? The dwarves are imprisoned in the Elven kingdom only to be offered alliance by the lawfully neutral Elven king Thranduil. Mr. Oakensheild, our protaganist, thumbs his nose at the offer and chooses to sit and wait for rescue from Bilbo. Oh, yes, we also have a needless love interest in Tauriel, a made up female elf, and Kili, one of the group’s less repugnant youth. I guess if she wasn’t in here it would just be a whole bunch of dudes in fantasy costumes running around waving swords. Sounds like every DnD campaign from the 80’s.

I feel that I am always defending the film’s elaborations against people who like to use them as criticism. I find this fitting as the last 10 years of fantasy and comic book films has valued faithfulness to source material to the point of absurdity. In the original book, the dwarves get into barrels and float downstream to Esgaroth AKA Lake Town where they meet Bard, a master bargemen. In the film, however, we are given one of the most ludicrous yet entertaining chase scenes that has an elf releasing arrows while standing on top of dwarves stuck in a barrel as they are all headed into churning rapids. I can’t even write that sentence without it seeming ridiculous. Again, if presented faithfully that scene would have not been as exciting as Orc heads flying at the audience. This addition also mirrors whatever is going on with Gandalf at the time, which includes some heavy handed sewing to the first film, the appearance of empty Nazgûl tombs, Radagast in need of a shower, and a square off with The Necromancer AKA Sauron AKA a level 20 incorporeal spirit with fly and a shit ton of special attacks. Again, to reiterate, when separated, these events are more digestible portions.

The group of dwarves are eventually snuck into Lake Town, which lies right outside the Lonely Mountain AKA Smaugtopia. The group meets Bard AKA Mr. Bowman, who will eventually rise to be the hero of the third movie, but I am not giving anything away. Lake Town is a desolate place that is run by a greedy and cowardly Master of Laketown portrayed in the film by Stephen Fry. The dynamics and character of Lake Town in the book, and the film, give the place a dimensional presence. It is a town which is suffering the ramifications of standard fantasy warfare. there are actual reasons why the town embraces Thorin and his merry band on their quest to reclaim their treasure. The undertones of corruption and hope run throughout the book and are presetned to effect in the film. Oh also, the barge constructs of the film allow the character and encroaching battles to be fought with extra added interest. Again, me always defending. Say what you want but two old wizards traveling into the depths of darkness and evil only to square off against the budding form of evil incarnate is pretty fucking awesome.

The last third of the movie sees the dwarves eventually reaching the Lonely Mountain and finding their way in despite Thorin giving up way too fucking easily. Its locked guys, fuck it, I am out. Bilbo, being the most sensible, finds the way in and makes his way down to perhaps the film’s greatest scene. The treasure room of Smaug is cavernous and the film does a fantastic job at depicting the enormity of the dwarves’ treasure. This is accomplished by spacing out the dimensions of the treasure room through later scenes. What first starts out as a ginger climb on a pile of gold leads to an almost avalanche of jewels while Bilbo is being chased by a level 10 Red Dragon. Smaug is voiced by Benedict Cumberbatch, who seems to nail his role even though he is only a voice. I think he could just read lines from Star Trek and still be convincing in this role. I am thankful for this one scene because from here on out it gets a little unnecessary.

What could have been 10 minutes was turned into 40. The dialogue between Smaug and Bilbo is a well written portrayal of logic and storytelling just through lines of text. This interaction not only furthers the story but rounds out Bilbo’s character as a critical thinker. What doesn’t do this is the eventual video game run through the Dwarven kingdom being chased by a dragon. When Smaug leaves the treasure room, we are treated to an unnecessary scene of the dwarves relighting the forges, via dragon fire, and forging a giant golden statue of unstable gold that coats, but does not kill, the dragon. This part is where I side with critics in saying that the whole thing I described was a little too fucking much. While I appreciate the need for cinematic ends, everyone in this theater is already coming back for the third so you can leave a little bit up to imagination.

The Hobbit could have been a two part film with the first ending at Mirkwood and the second at the battle of the Five Armies. The film could have been one really long three hour film with a couple of additions. There is no need for this to be three films but despite my opinion, I feel the film makers are doing the best they can. In my defense of the Hobbit, it is important to realize I do see the financial reasons for splitting as they did. Regardless, there is no universal disgust for the filmmaker’s soulless cash grabs, rather people upset it is deviating from a goddamn kid’s story. I remember I said in my first review that I did not find much difference between An Unexpccted Journey and the greater Lord of the Rings stories. I am amending this after the second film. The Hobbit will never be Lord of the Rings and no amount of additions or exclusion could make it the same film that was released 10 years ago. It is time to stop hoping for a recreation of one of the better fantasy films ever made. What the filmmakers have done, however, is given us a chance to experience another adaptation that is entirely different from the books but still entertaining as the original. As a movie, it shines. Please sit down in front. I am trying to watch this part.