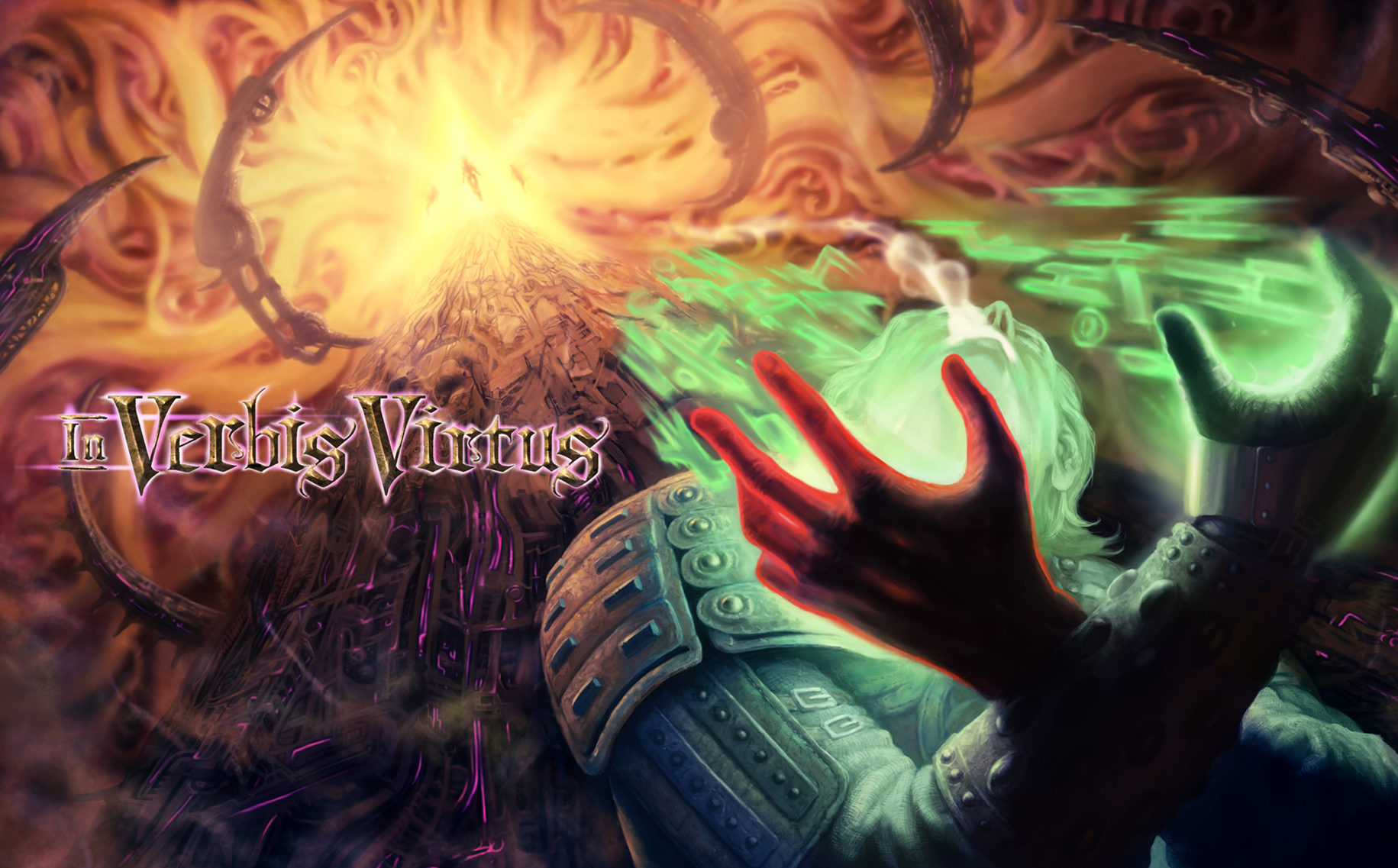 I tried to learn Latin once, for reasons I can’t remember but probably had something to do with being a tremendous nerd. I bring this up because, after having played this game for about two hours, I started having Rosetta Stone flashbacks. “In Verbis Virtus” doesn’t exactly try to discourage the association, what with naming itself in Latin and marketing itself as a “fantasy adventure” in which you cast spells using your “real voice”.

Not real magical spells, obviously. Think of this as being akin to Rocksmith, only using gameplay to train you in a skill that is impossible to actually use.

It’s a game with only one gimmick, the voice activated spell casting system, and to its credit I managed to cast with a reasonable degree of consistency. The voice recognition took a little practice, and for about half an hour after being given each spell I found myself pausing the game to remind myself of the word. Occasionally I’d have a problem activating them despite thinking I knew the word, and it’s a credit to the system that each time this happened it was me that was in the wrong. The awkward pronunciation doesn’t help, though perhaps that’s partially my fault as well. I grew up on a rural British farm, and as such spend most of the time sounding like I’m about to hawk up a live sheep. “OK greg, for the goddess I was thinking something like an alien skeleton?”
“sounds great”
“…with tits”

It’s primarily a puzzle game, which is exactly the right kind of game for a system like this. Yelling whatever fictional word the devs chose to mean “fireball” over and over again would get old fast, and require a kind of consistency that voice recognition can’t provide, especially under pressure. There’s no better place to learn this than in battle with the occasional enemies that get thrown at you, presumably to make sure you’re paying attention. It doesn’t help that they’re unsettling, chattering swarms of little bastards. The first time we met I forgot how to say anything but fuck, and, seconds later, they were feasting on my corpse. The next time we met I managed to eviscerate some in a beam of pure luminescence that I had to pause the game to figure out how to conjure.

Remembering bullshit words isn’t easy under duress, and while that might qualify as part of the challenge, it doesn’t make it any less frustrating.

This is a shame, because without the voice controls this would be a pretty unremarkable puzzle game about dicking about as a wizard, wandering through basements and solving puzzles that test your patience more than your intelligence. Admittedly using the telekinesis to throw pillars about is momentarily fun, but with a level of consistency that shouldn’t happen in nature I used the wrong commands for “come here” and “go there”, nearly battering myself do death with masonry more times than I care to admit. The fact that maps are strewn around the world rather than permanently a button press away would probably have added heavily to the sense of isolation and confusion if I hadn’t immediately screenshotted the first I came across.

This game seems like something of a lost opportunity. Considering the dev has proven they’re capable of providing a half decent voice-recognition system so long as nobody gets stressed or swears, maybe a language tutor would be more up their alley. Think something like Typing of the Dead, only instead of feverishly rattling a keyboard you’d yell the descriptions of your assailants in foreign languages.

It’s clear that this is intended to be a puzzle solving game with magic, and voice recognition just the means by which you activate the magics that solve the puzzles, though it plays more like a language tutor that uses nonsense words and forces you to complete nonsense puzzles to progress to a bigger vocabulary, and as such It feels like a waste of potential. Yelling silliness to myself might be tolerable if I could turn around and justify the embarrassment by saying I was learning a legitimate skill. Sadly “yelling silliness to myself to progress in a lacklustre fantasy puzzle game” doesn’t have quite the same ring to it.