XOTH – Invasion of the Tentacube 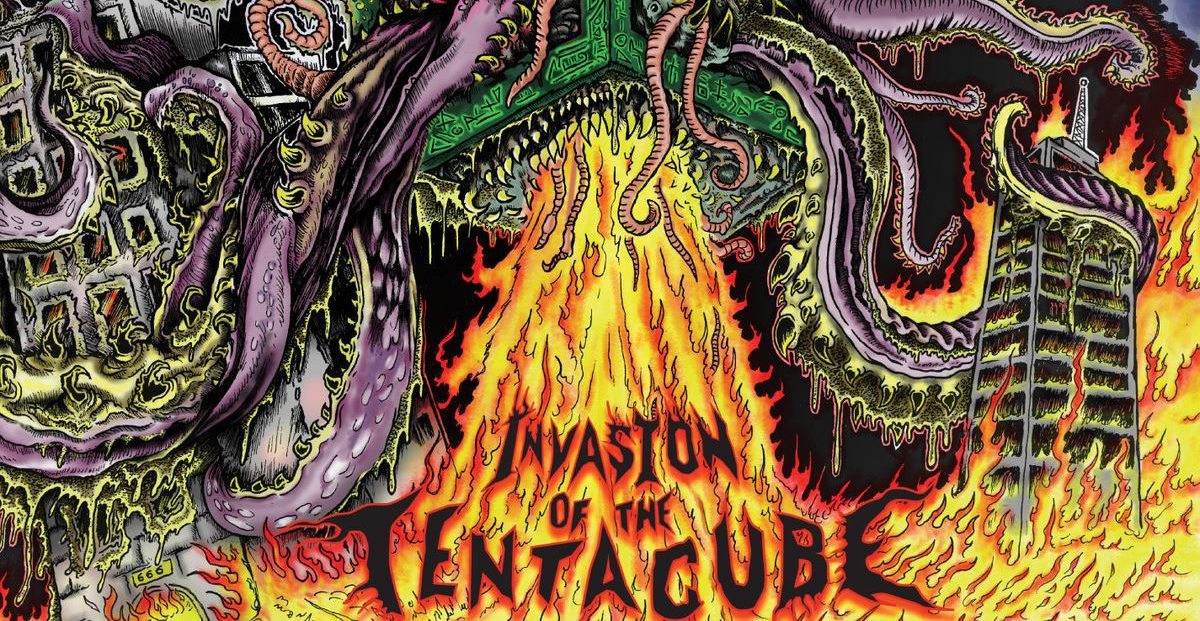 The release of a new single on bandcamp by Seattle’s XOTH portends to the forthcoming release of the band’s third full length album and that means one thing… We are ridiculously late in discussing their second one.

Their first album, Hostile Terraforming, was a gritty chunk of melodic death metal about the forceful transformation of the planet by malicious alien intelligences. The next was a similar rumination on the end of mankind only this one, Invasion of the Tentacube, is about a Tentacube. Invading.

You might expect this to mark a change of direction, tentacube’s being about as likely and intimidating a concept as the fabulously goofy Ziltoid the Omniscient. I was expecting something lighter, something a little less blood and thunder. Something goofy. Instead I was struck with the sudden intensity of an unexpected tentacube, dropping out of hyperspace to reach out with a tentacle the size of a tectonic plate to slap me wetly across the face.

This is melodic death, as serious as last time, but now with a nice line in playful over-expression. Xoth were never slouches lyrically, each track of Hostile Terraforming had something worth hearing in it’s grunting, gritt throated vocals, and invasion of the tentacube is no different. They seem to double down on that this time, and audio balancing means they hover forever at the edge of understanding. Usually close enough for understanding on your second or third listen, but at a first spin you’ll be too awed by the thrumming of the guitars, the relentless drumming and the hearty, ever energetic bass to pay the words much mind.

In fact, listening to the album twice, maybe three times in a row, is my prefered experience. First time you get the sonic impression, the instrumental parts, both weighted with death and destruction, and you’ll probably pick up a few lines from the fantastic “Terramorphosis” about tentaclaws. Picture this as day one of the tentacube invasion, hearing an apocalyptic crash as the atmosphere cracks open and a huge, distant shape emerges out of the void. There’s no mistaking the intention, but there’s still too much smoke to discern the details.

Listen two is the aftermath. It’s a fucking tentacube. Cheesy, perhaps, and wearing a Lovecraftian form with a B-movie attitude. There’s a playfulness to it, but it’s borne of confidence and power. The playfullness of a monster. It’s playing with it’s food.

The whole album supports that kind of power, traveling from the melodic death of it’s openers into almost the territory of a power ballad by track six, dropping vocals for minutes at a time to let it’s guitars sing.

And it never lets up. Ancient Sentient Ooze ends with a fast, punchy flourish whose lyrics almost defiantly include the line “shove it up your ass” and end with “go into the Ooze” I say almost, because I’ve no realistic way of knowing. There’s just too much, and there’s such a compelling beat to that it’s impossible to concentrate on any one aspect. This isn’t the only time this happens either, the instrumental work is so thoroughly solid and so captivating it’s sometimes hard to tune in to what’s actually being said.

This is one of only two problems I had with the album, the vocals you can hear are so consistently brilliant it makes you morn the ones that just don’t seem to make it out. Like an audio necronomicon, you’re mind just isn’t capable of digesting what’s happening. You definitely heart it, but for the sake of your sanity, you can’t comprehend.

The second is the total lack of any mention of a Blocktopus.