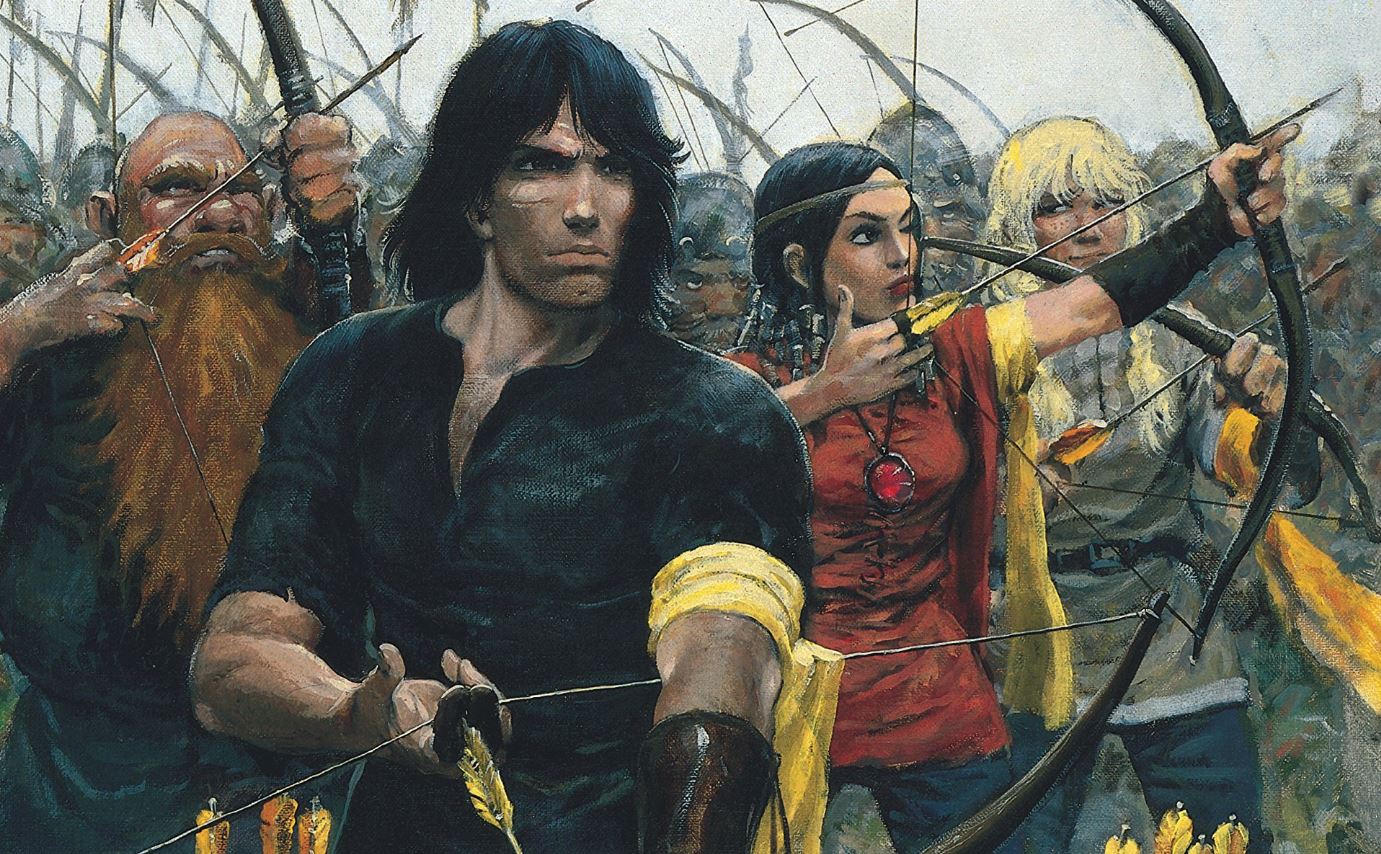 I know it is difficult to believe but the world outside of the United States has comics. Sometimes the most popular are ones you have never heard of. Enter Thorgal, a fantasy comic that has been dominating the French/Belgian market since its inception in 1977. As of now it is still being published, even eclipsing the success of post-Thorgal work by creator Jean Van Hamme. There is something about a space bound alien Viking outcast that captures the imagination of young ones. How any good story starts…with a baby in a space shuttle rescuing vikings. What?

Child of the Stars collects the introductions and early adventures of Thorgal, a mysterious child found by a gruff group of Vikings. Set in the golden era of Nordic naval adventures, Child of the Stars begins with a ship lost at sea. Leif Haraldson, leader of the crew, soon loses his men to superstition and mutiny at the hands of Gandalf the Mad. Tied to a mast and offered for sacrifice, Lief is saved only by a shining light that leads the ship to safety. The divine beacon turns out to be a metal cradle in which a baby sleeps. The child is named Thorgal Asierson after Thor and Asier and is raised as a Viking to little dispute except for Gandalf the asshole. I am sorry. I shouuld be fair to this character as he is perhaps the leading antagonist for Thorgal’s early advenuterers. Gandalf is not unreasonably evil, just obsessed with local power and thus, spiteful towards mysterious god children. Pretty straightforward, right?. Very soon within the first volume however, the storyline of Thorgal manages to set itself apart from other comics. Enter space. We soon learn Thorgal is from space and that the beacon was a spaceship or his craft entering the atmosphere. Thorgal is the son of Varth, a spacebound imperialist who wants to use future technology to tame the savage lands of Earth and enslave the primitive human race. Earth, as it appears, is in its second phase after an unspoken disaster caused the first dominate race to leave. Varth’s domination quest is opposed by his own father Xargos. Echoing popular Nordic tradition, Varth and Xargos have a duel to settle their dispute — this time in space. Much like the action scene in the beginning part of the story with Lief and Gandalf, two men settle their quarrels over fighting and Xargos is bested by Varth, leading to his banishment on the primitive Earth. Many years later, Thorgal meets the banished Xargos, who reveals this past and the fact he is his grandfather. All of this is, mind you, within the first 100 pages.

Thorgal’s unique story angle makes it endearing. Additionally, wrapped up within a dense narrative of science fantasy is an underlying current of even more complex Nordic mythology. Unlike current publications, which dilute the mythological aspects of Nordic culture, Thorgal’s story is driven by an engine of folktales. The second arc of Child of the Stars involves a dwarf king (who looks like a gnome) searching for metal that does not exist in order to regain his name, which was lost to the serpent king. The king eventually finds said metal in the disk worn by Thorgal that houses his digital memories. Sure, that works. Thorgal continues through an oscillating carousel if continuing story and crazy fucking folk epics. At times it is confusing but all the while it is something that is rarely broached let alone done so well. As I said before, the mythological aspects woven into the story is perhaps Throgal’s most endearing quality. Through the lens of oral tradition lives a story that is not only unique but reverent to a long aged tradition. Sure, the main plot of Child of the Stars deals with Thorgal being ostracized and even plotted against by Gandalf the dickhead and his son, which he eventually overcomes, but there are others. One of these other stories involves Nixies and Thorgal’s future wife going on an adventure with a blind god, who turns into both a Dragon and a Unicorn during the course of the story. During vignettes such as this, a folk narrative envelopes the story with not only dense detail but a dreamy haze. These small derivations only strengthen the character of Thorgal, the boy and also comic.

Child of the Stars is the first book in a continuing series of adventures. The establishment of Thorgal as a character eventually leads to a wider much more expansive universe of mortals, demigods, and immortal characters. Not only is Thorgal an excellent story but its use of full fledged mythology as a spine is not only challenging for the reader but also rewarding. You can read the adventures of Thorgal in the newly revised and chronological order or through original publications of Tintin which have a much more erratic publication history. Yes, I believe I found the comic that could hang in the Hollywood Metal offices. Maybe I’ll get the one with the blindfolded unicorn cover to sit above Brendan’s desk.