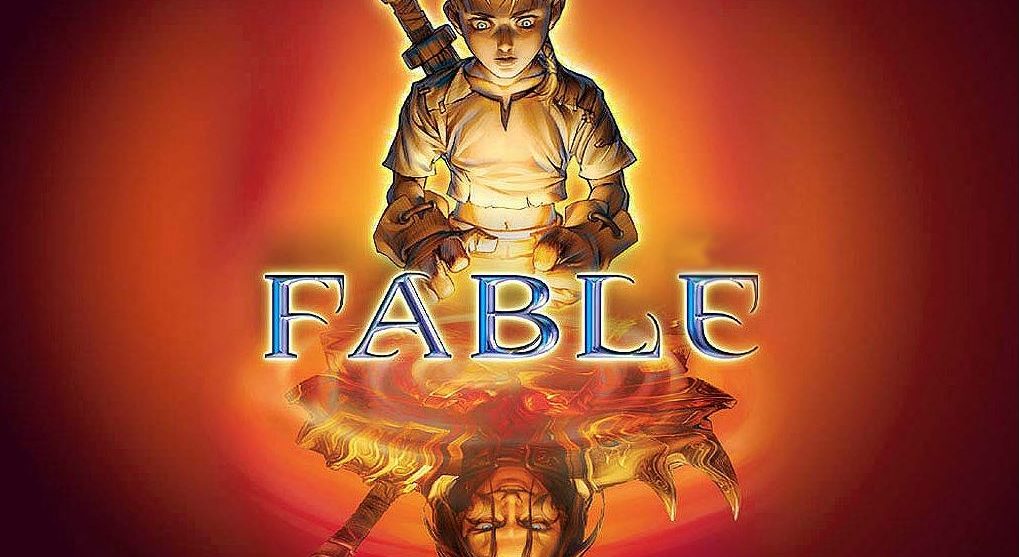 Fable’s are ancient. Fable the video game isn’t all that different. It came out in ye olde 2004, which is long enough ago for me to have played it as a kid, and I remember loving it. And now it’s getting a HD remake, which is what inspired me to take another look at it. I do remember it being so good I bought it twice, once the standard edition and once again with all the extra “lost chapters” stuff. I don’t seem to remember the graphics being particularly bad but then again, I was a kid, and this was an Xbox game. Modern PC gaming has spoilt me somewhat.

You’re in the land of Albion, and from there Britishness is just piled upon Britishness until the whole affair looks like a foot high stack of crumpets. Everyone you’ll meet is british, and they twitter on britishly. Some of the doors have giant magical heads which challenge you to riddles in British accents. Occasionally somebody will call you a “Balverine turd”, Balverines being the local name for werewolves. This is all very quaintly british. Though you’ll end up drinking more beer than tea, so at times it’s more modern than it might want to be. Kicking about the heads of your enemies is almost more fun than chopping them off. ALMOST

Fable’s the kind of game you’d have designed when you were a kid, which is pretty weird for a kids game. I mean, a action RPG for kids is typically a pretty bland affair about truth and justice where nobody really dies and you ride a giant sparkledragon into the villains castle and beat him silly with a plastic sword. Around this time, he’ll typically monologue about his terrible childhood, how he never ate his greens or did his homework, and surrender. They you’ll just hug it out.

Even as a kid I knew that was bullshit. Fable knows it too, and while it’s still full of bright and whimsical characters, it also knows what kids want. And what kids want is the option to decapitate bandit’s with over-sized weaponry and then kick the head around the field like a particularly grim game of soccer. Fable is full of this kind of thing, and despite it’s cartoony visuals, it’s not afraid to mess about with some fairly adult themes.

Perhaps the best example of this is the intro. You start up the game and it’s your sisters birthday! Oh MY! You’re hurriedly informed by your dad that he’s not bailing you out this year since you’ve obviously forgotten to get her a present. You’re then challenged to do a couple of tasks around the town, saving money to buy her a box of chocolates from a wandering trader. Your options here are bountiful, and do a pretty good job of introducing you to the morality system. There’s an infidelity to uncover (and, if you feel like it, re-cover for a bribe) and a bully to fight. There’s also vandalism to get up to do. Did I mention this game was British? Complete these challenges and presumably your parents will leave the room, happy with their choice of responsible and child friendly entertainment. At this moment the bandits attack.

You get snatched up by a conveniently passing mage and it’s revealed, through a voice-over and a panning shot over a stained glass window, that your whole family is dead. Both parents tortured to death. And that sister you’ve been labouring over? Eyes cut out and left to wander the forest. The story might well be the best part of the game, which is lucky really, if you think about what it’s called. The villains in this game don’t fuck around. It’s a theme the entire game seems to be based around, especially in lost chapters. For anyone who’s not played the lost chapters stuff, it adds a new extra chapter at the ending, a bit of content around some of the more interesting characters and a couple of missions which were cut, I’m starting to think, because they delved into the realms of non-fucking-around too greedily and too deep. One of which is a extended fechquest in which you have to track down “spiritual traders” to track down a kind of “occult mushroom”, or “magic fungus” if you will, so you can give a bag of them to a witch in exchange for a cure for this kid who ate one. He can’t do it himself, of course, because he can’t stop talking about how his legs are growing arms and flying away. The other lost mission is somehow even weirder that this. It’s about a brothel in a haunted forrest. And what you do in the brothel, obviously, is whore your way to the top in a alcoholic cross-dressing bonanza in which you end up seducing the shortsighted brothel-owner Mr Grope with the goal of stealing the deed.

This game, I should point out, has a quest in which you have to fart on a beggar.

All in all, you can best judge fable series by thinking about it’s sequels. They’re fucking awful, and there’s three of them, with soon to be a fourth. And the HD remake will make five. When a game’s fall creates that kind of a fucking crater, you know it must have started pretty high up. That Fable 3 and “Fable: the journey” even got made is a testament to the immense brand loyalty this game managed. Hell, I loved it so much im still looking forward to fable 4 which, if it continues the series current trajectory, will involve injecting flesh eating scarabs directly into my genitals. That’s how good this one was.

It’s a world of whimsy and joy, if that’s what you’re looking for. I took to playing it as a violent alcoholic who murdered wandering traders and kicked their heads into piles. It’s what you make of it, and coming back years later I found whole new things to enjoy.