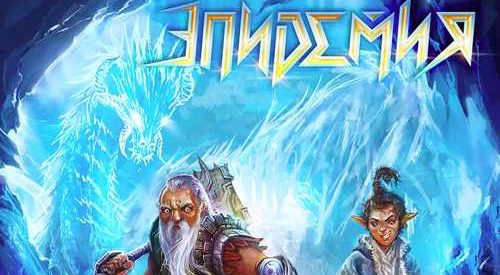 I would be lying if Эпидемия’s (Epidemiya/Epidemia) seventh full length did not cause a silent gasp of excitement. Not only does the cover depict the plight of ice dwarves with some type of treasure but I have no idea what any of it means. An obsession with fantasy in other countries is charming because it speaks to a sense of global geekery that transcends language barriers. While folklore and mythology are certainly interesting, I also like seeing the word “hobbit” in different languages. I am trying to think of how this could possibly go wrong.

Russian power metal is not a novelty, as the country and surrounding Eastern European territories put out a modest schedule of folk and power metals. Epidemia, despite working for the better part of the decade, never achieved the same sort of recognition as their western European counterparts. This is disappointing, as the band’s enthusiasm and production prowess makes for a rousing, yet sometimes odd, power metal odyssey. It would be important to note that Сокровище Энии (Treasure of Enya) boasts the same lineup as 2011’s Всадник из Льда (The Ice Rider). This fact is important as the band has gone through various iterations leaving a noticeable but not completely new sound. If this is your first trip with Epidemia, just relax and try to have a magical time.

Aside from the folk influences that skirt around the edges of Сокровище Энии (what is this?), Epidemia is more concerned with crafting soaring hooks, which sometimes wander into a Europop structure. Each of the songs pulse with synth and vocal melodies, which are sometimes befitting of anime credits. “Где рождаются рассветы” is perhaps the albums most memorable track with both troll like vocals and a chorus which can set the future ablaze with love. With that said, the ongoing vocal dialogue between “Juron” Melisov and Evgeniy Egorov makes for more than an entertaining time with the patchwork of the three guitars and synth construct a narrative texture for the album to unroll. I still have no idea what is happening in this album but I know I will love it until the end of time. This maybe an unfair review for me because I know I loved it before hearing it.