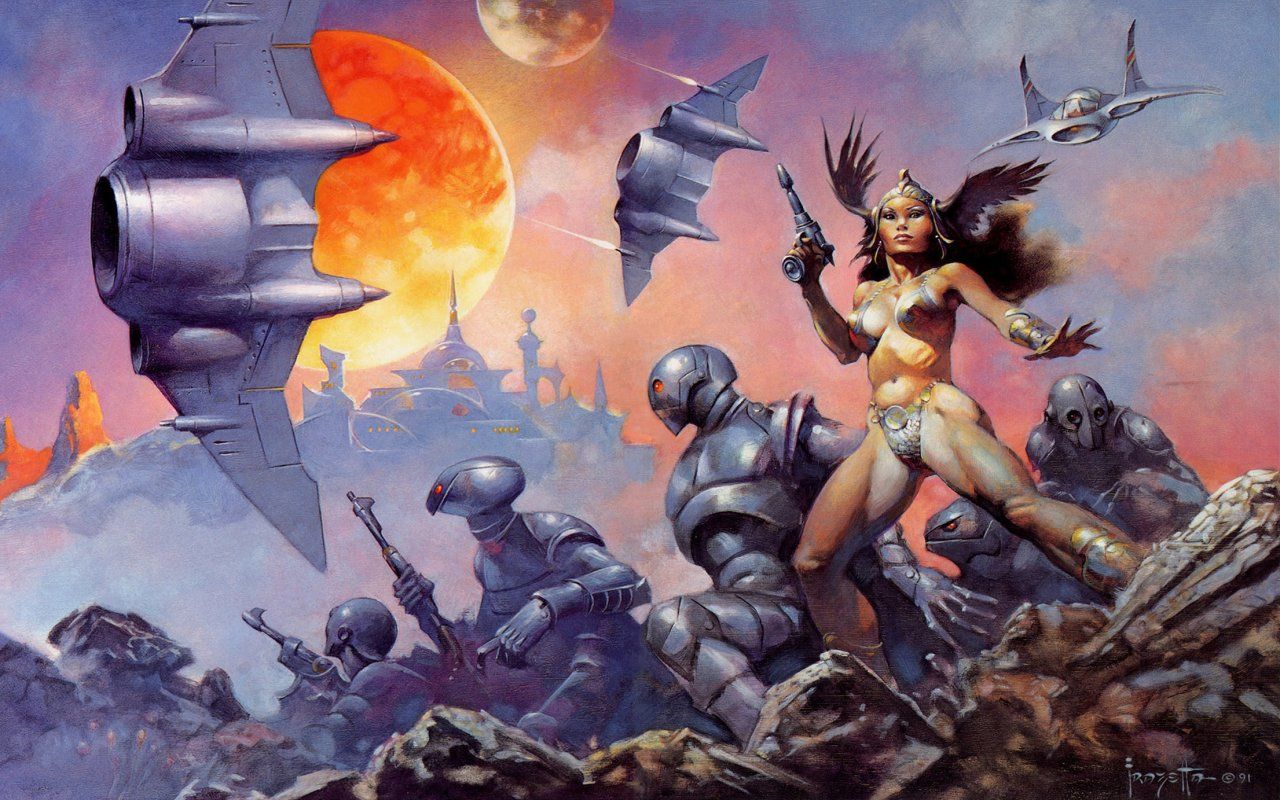 This is the first installment of a 12 month series investigating new heavy / traditional / power / speed / doom which seems to be experiencing a new found popularity. We are not in a new wave of anything rather just in a time when more people are paying attention to this style of music.

Also each section will feature a different painting from the mater fantasy weaver Frank Frazetta. January’s image is Dawn Attack painted in 1991 which was used on the Science Fiction compilation L Ron Hubbard Presents: Writers of the Future Volume VII. The painting features a metal clad Valkyrie leading an army of robot men to victory by the dawn of some distant planet. I can not think of a better image so apt for the maiden voyage of this column. Far well young warriors.

Finland! Finland! Finland! Baltimor has been operating since 2014 and I am wondering if their debut garnered any sort of attention. Equal parts speed and heavy metal, Baltimore skids down the windy road of Motorhead worship never slowing down enough to be derivative or boring. the gruff vocals maybe similar but with all of this drinking and smoking at some out of the way roadhouse, I didn’t even realize. EEPOS is a late night in a shitplace where loving and fighting probably feel the same. What a way to kick off 2017.

Oh man Sweet Lich. when you first lay your eyes on this record it is big in the way of costume. From the logo to the album art, Sweet Lich creams 70’s throwback in the way a boogie van would cruising down the street billowing with pot smoke out of the windows. Never Satisfied certainly starts out with more costumes than serious weight but after the entirety of the record, this Swedish band has the talent and merit to make a serious dent and Never Satisfied ranks as one of the more entertaining heavy metal albums in recent memory. One just has to come to terms with the vocals and then after that, it is all stoned sailing.

I do not know what to think of Skycrater. Here is a Chinese outfit that seems to be obsessed with Nordic or at least European fantasy motifs. This is the second record for the band that continues a conceptual theme dedicated to a fantastic lore. While the production is lacking and the whole album could use a bit of a punch, the charms and grace for this band in addition to their hometown is interesting given the style in which they play. I do not know if it would be different, better, or worse if the band embraced local folklore instead of western fantasy but these are the question which keep me up at night.

Oh man, this is great. French heavy metal that takes their cues for epic and war driven music from the book of Manowar. This is the third record for the band whose use of the French language is like a fail waved around their head on a battlefield. Powerful without ridiculousness and earnest without shades of fun, this is a band who has three solid albums worth of material for anyone willing to charge into battle behind a rolling cannon. Montjoie!

Supposedly this is a parody band or at least a carefree side project for the members of Night Mistress. I think If I understood Polish, I would get a joke but to be honest most of the material covered by Nocny Kochanek isn’t that far off from what other power/heavy bands do and in fact fits much better due to the talent from each of the members. Fun, energetic, and the ability to ignore silly lyrics, Zdrajcy Metalu is for anyone who wants to kick back with a bottle of vodka after a long day of work.