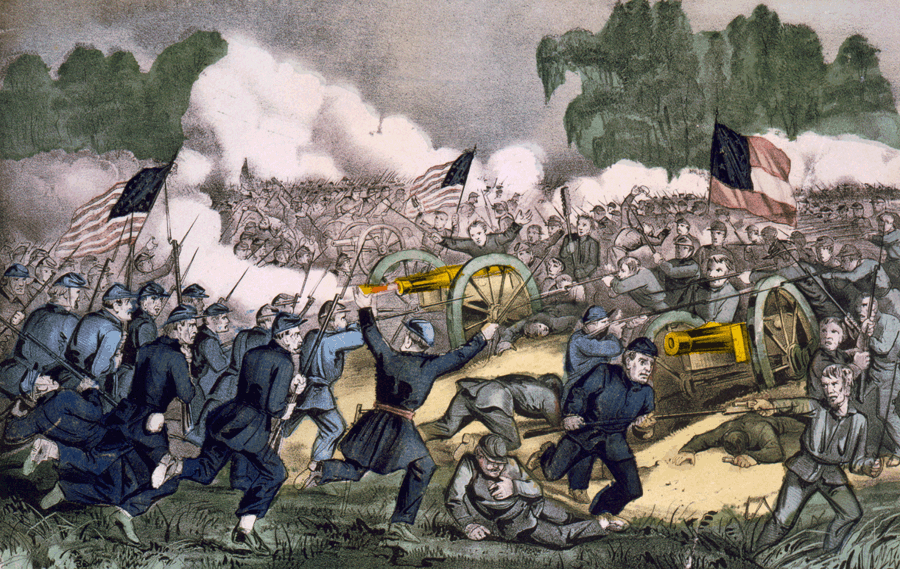 History is filled with tons of drama, blood, gore, and probably more blood. It is no wonder that heavy metal draws on history as inspiration for some of the greatest songs of all time. I can really only highlight one example, but suffice to say, history is filled with badasses, archvillians, and crazy stories. Just turn a Ken Burn’s documentary on and crank up the tunes!

The Battle of Gettysburg was a decisive point in the American Civil War. During this three day bloodbath, the Confederate forces, lead by Robert E. Lee, were repealed by Union troops, specifically George Meade and his Army of the Potomac. Though Meade had a long history of fighting local populations, both Native American and Mexican, he is best known as the General who defeated the South in a turning point that lasted only a few short days and struck up a death toll in the thousands, the Battle of Gettysburg. The war would continue for two more years but the Battle of Gettysburg has been cited, and argued by historians, as a pivotal turning point in the war, where many men were struck down in the name of Union victory.

All of this may not be new to people, since the Battle of Gettysburg and the Civil War are taught heavily in American education curriculums. This doesn’t mean it can’t be exhilarating to discuss, especially when done by Iced Earth’s John Schaffer. Aside from being in Iced Earth since their inception and playing guitar in Demon and Wizards with Hansi Kürsch, Schaffer loves to read about military history. This is evident by Iced Earth’s 2004 double record The Glorious Burden, that includes a 30 minute love letter penned to the heroism seen at the Battle of Gettysburg.

In July 1863
A nation torn in tragedy
A trick of fate,Two great armies merge
Gods of war at Gettysburg
Devastation lies ahead
50,000 bodies litter the land
Hell rages three full days
The reaper sows, there’s the devil to pay

The pressure’s on and the reb’s attack
The yanks must hold, They can’t fall back
Just two brigades, 2000 strong
Against 20,000 they can’t hold long

Thanks Schaffer. Your love for history and metal has truly helped me during history class.