The Pledges of Happenstance [Playtest] 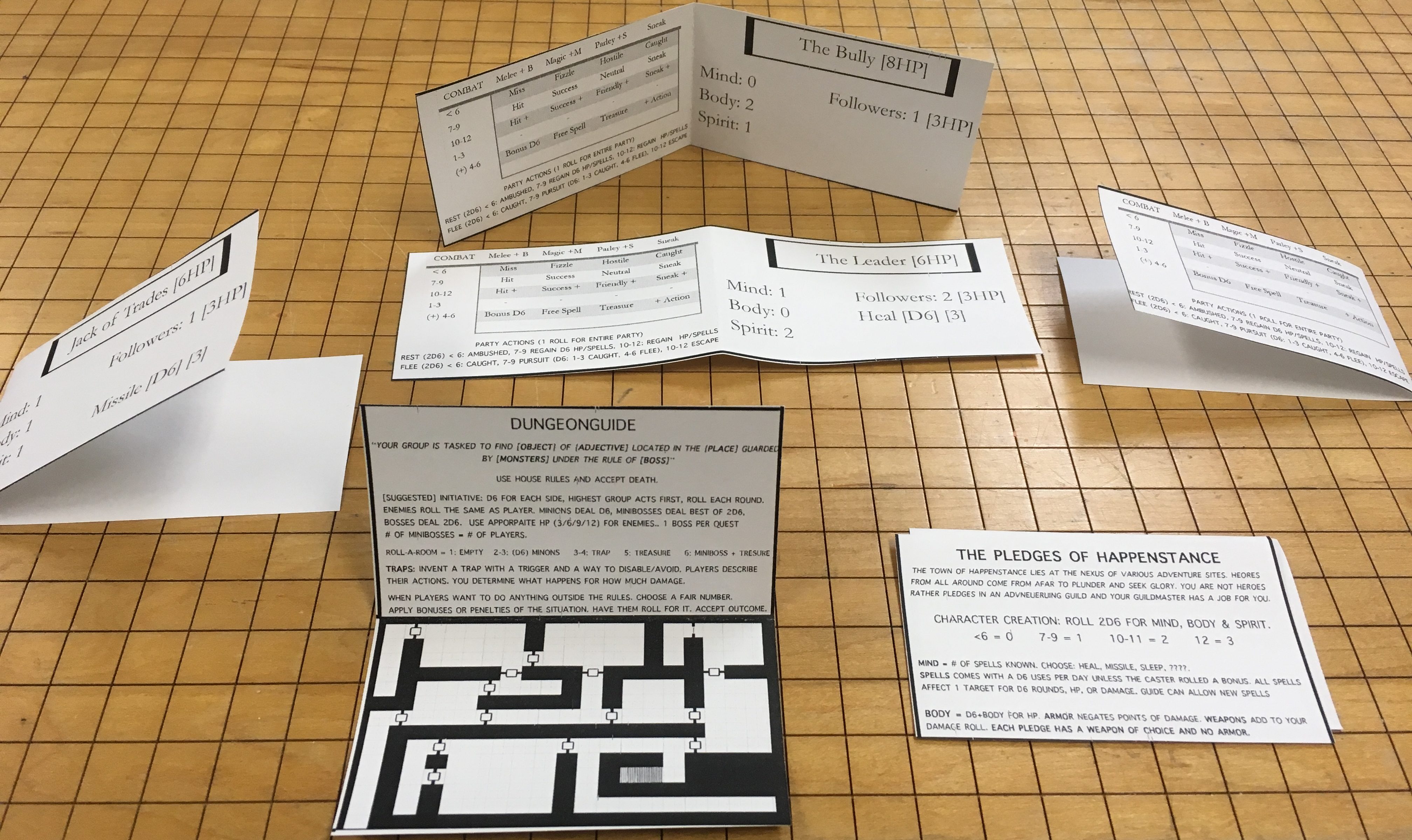 The Pledges of Happenstance was created out of both want and necessity. I wanted to play games at different places and my friends who I eventually convinced they needed to have it wherever we went. If you are like me, there is a desire to combine gaming with various social activities. While sitting at home playing at a proper table is always enjoyable, pick up games at unorthodox locations can be fun when everyone is in agreement with the idea. A bar or restaurant location with table and drinks is similar to most tabletop setups that I am surprised that more pocket sized BARpgs haven’t been created. I wanted to have a game that I could fit into my pocket just in case people wanted to dungeon crawl when we had a short amount of time.

This game is a combination of various mechanics designed to fit as little space as possible. In this case it is 6 business cards. Intended to be played with 1-4 players plus a Dungeonguide, the game attempts to replicate old school crawls complete with action tables, frequent death, and encouraged house rules. Inspired by the dozens of one sheet RPGs found online and games like Dungeon Crawl Classics, Dungeon World, Sellsword, and Rogue, the game uses either a 2d6 or a d6 to resolve all action and damage with the main goal of clearing a “dungeon” of all of its generated contents. I wanted a game that could be easy enough for other people to learn and run as well as something sturdy enough to support more creative roleplaying.

Happenstance is a town I have always used in convention scenarios and one shots. It is the default town which leans against every fantasy trope in existence. I adored classic Dungeons and Dragons scenarios where the town was home base with untold adventure just lying beyond its borders. The town of Happenstance located by mystical chance, within traveling distance to various crypts, castles, caves, and chasms that all held potential riches. Adventurers would flock to this town and constantly be going on quests for fame and glory. Guilds were formed to take try and maximum adventuring by pooling resources and offering the services of able bodied adventurers. Since some jobs would be too high risk / minimum reward for high ranking guild members who would in turn pass them off on the eager pledges of the guild.

This is where the players come in. 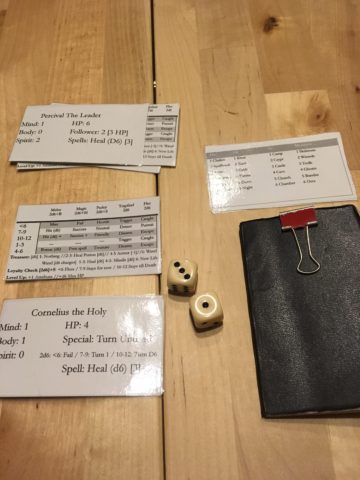 The sheet comes with 4 pre generated characters but characters can be rolled before the game with information written on a scrap of paper. The Dungeonguide can either randomly generate a dungeon for the players or craft a more unique adventure. Since most of the game is borrowed from other games, the main goal isn’t to learn a new system or game lore rather of having fun for x number or minutes or hours. One of the more fun aspects of the game has been the cruel and uneven gameplay ranging from a room full of difficult minions to empty rooms stocked with game breaking treasure. Even though I love the comfort of longform RPGs, engaging in wild and unpredictable games that have a time constraint is as entertaining. The emphasis on house rules is as much for smoothing as it is for accelerating hilarity. A wild wand that either cures d6 or damages d6 is something that probably would be thrown away in a long form game but down in a dungeon when clinging to 1hp maybe ones only shot.

The game is presented to have different modes of playing. While one can certainly play it very methodically with room genertion and rote room clearning, there are some rules in place for more advanced gaming. The open ended nature of trap construction also allows would be and veteran Dungeonguides to try and challenge their players or break their will. I used some of Grimtooth’s Traps for some of my more elborate trap construction or just had a simple dart trap that would trigger when a coffin was open. If the players would want to investigate or do more than kick down a door, the three attributes of Mind, Body, and Spirit can be related to the classic D&D attributes of Strength, Dexterity, Constitution (Body) Wisdom and Intelligence (Mind) and Charisma (Spirit). The 2d6 skill check with attribute bonuses is loose and sturdy enough to aid in supplemental actions that do not involve hack and slash. While this game has an emphasis on bloodshed, listening, perceiving, thinking can be fun and entertaining for players as much as frequent death.

One of the main reasons why I am writing this article and sharing this game on Reddit and Imgur is to have people print it out and play it and see if it can be made better. Most of the playtesting has been at festivals and camping with a lot of the best rules not written down. This is my first attempt to consolidate these rules and see if this can be made better. In my wildest dreams, it would fill a gap for the social gamers who love to go out to concerts and bars as well as roll dice. The concerts I attend have a high crossover with people who enjoy fantasy so the jump from festival attendance to festival RPGs was that great of a stretch. If you happen to print this out and play it and have questions or compliments or criticism, feel free to send me an email at kaptaincarbon [at] gmail [dot] com or leave a remark on this page. In the future I would like to make this game look a little nicer and maybe print it out on cards to give away to people. 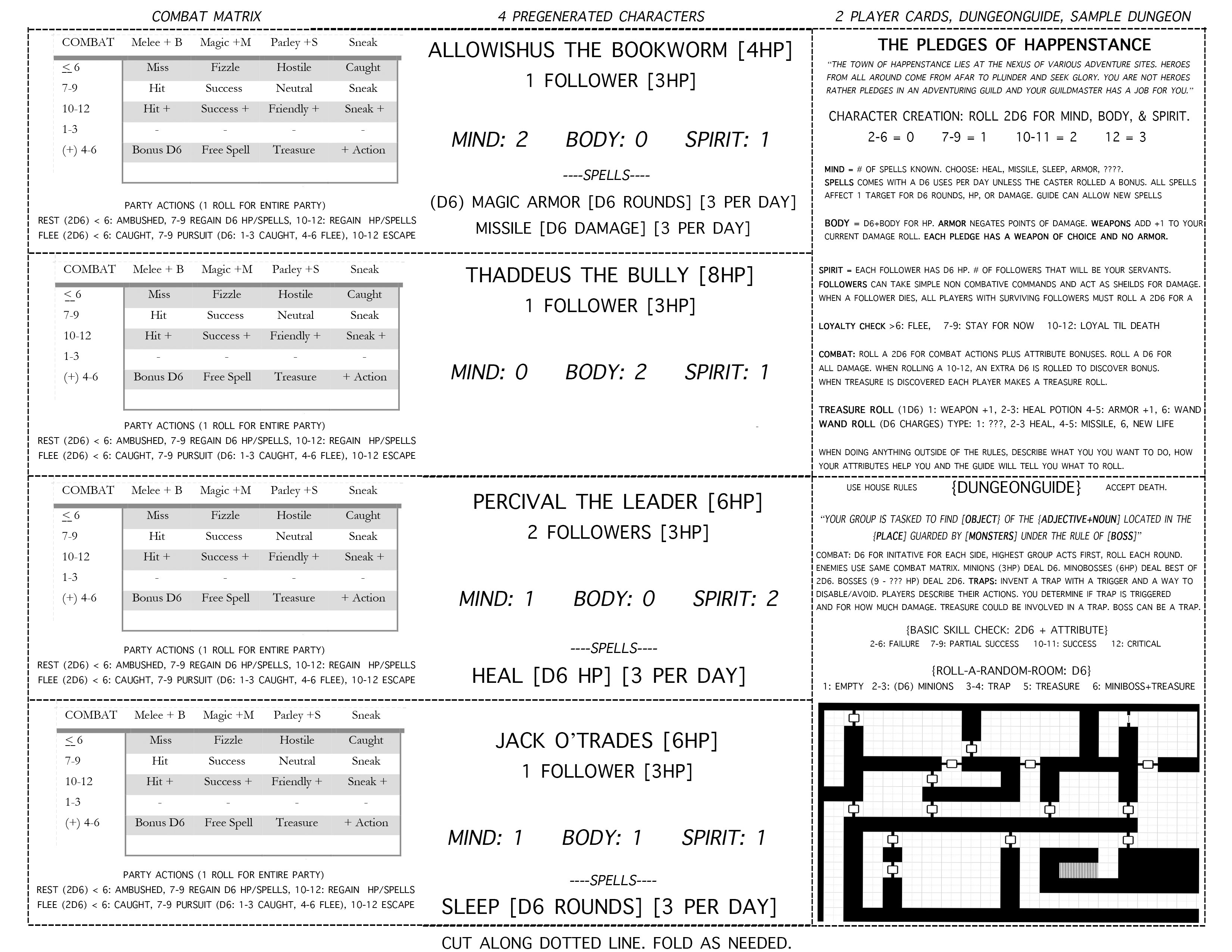