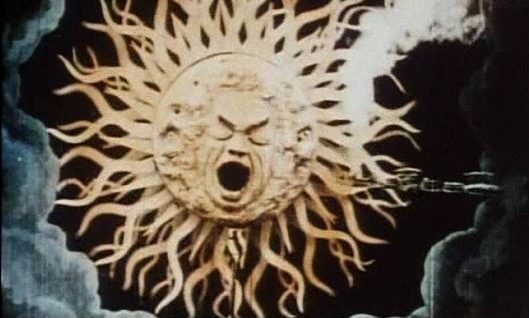 A few years ago, for the months of Autumn, I ran through the highlights and gems of early Horror beginning at the Phantom of the Opera in 1925 all the way to the early 60’s Hammer films and the revitalization of classic monsters. It was during this point that I found myself drawn to early cinema as a bold frontier in film-making, as many aspects that have become commonplace in cinema were still being toyed with and experimented. Take this and add the theme of fantastic storylines and one has a bizarre and wild combination, which is as hypnotic and endearing as modern and contemporary film-making. I do not think it is only because I adore fantasy that silent fantasy films are so attractive. The wonder and escapism of early film in culture is almost palatable and its fantastic storylines only mirror the excitement. There are going to be a dozen or so short films discussed within this, but it would almost be impossible to discuss fantasy in film-making without beginning with Georges Méliès. Georges Méliès, at this point, is almost indispensable when discussing not only fantasy film-making but film-making in general. Méliès was a French stage magician whose work along side of the Lumière brothers revolutionized film-making and the possibilities of what could be seen. But you know all of this. In 2011, the Martin Scorsese film, Hugo, was released to wide acclaim and was awarded several Academy Award nominations. The film was based on a 2008 picture book of the same name with Georges Méliès’ films used as inspiration and the centerpiece of narration. It was all very dreamy and filled with childlike wonder, which pretty much illuminates the work of Georges Méliès. One of his most famous films, 1902’s A Trip to the Moon, detailed the exploits of a group of astronomers taking a trip, surprise, to the moon. A still of the man in the moon with a spaceship in his left eye has become famous. While discussing Georges Méliès and A Trip to the Moon is important, it has also been done many times elsewhere. Though many people recognize A Trip to the Moon, seldom do they travel through Méliès’ other works, including the film’s 1903 sequel. The Impossible Voyage was released in 1904 and was based around the Jules Verne fantasy play Journey Through the Impossible. The Verne play is connected to a much longer tradition of fantasy theater called faeree, but we do not have time for that. Suffice to say that Méliès’ film continues the tradition of hyper dramatic narrative that is both goofy and lovable. A group of geographers embark on a mission that is to be the most daring expedition ever undertaken. Everyone involved in the production has flowery names like Rattlebrain, Humbug, Polehunter, and the ringleader Crazyloff. The group of scientists and passengers boards a locomotive train and then attempts to use the sides of mountains to take a trip into fucking outer space. I feel even in 1904, this was fantastic and utterly improbable, but for the sake of the movie this is the easiest way to get into outer space. Well, this is it guys. We are going to die on this ball of gas we can for some reason stand on. It is sure hot up here.

One of the most endearing qualities of the Impossible Voyage, as well as A Trip to the Moon, is the absolute love for transport. While in today’s age, taking a Bus 4 hours to the city for the weekend is literally the worst thing ever, the simple pleasure of travel was something very different at the turn of the 20th century. In these few films, Méliès’ captures the flare of unbridled imagination that came with the wave of technological innovations. Sure, using a mountain to ramp to the goddamn sun was improbable, but it was something that was fun and imaginative. It should be noted that the complete lack of scientific understanding about space travel was done at a time when that sort of science still lied on the edge of fantasy and understanding. The early work of Méliès’ shows the development of science fiction through the public’s sphere of very rudimentary scientific knowledge. The Impossible Voyage shows a culture at the cusp of a steep cliff of innovation. It would still be decades before artillery would climb into the upper reaches of the atmosphere. There is something fantastic, nostalgic, and heartwarming about a time when using a mountain to climb to the stars was not probable but perhaps a good guess.

It is hard to evaluate Méliès and his films without tying it to the time period. Each generation proposes a different place in cinematic experience but silent films, and especially ones before 1910, are going to require much more patience and understanding. In the place of fluid storytelling and immersion lies a simple fact of wonder. The impossible Voyage does not represent a hilarious misunderstanding of science rather a time when literally anything was probable. The work of Méliès is indispensable in the history of cinema and his work with both transportation films allows the simple act of getting on a bus for the weekend to be a step into the unknown. Alright, getting on a bus still sucks, but next time just imagine you are going to go to the fucking sun.