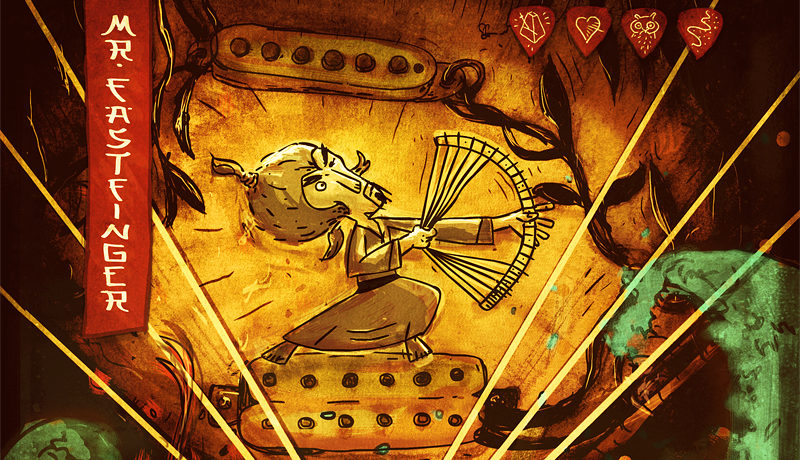 Wait. Why am I here? Hello? Hey, is this because I did a review on Altar of Plagues. Was that too hip for you guys behind the two way mirror? I’m sorry alright. What is this? Where am I? What does this pamphlet mean about rehabilitation through shred guitar? What is that funny smell? Why am I getting sleepy? Why is the floor above me? Help!

The world of virtuoso guitar based music is a funny one. The music is both performance and exposition based on exercises to showcase talent. Because the music is so purpose driven, aesthetics usually fall on the fun if not silly side. Take Mr. Fastfinger and his band and take his new EP Stringweaver and then decide which level of seriousness you would like on the side. While my original summation of this music may seem a bit negative, I haven’t even gotten to the part about how fucking fun it is to listen to.

Mr. Fastfinger is an avatar for Mika Tyyskä and began as an animated guide to guitarshredshow.com, a combination of music game / online tutorial which sort of just became Tyyskä. Virtuosos are not above artistic personalities. In fact, I think it is sort of required. Mr. Fastfinger and his band have had two reasonably publicized records and now a 4 song EP thrown in the middle of 2013. Oh, did I mention the whole kung fu motif? No?

It may take a little while to adjust oneself but once positioned correctly, virtuoso music can be rewarding and damn entertaining. Because talent is the main priority, songs will be incredibly accessible, smooth, and with little challenges. That is of course, unless we are talking about bass virtuosos. Yeah, that’s right Jaco and Victor, I am looking right fucking at you. Much like Yngwie Malmsteen, Buckethead, and everyone’s favorite quad neck shredder Michael Angelo Batio, Mr. Fastfinger constructs songs that are more like water slides which do 5 loopy loops and send the listeners through seven hoops of fire all while on a motorcycle. It’s the strangest water ride ever.

Stringweaver follows the very well planned and thought out Motion in 2012. While Motion had a larger story and structure, which I am sure involved fighting, Stringweaver seems to be a transition record. While the larger narrative is gone, the short 18 minute running time allows for the music to be heard, enjoyed, and remembered without wearing out its welcome. Whether or not it is the chiptune flash of “Awaki-Waki” or the subterranean maze of “Nightvision,” everything on Stringweaver stays for the perfect amount of time.

Music like this sort of skirts criticism because of its nature of levity. If I were to point out any flaws, it would be the occasional use of vocals done in the voice of the kung fu character. Really though, if I am this far down the water slide and I am going to complain about a virtuoso record not being serious enough then I have a problem. Mr. Fastfinger’s Stringweaver is a competent and fun album made by musicians who have a desire to teach and make the world a fun, guitar-filled place. Who am I to complain anyway? This gas has made everything alright again.