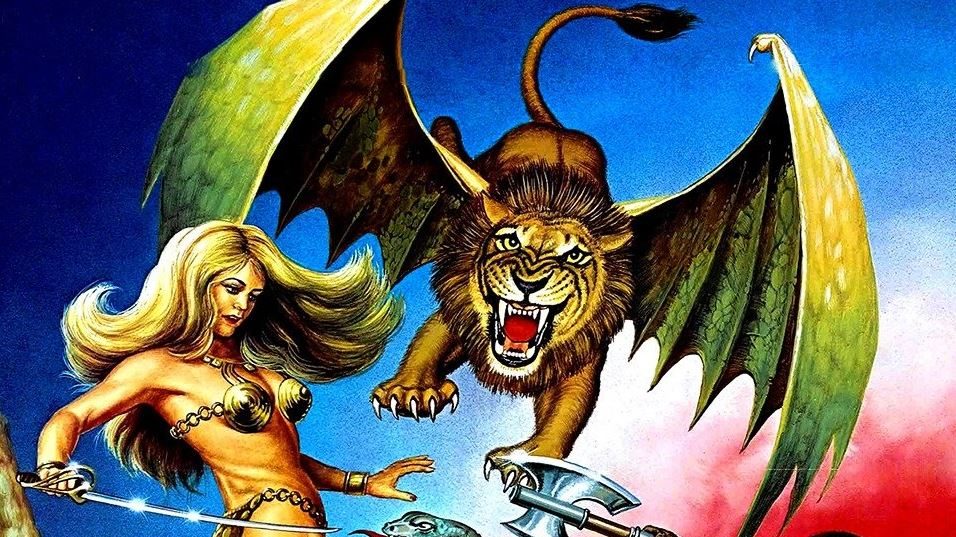 “The evil wizard Traigon must sacrifice his firstborn child in order to maintain his powers. This prompts Traigon’s wife to run away after her twin daughters are born. When death is near, she gives the girls to the warrior Krona, who has promised to take care of them and raise them to be exceptional soldiers. Twenty years pass, and Traigon begins to hunt for his daughters to make good on the sacrifice, and the twins, now skilled in warfare, are forced to do battle with their father.”

I think if anything you can look at this Youtube synopsis for the 1982 film Sorceress and be content with your life. If you want to travel down the road of “entertaining yet unnecessary” then it is time to take a ride into fantasy with dashes of exploitation and pulp cardboard acting. There is a good reason why Sorceress is coming in the second or third wave of execution into the fantasy films of the 1980’s. History places this film as a hastily constructed clone of Conan the Barbarian but by most accounts, Sorceress was released a few months before the famous Schwarzenegger film so I really do not know what inspired Sorceress. I actually do not know the release history but the popular narrative of this as a copy of Conan makes more sense. Packed with cheap nudity, needless acting, and a “fuck it why not lets call it Sorceress” approach to storytelling, this 1982 film is a perfect addition to any library that perhaps doesn’t need to be mentioned to loved ones. I am starting this review sort of negative but there is only room for growth. If one goes into Sorceress with the right attitude in terms of attitude and evaluation, then it is an invaluable artifact in the cross section of exploitation filmmaking and third tier fantasy stories. Looking at the production crew for the 1982 film, Sorceress is a bizarre yet exciting mix of exploitation alumnus and legendary producers also in the same walk of life. Sorceress would be director Jack Hill’s last film ending a career famous for films such as Switchblade Sisters (1974), Foxy Brown (1974) and the Pan Grier vehicle The Big Doll House (1971). Jack Hill would be a beacon of inspiration for directors like Quentin Tarantino and Hill’s early exploitation work would be the ones celebrated with his final fantasy film an obscure note in history. Jim Wynorski, famous for films such as Chopping Mall (1986) and more importantly Beastmaster 2: Through the Portal of Time (1991) would quickly put together the script before return to writing Deathstalker II a few years later. Sorceress would also be “produced” by the famous writer, director, and actor Roger Corman. Corman would produce a lot of work from in the 70’s, with the bulk of these films, now cult classics. Again, Sorceress, along with the Deathstalker films, would be more esoteric entries in an otherwise celebrated career. In a career full of embarrassingly amazing films, the fantasy work of all o these veterans seems to be forgotten by most of the population. So what do we have with two famous visionaries in a niche style making a film that not even its fans remember? Well, how about a satyr that bleats like a sheep and an end fight scene that is better just as a picture.

It is difficult to pinpoint what makes Sorceress so terrible and wonderful. Perhaps it is the pacing or lack or story or wooden acting or perhaps a messy combination of everything. Besides the bleating satyr and a child in a monkey suit which populates the background of certain scenes, and the eventual real life fate of the twin leads in a 1990 tax fraud via sex exchange, the existence of Sorceress is unremarkable yet bizarre in its mediocrity. The film could have been an early example of two female leads dominating a genre populated by muscled men. Sorceress however has the two leads, Leigh and Lynette Harris as awkward torchbearers in a film muddied with cheap entertainment and stronger male co stars, Bob Nelson as Erlick and Bruno Rey as Baldar to help them along. Sorceress, despite all of its mundane and stilted qualities, is hypnotic its uncaring approach to the story. Almost everything about this film feels like it is doing other things at the time and the AFK tone of the film makes for enjoyment once one gets into the right mood.

Coming from a background of exploitation, cult films, and even B-movies, Sorceress is not going to be a party film but rather one you can have on while doing other tasks. Perhaps that task is writing a film review on the movie for a fantasy website. Perhaps it is folding laundry. Whatever the case, Sorceress and its related history are fine additions to your growing library of films that probably should be forgotten but somehow, people on the internet keep writing about them. If nothing else the end of this film with its hand puppet monsters and bat shit way they wrap things up is certainly worth staying awake for. If you fall asleep, then I do not think anyone is going to judge you.