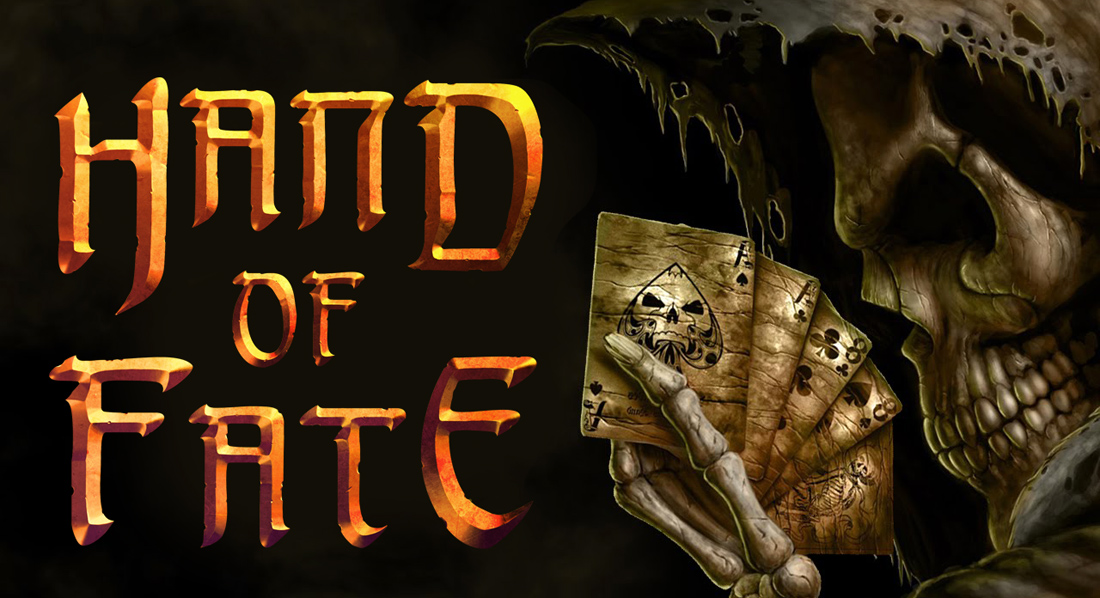 The trick when describing something like “Hand of Fate” is to keep yourself from talking solely about what it’s not. It’s a card game, except not really, what with the third person combat ultimately deciding most of your fate. It’s an RPG, except you don’t really level up or travel anywhere, and spend most of your time collecting cards. It’s a dungeon crawler, except you spend the entire game sat at a table, watching a hooded man with a voice like honeyed pork smugly performing card-tricks and occasionally calling you a prick.

It’s great, except it ends a little too quickly.

Or, if you want a description that’s slightly less pretentious, Think something like Clue, if there was a chance that each time you discovered a new room the gamemaster would draw a murderweapon, hand you a candlestick or length of lead pipe, and try to beat the snot out of you.

It’s this twist that makes the whole thing work, honestly. Not one of its components would be enough to base an entire game around, but the mix of them all is both substantial and interesting. While the dry navigation of the world and the slow, even ponderous consideration of options and probabilities will appeal to the strategists, the hectic combat offers a more direct, no nonsense thrill. Some cards are entirely luck-based, such as the river or the canyon, though they weigh themselves in and out of your favour by the balance probability, while others are only heavily skill based, like the crucible, which rewards skill against randomly generated enemy assortments with randomly generated quantities of gold. As with any game this involved with luck, the heavy handedness of fortune can lead to some uniquely difficult scenarios. In particular, I remember a late game dungeon that I knew somewhere contained the ferocious rat king. Through the three floors before him luck had been with me, giving me some remarkably good gear and a sack bursting with food and gold. At the final floor I felt confident. While the combat can be dicey when vastly outnumbered and the rats love of poison is particularly dangerous, Enough luck in the early game can tilt the odds in your favour permanently. Entering the final floor, I had full health, plenty of supplies, and more than enough gear to survive anything the greasy rodent could throw at me.

Six turns later, I was dead, and it was only partially my fault.

It’s all thanks to a card called “Heroes return”. Uncovering it means you receive two powerful items; a shield and a sword, but have only three turns to deliver them home before your max health is reduced by half. Making the delivery means you get a free blessing (a buff of variable usefulness, from a slight boost to cash generation to the literal thunder of the gods smiting your foes) but, whether due to a glitch or the capriciousness of fate, the delivery spot was placed four turns away, dooming me to drastic weakness. Of course, I still had a chance against the rodentlords. The game only ever delivers the death blow by starvation or combat, so you always see it coming.

And when it came in the form of a throwing knife, I knew I couldn’t dodge it. But I could’ve survived it, too, if the damn cards hadn’t turned when they did. Losing a game can be a serious pain, if only because of how long the later ones take. Labyrinths roll out ahead of you, and making it through without starving is one of the biggest challenges so whenever you do manage it it feels especially cruel to die anyway. This might have stalled my enjoyment entirely, were it not for the tokens. These are earned by succeeding at challenge cards for the first time. Each new challenge awards you one, and each new token brings new cards, keeping a heady stream of new challenges coming and keeping each attempt from feeling like a re-hash of the last one. It also gives you motivation to shuffle the deck often and try new things rather than finding a setup you like and missing half the game’s content.

Most importantly, it’s fun and experimental with witty writing and very similar art design to “Fable” and “Fable 2”, both excellent examples to follow. In short, it strikes me as the sort of side project Peter Molyneux would be making in the Fable universe if he hadn’t lost his talent in a card game with a mysterious old dude just before development of “Fable: The Journey”.