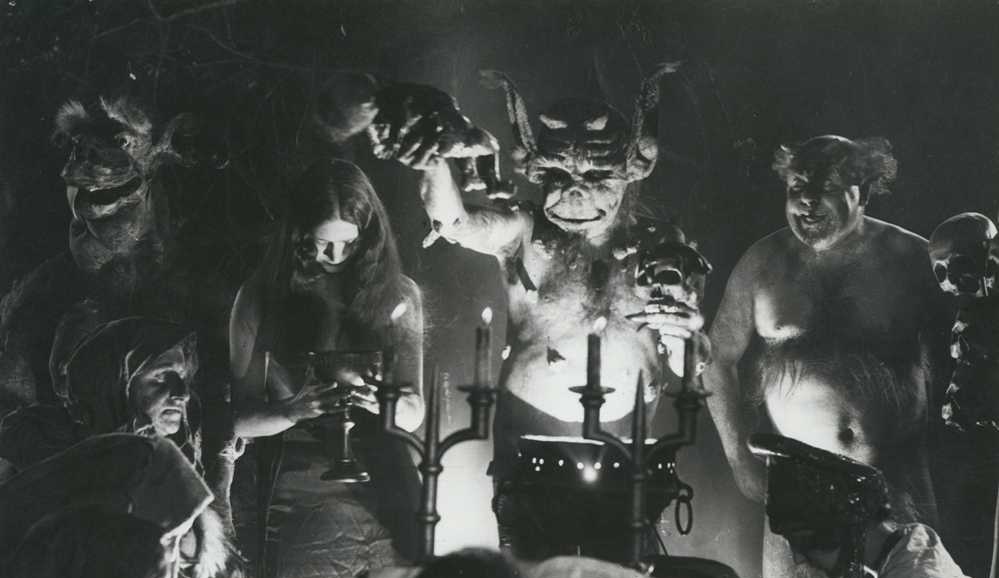 Holy shit guys and girls. So recently I have found myself drawn to early fantasy, science fiction, and horror of the silent film era. In the last review, we took a trip to the goddamn sun with George Meleieis Impossible Voyage. I enjoyed the films of the early 20th century for their brevity where 20 minutes was adequate time to digest wondrous travel. Now we have a film which is not only 2 hours in length but is probably one of the more dense subjects tackled in early film making. Holy shit guys and girls, are you ready for the history of witches through the ages and to read paragraphs of droll occult lore? Fuck yeah, I know I am.

The intention of Haxan was the analysis of witchcraft as a social construct and how mental illness and religious zealousness contributed to the hysteria of the occult. Documentaries in the early 20th century were actually well represented so Haxan was not that great of a milestone. The legacy this Swedish/Danish film left behind is perhaps unintentional as the live action reenactments of the subject matter was hellish and extracted from pure nightmare. Compared to many contemporary films of the era, Haxan as arguably the premiere horror film for its depictions of demons engaged in sacrificial rites. Whether or not it scared patrons of the time is of course apart of conjecture but I can tell you that in 2015, Haxan was and still is fucked up beyond belief. Are you ready to kiss the arse of Satan? As oppose to many silent films, having a translation is sort of important for Haxan. there is a lot of text and narrative. This is sort of frustrating as finding english streaming versions are either terrible in quality or avant versions of the film made in the 60’s. While many soundtracks have been made for Haxan, the majority retain the same supposed mood of foreboding doom. This combined with the imagery makes a wondrous experience. This particular film has gone through many iterations and finding the right one can be a chore with great reward. This is of course if you can retain attention for its duration.

The plot of Haxan is broken into lecture and vignettes. The first part details the views of the middle ages and their beliefs in heaven, hell, and the role of demons. The second part of the film throws the viewer into small tableaus of Satan and witches interacting with the public. From love potions, curses, profane dismemberment, to the devil literally surprising monks and fucking shit up, these scenes are weird and must have been terrifying for viewers of the early 20th century. the scenes alternate between informational and surreal as the film strikes themes of both horror and commentary on religion.

To be honest, you can pause any scene in this film and have a metal album cover.

For a film made in the 1920’s Haxan is surprisingly critical of the Church and its actions during the inquisition and salem witch trials. It is true themes horrendous time periods can never ben really softened but the tense torture scene of the seamstress in from the church judges is something that comes unexpected as well as the unequal justice system constructed by fear, misogyny, and power. Though Haxan is wild with its surreal scenes of baby eating and surprisingly sexual nature, it is the undercurrent of sober reason which is truly the most interesting aspect of the film.

Haxan’s third section is a long and arduous examination of the inquisition and the madness which overtook people like the plague. At the beginning of the final conclusion of the film, the filmmakers make mention that the actor who played the seamstress believed in the devil herself and had a book on the identification of evil. Many times have I mentioned the progressive nature of this film but the self referential nature of Haxan which toggles between documentary, hellish fantasy, and social commentary is astounding. The film ends with a connection between the witchcraft trials and the unearthing of the then contemporary psychological condition of hysteria. This 1922 danish/Swedish film was near light years ahead in its attitudes towards gender which is both interesting and embarrassing given what would follow after.

You can watch Haxan for many of reasons. The scene of the Witches Sabbath is so vivid and daring that the scene of the devil holding up an infant is perhaps the most famous still from the film. Though the film is 2 hours in length, its running time melts away as the viewer is pulled into a dated but still relevant topic of religion, fear, science, reason, power, and logic. Who would have thought that there would be so much to think about in the early dawn of filmmaking.