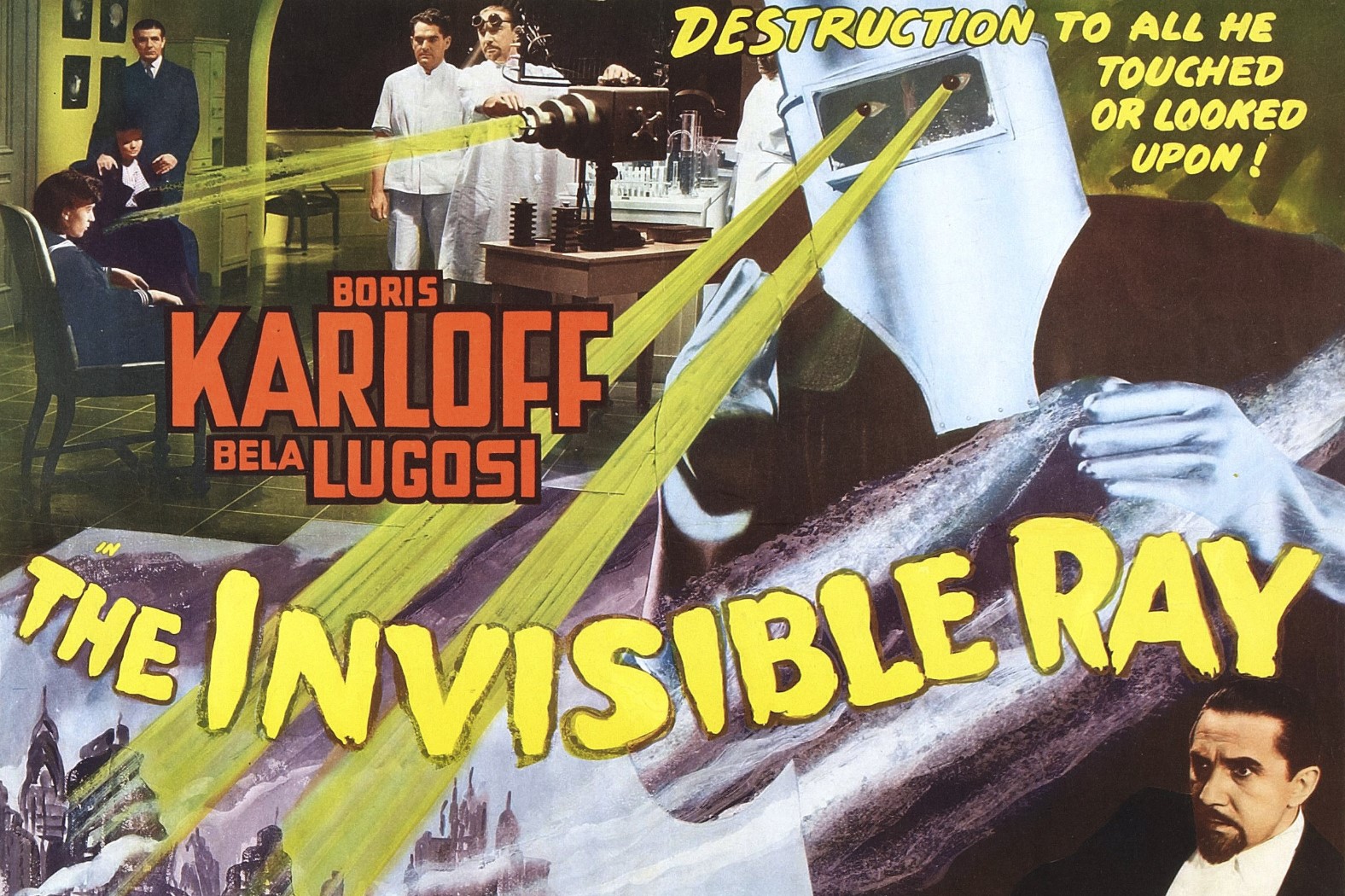 Along with The Old Dark House, The Invisible Ray is not a movie that comes up much in discussions on classic horror. This is strange, seeing how the film was also produced by Universal and starred two horror heavyweights Boris Karloff and Bela Lugosi at the height of their respective careers. Despite the casting and the production company, The Invisible Ray differs from the rest of the Universal monster group as an oddball for many reasons. Perhaps the producers could never find a way to get a death ray to the front of a cereal box.

Before we get into the plot, know that the narrative for The Invisible Ray is silly as it is centered around a telescope that can peer into the Andromeda Galaxy. Besides being super clear and precise, the telescope can also travel on beams of light and observe events that happened millions of years ago. Yep, you heard it right, a fucking time telescope. The Invisible Ray’s main protagonist is Dr. Janos Rukh, played by the very capable Boris Karloff. Rukh presents his findings from the telescope to a group of scientists and explorers who observe an ancient meteor landing in the continent of Africa. The scientists and adventurers then travel to Africa in search of the meteor for science purposes. This is the time where we get to see indigenous African savages leading white people around with science looking equipment. There they are, looking at impossible things.

The Invisible Ray presents itself as many movies. On the one hand, you have an intriguing sci-fi film about mental stability with Karloff as a strained scientist. On the other, you have a romance film as every station along on the film is complicated by his love for his wife Diana. Much like Frankenstein, which this film seems to take heavy cues from, the desire for self discovery and the ability to function like a human being are at loggerheads. The scientific expedition ends with Rukh finding the meteorite and fashioning a weapon from it that can kill, destroy, and oddly heal. Aside from making one of the coolest weapons ever, Rokh is also dismayed to learn that the chemical compound, Radium X, has poisoned skin, which now emits a glowing aura when the lights are turned low. That is right, Rukh is a human light bright.

It should be noted that The Invisible Ray was made as a vehicle for Karloff’s character. Dr. Benet, played by Legosi, acts a supporting role to Rukh’s unraveling. I do not know why Rukh is so upset as you would think having a death ray and super astro powers would be amazing. Right? Wrong. Rukh’s expedition is cut short by his fellow group of scientists and explorers as well as his wife’s infidelity, which leads him to become a crazed, supercharged, glowing lunatic. Rukh travels back to his home, cures his ailing mother from blindness with the death / healing ray, and departs for Paris to wreak havoc on everyone who has done him wrong. The Invisible Ray, while sounding like a slow moving sci fi drama, is actually a slow moving horror film with sporadic bursts of action. Rukh, now loopy on Radium X, fakes his own death by murdering a tender French hobo and then proceeds to find all the people who wronged him in Africa to take them out. He keeps track of his accomplishments by desecrating cemetery statues each time a murder is committed. Wow, this guy is stone cold creepy.

The underlying dark nature of the film is blunted and never allowed to get to the places that would make this film truly interesting. Rukh only commits a few murders before succumbing to guilt. This guilt leads him to throw himself out a window ending, for some reason, in a fiery ball of astro flame. Whatever. If I sound bored with the film, it is only because compared to the gems and classics of the same period The invisible Ray is plodding and destined to age awkwardly. Aside from being a decent sci fi film that could easily fit into the golden age of 50’s b movies, it lacks the central villain that made so many other films interesting. for as advanced as the film is in terms of speculative maturity, time has only dulled the horror that was once so sharp for the film. All in all, there is no true calamity in the Invisible Ray because having an Invisible Ray would be amazing. A proto superhero film would have been more interesting to watch as The Invisible Ray unsurprisingly recedes to the dark corners of time.