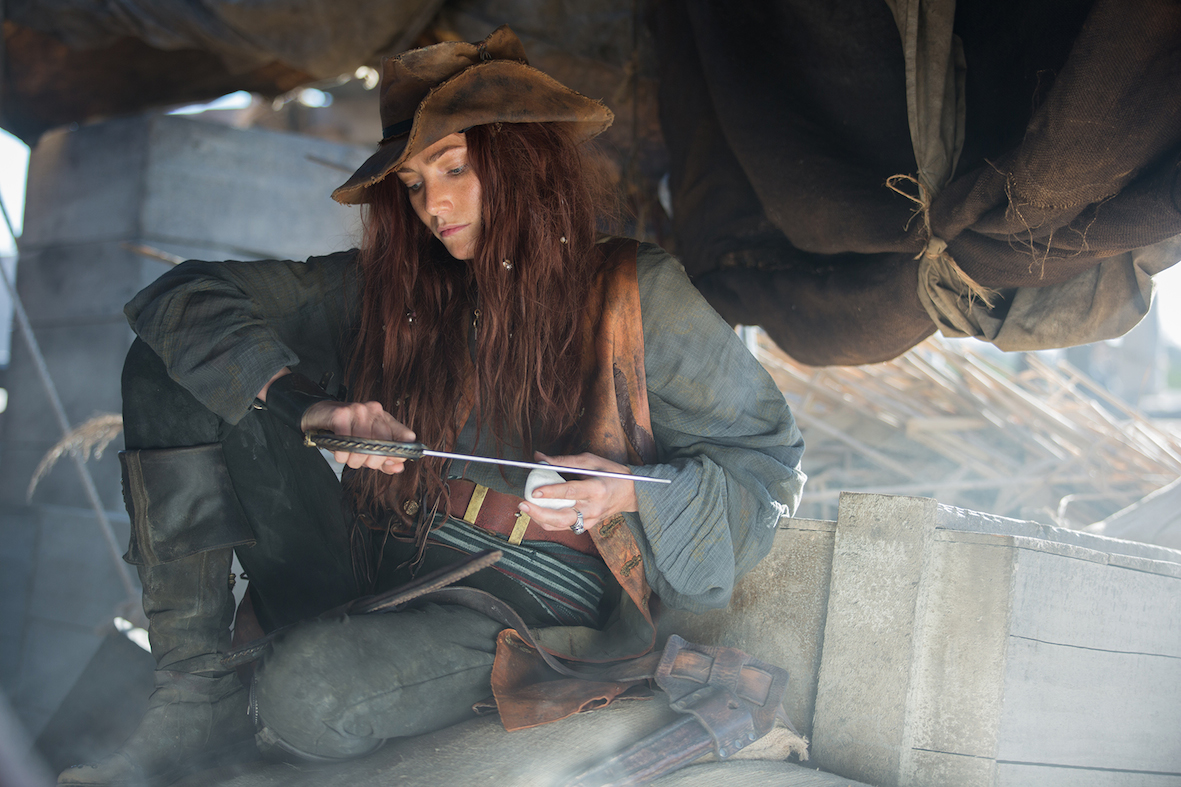 I feel I was a little harsh on the first episode of Starz new original series Black Sails. Most of my judgement was hinged on the difference of pulp versus reality and that Black Sails couldn’t decide on which shore to land. The rest of the series, however, may change as 55 minutes of television series is vastly different than 55 minutes of a film, and one of television’s strongest aspects is its ability to take its time establishing characters and developing familiarity. I feel Black Sails did not give its audience the credit they deserve when its first episode riddled the ground with hooks like caltrops. This is a new day, however, and the first part of the series should give adequate time to set plots gracefully in motion. Yep, no need to get excited and go overboard quite yet… oh look, lesbian nudity.

The subsequent episodes of Black Sails are based off the myriad of the established plot lines introduced in the first episode. As we remember, the rowdy group of buccaneers, lead by Captain Flint, are stationed on a Tortuga like island, New Providence, where schemes are hatched and more breasts are bared. The most important scheme, however, is the capture of a famed treasure galleon which, as made quite obvious, is important to everyone. Seriously, this treasure ship could mean the life and death of everyone involved including Elenor Guthrie, the pirate den mom, Charles Vane, captain of the rival evil pirates, and of course, Captain Flint, whose character has gone from heroic stalwart to someone I couldn’t really trust to even order me a drink at the bar. Land Ho! Aside from them looking like steampunk pirates, these two are surprisingly a fun to watch. I just wish it was them, and handful of others on a deserted island.

The mellowing of characters is perhaps the most interesting aspect of the continuing episodes of Black Sails. Though John Silver was propped up to be our protagonist, his weasel like character is too hamfisted to be a reliable narrative. Additionally, the badboy Captain Vane quickly proves to be a lovesick pussycat who really just pines after Guthrie. Flint dives into chaotic territory with only his first mates to help him. Guthrie goes from an unstable basketcase who has no business running trade operations to an unstable basketcase who has no business running trade operations with terrible taste in men…and women. See, dimension makes for great television. At the end of the day there are a few well rounded characters flanked by stereotypes and half baked cartoons. Also none of them have eye patches.

One problem looming over the first few episodes of Black Sails is a sort of situational comedy syndrome. It is true that all of these characters have reason for being in close proximity to each other, but the storylines become increasingly insular with only hints of interesting things in the periphery. The show has a problem with discarding useless but interesting characters and plunging back into torturous tedium. What’s that, a leper and opium addict colony on the beaches? Well I guess it’s time to go back to the same brothel we have seen before. Look at this interesting 17th century African adviser played by Hakeem Kae-Kazim. Well, that was nice, now back to bare chested pirates. The incestuous nature of the storylines homogenizes a world that is supposed to be filled with a myriad of personalities in an open expanse of a diverse world. I mean, there are more people here than just these roughnecks, right?

The crux of the early episodes takes place within a continuing love story between Flint and what turns out to be a royal duchess living in exile after a scandalous affair resulted in her husband’s suicide.This romance introduces a growing suspicion by Flints men regarding the captain’s motives. Additionally, Guthrie, for some reason, is securing cannons for Flint from a well to do captain by the name of Bryson. Bryson turns out to be our main antagonist, for now, after enslaving Mr. Scott, the African adviser when a deal goes sour with Guthrie’s father. You guys didn’t have to do that. We also have a complete drag of a storyline that includes Barlow, the disguised duchess, daddy Guthrie, and a pastor. Oh, Vane is down on his luck and on the skids with Guthrie, which has led his crew to abandoning him with his only option being to take over ownership of the brothel. Why? I do not know. It isn’t like there is an open world of commerce out there. Whatever. This orgy of confusion turns out to be more sane than the storyline revolving around Max, the town prostitute. One of the better television show openings since Game of Thrones. No joking, this sequence never gets old. then again, I love ivory decadence.

The first episode also sets Black Sails up for some nasty, violent scenes within the show. Pirates have historically been men of ill reputation, so violence against women should not be that much of a stretch. The fact that Pirates of the Caribbean danced around this issue is hilarious, but when it is seen put into place, it becomes uncomfortably boring. Max attempts to abscond with Guthrie but instead sort of gets double crossed. Well this double cross leads to a whole bunch of rape, which would make sense if it had any point to the plot. Max’s storyline begins the parade of nonsensical violence, which adds nothing to the story aside from a growing relation with Anne Bonny (aka anime girl). I already get squeamish with these sort of things, partially because they can be such deviations from the storyline when better writing would have been more effective. There is absolutely no reason for this rape narrative other than the fact it is cable television so why not. Black Sails sacrifices a potentially interesting storyline to an easy plot device, which does nothing but show these evil pirates are evil. Aside from all that we also have a cat almost being crushed by a boat careening onto the shore. No Mr. Whiskers run! Oh good only one human crushed.

I think it is important to note that, despite all my jokes, Black Sails has its fair share of strong points. The costumes, set design, and makeup (minus the highly groomed body hair) are more than capable of creating flavor. Each actor looks sun bleached and worn from years in the sun. Additionally, the shows producers are outstanding at creating gritty and realistic action sequences, in particular with Flint’s greenhorn accountant turning barbaric during a ship’s raid. I may even say the show makes traditional sailing and naval warfare interesting. Take these strong points and contrast them with a litany of drivel, including unengaging politics, needless characters, and dialogue that just mimes meaningful substance and you have the show. I feel I am getting emotional because after a few glimpses of solidarity within the narratives, Black Sails continues to veer off course with little hope for redemption. Maybe there will be more fighting in the end?