ALESTORM – Sunset On the Golden Age 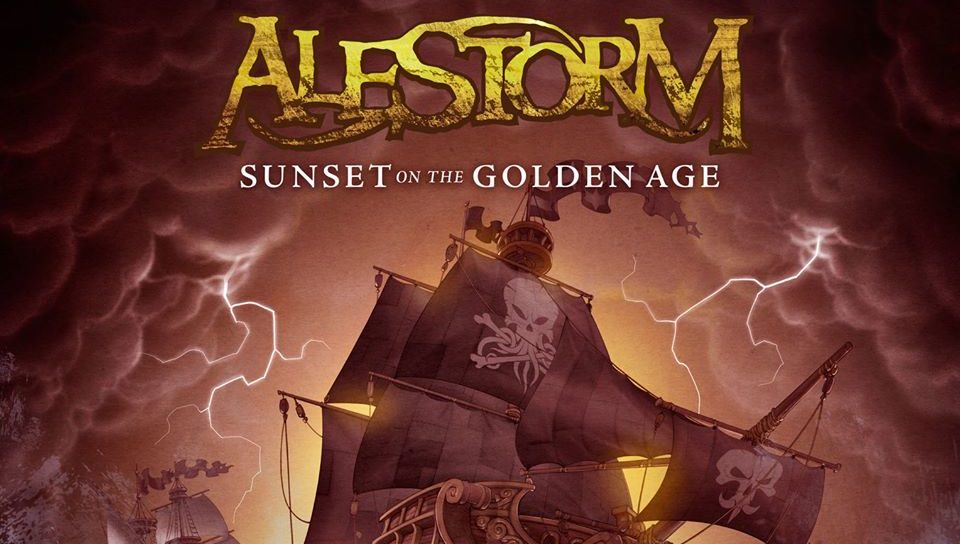 According to google, the record for circumnavigating the globe in a ship, alone, is 78 days. If you cut in a further 42 days for partying, rum breaks and general piratical tomfoolery, you might expect a team of four wandering villains to make the trip in 120 days.

I only bring this up because Scottish Pirate Folk Metal band Alestorm could have sailed around the world once for each song on their new album and then twice again in celebration between now and their last release.

You might remember it. It was 11 tracks of pure scoundrilicious nonsense with a sense of humour almost as powerful as the sea herself, ending with the perhaps strangely graceful and gradual death throes of a terrorsquid, a beast I imagine to be much like a normal squid, only bigger, angrier and more like “The watcher” from Lord of the Rings.

Suffice it to say, when I heard this album was finally coming out my first response was “YES!” and my second was, “Finally!” They took their sweet salty time about it.

Now it’s here though, by Davey’s tentacles has it been worth the wait. It feels almost like I’ve been one of those mopey women who used to hang out on cliffs for all eternity, except now my ship’s finally come in.

(And also, what happened to them? It’s not like handsome Johnny-can’t-swim ever came back from his storm-season jaunt into the West Indies. Are those sad suckers still there? Or did they finally realize that being a being of pure energy meant they could leave the cliff and go sodding looking?)

Honestly, it might be their best yet. Their focus is, as always, folk metal with a cheeky wink straight at the listener. These aren’t serious pirate songs, about getting gonorrhoea in a muddy port and having your teeth fall out because some fucker bought limes instead of lemons. This is music about traveling through time because you’ve drunk all the rum available to you, and Vikings might well have something more interesting to get you wrecked. Each and every song has its own energy, and all of it is a kind of glorious, gleeful rush.

And a cover of Taio Cruz. Seriously. On one hand, he seems alright. I’m not overly familiar but a quick bit of googling tells me he’s got a whole sack of awards for various pop-style rappastraphy. On the other hand, the same amount of googling tells me he thinks you is just spelt u, so that might tell you more about the state of British rap than him.

It’s not bad, though. That’s what I love about this whole album, actually. It’s brave enough to not mind looking silly. A statement that applies to the band as a whole. If you like Alestorm, you’ll love this. If you don’t though, it’s not going to convert you.

Also, what’s it like, suffering from a pre-natal lack of a sense of humour?