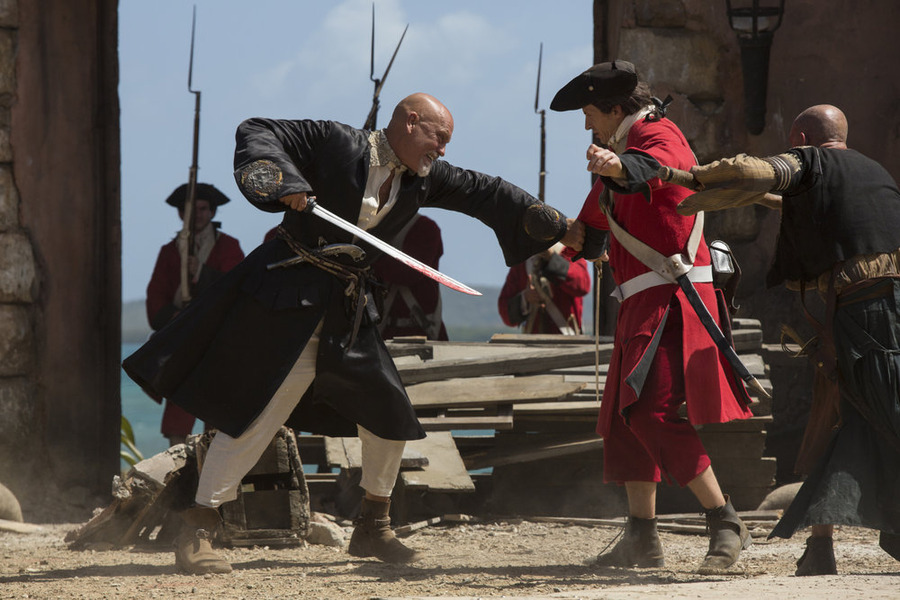 With Game of Thrones season 4 enjoying record viewing figures, it’s unsurprising that a litter of mediocre sort-of-historical dramas have been spawned for us to fawn over. NBC’s latest offering Crossbones is probably the most hotly anticipated of these, with slick trailers running since spring and promising something fresh for those of us tired of the ever-worsening Pirates of the Caribbean franchise and realising we’ve already heard every song Alestorm has ever written.

As a roguish, bearded British guy I’ve always had a fondness for the era of piracy and this show had my interest right from the start. It begins with a voiceover ripped straight out of a History Channel special (back when that meant something), and tries to set the series up as a realistic drama about life on the high seas.

This illusion of credibility is sustained for about fifteen seconds and shattered with the arrival of motherfucking superspy doctor protagonist Tom Lowe (played by Richard Coyle). The writers of this show have mashed together elements of Indiana Jones, Sherlock Holmes and James Bond and come up with a character so painfully uncharismatic it’s a struggle to watch.

I like to think of him as “Hovel O Seven” and I welcome you to do the same. The speed with which this asshole destroys crown-secrets, you’d think he was working for the french.

His mission is to transport the potentially-a-real-thing-but-who-gives-a-shit (and-yes-I-did-just-hyphenate-a-whole-sentence) chronometer from the Caribbean back into the clutches of the morally dubious British Empire, and maybe also kill Blackbeard (played by John Malkovich) along the way, even though he’s been presumed dead for a few years.

The story, while in no way innovative, is fine. I understand the need to kill Blackbeard. History tells us he was a murderous bastard who stank of dog shit (although either this show has no regard for historical accuracy or the whores in The Bahamas can’t get enough of the stink of dog shit). The problem with the show, really, is that it is trying to be far cleverer than it actually is.

For a start, Mr Lowe is under cover as a ship’s surgeon. He’s also apparently incapable of telling a flayed corpse from a wax replica, which you’d think would be a pretty big give-away if you were pretending to be a doctor. It makes you wonder why they sent him at all. I mean, there are two missions going on here, and since Double Lowe Seven’s reaction to coming into contact with Blackbeard is to smash the chronometer and murder the inventor, I think maybe he might not have been the man for the job. There’s something about seeing the globes of a man in a bathrobe that will always make me uncomfortable.

It just doesn’t make any fucking sense. Either they expected Blackbeard to take the ship, in which case why put all the chronometer eggs in one basket, or they didn’t in which case, why put the ship in the hands of a cannon as loose as a scurvy-ridden bowel? This is the British fucking Empire, after all. With the introduction it’s given, they should be able to send a hundred fucking galleys to deal with both problems, and still have enough to torture whole continents for shiny shit and cotton.

Ideally, you should see Crossbones yourself. And I mean that. The list of absurdities is endless. Illiterate pirates talk like Elizabethan courtiers. Single-shot pistols magically reload shot after shot. Blackbeard’s beard is fucking white. But, for all that, it’s actually pretty entertaining.

Malkovich, predictably, acts Shakespearean circles round the rest of the cast. His performance is so suitably charismatic and batshit crazy you’ll start to forgive the terrible CGI and cast of lacklustre supporting characters. And the more I think about it, maybe my dislike about how dumb the main character is are unfounded. Maybe he’s meant to be a fucking moron?

No matter how hard it tries it’s not Game of Thrones but it’s funny to watch it try to be, and it’s got the decency to fuck up interestingly, at least.

(Originally I planned to come back to this series at it’s end to provide a little retrospective. Unfortunately, at around the half way mark i found the whole sorry thing unwatchable and, if the shows cancellation is any indication, i’m not the only one.

Despite failing to be successful, we’re still gladd NBC had the cannonballs to bring more pirates to television. If you, like me, found yourself wishing this was something more tolerable, I recommend you check out “Black Sails” for a far more seaworthy alternative)