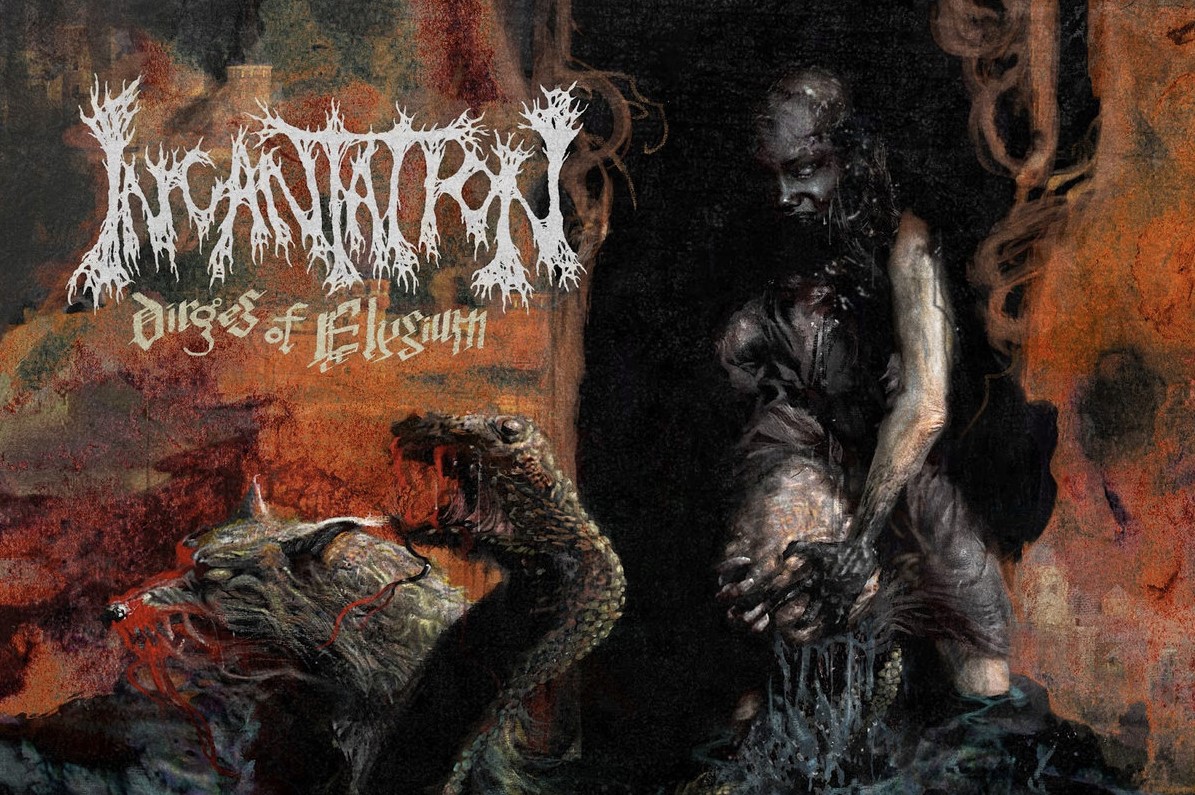 First of all, I need to ask you to take a look at the cover of this album. Not just glance at it, but take a good long fucking look. Pull that shit up full screen if you can, but only if there’s nobody with a weak heart behind you.

If you’ve fully absorbed that album cover, you already know what this band’s going for, and I’m just here to let you know that yes, they succeed. Go forth and suckle at the pustulent nipple of black metal. And know that it is good.

(if for whatever reason you’ve ignored my advice and kept reading, the cover in question is a heavily pregnant undead woman leaning into a world of fiery skies from her perch in the night realm and birthing a two-headed serpent and wolf monstrosity into a sea of drowning children.)

That’s what this album is. It’s also the most beautiful and grotesque Incantation cover to date, which itself is a fucking achievement.

Usually I wouldn’t waste time talking about album covers like this, but If you’re into death metal you know who Incantation are. There’s no excuse. These guys have 22 years of unremitting, ferociously powerful death metal behind them and have consistently discarded former band members like the skin of a serpent, growing bigger and fiercer each time. (And let’s not forget that one of them was fucking Ronnie Deo. After a band proves it doesn’t need the inventor of the fucking horned salute, I’ve got to wonder if there’s anything they couldn’t endure.)

(Because surely there’s only one Ronnie Deo, right?)

Seriously, there’s nothing that stops these guys.

Dirges of Elysium, I should point out now, is a ferocious album. Immediately it begins with some fantastically carnal descending harmony, a grand and layered instrumental piece that collects and discards simplicity while leading gently into the second song in the manner of the rotting corpse of a tongueless butler taking your coat and hat and showing you to the viewing room, wherein lies the bloated corpse of Cronus.

And then the tempo shifts, gutteral growling starts, and the real album begins. And it’s precisely to form. Despite the slow intro there’s some really speed and shifts of tempo here, and it’s all so brilliantly put together that it’s kind of difficult to discuss properly. It feels like such a goddamn copout to say, but this was an album that I expected to be fantastic, a great and thunderous black metal dirge and that’s precisely what is has delivered. An obvious standout is “from a glaciate womb” which combines thunder and grim, gutteral growling with apocalyptically heavy riffing to make one of the most impactful songs I’ve heard in a long time.

Like an undead mammoth thawing in the arctic and just, just fucking up a group of unwary polar explorers.