Dungeons and Dragons – Art and Arcana: A Visual History 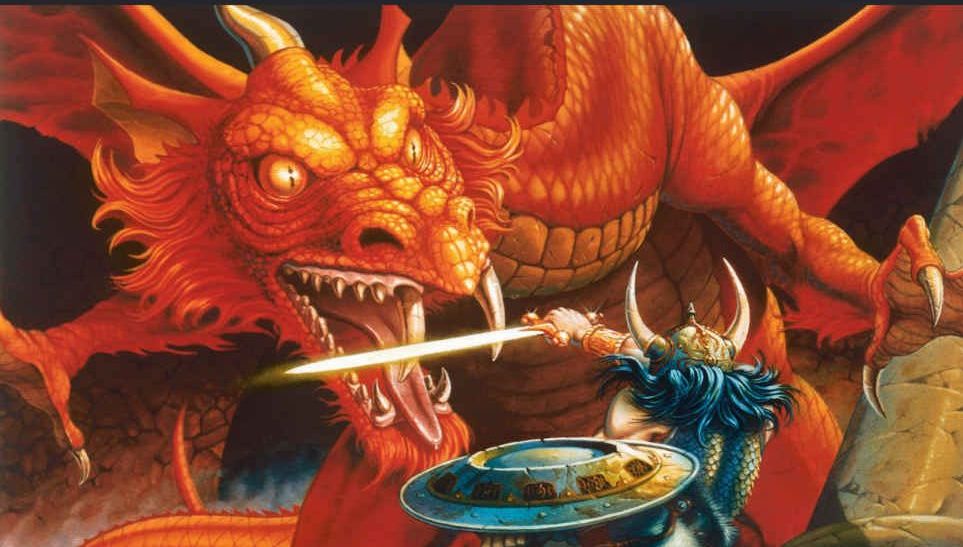 ”If you thought that was cool, wait till you try the real thing.”

A friend told me something to that effect in the schoolyard one day in 1984. My eleven-year-old mind was still reeling with excitement from having spent most of my weekend engrossed in The Warlock of Firetop Mountain, a book unlike any I had ever read before. The Fighting Fantasy gamebook by Steve Jackson and Ian Livingstone had totally swept me up and pulled me in to a magical domain of excitement and peril akin to the wondrous worlds of J.R.R. Tolkien and C.S. Lewis that I knew and loved, but made even more intense and visceral by the choose-your-own-adventure concept. To think that there could be something even cooler waiting for me to discover seemed impossible. 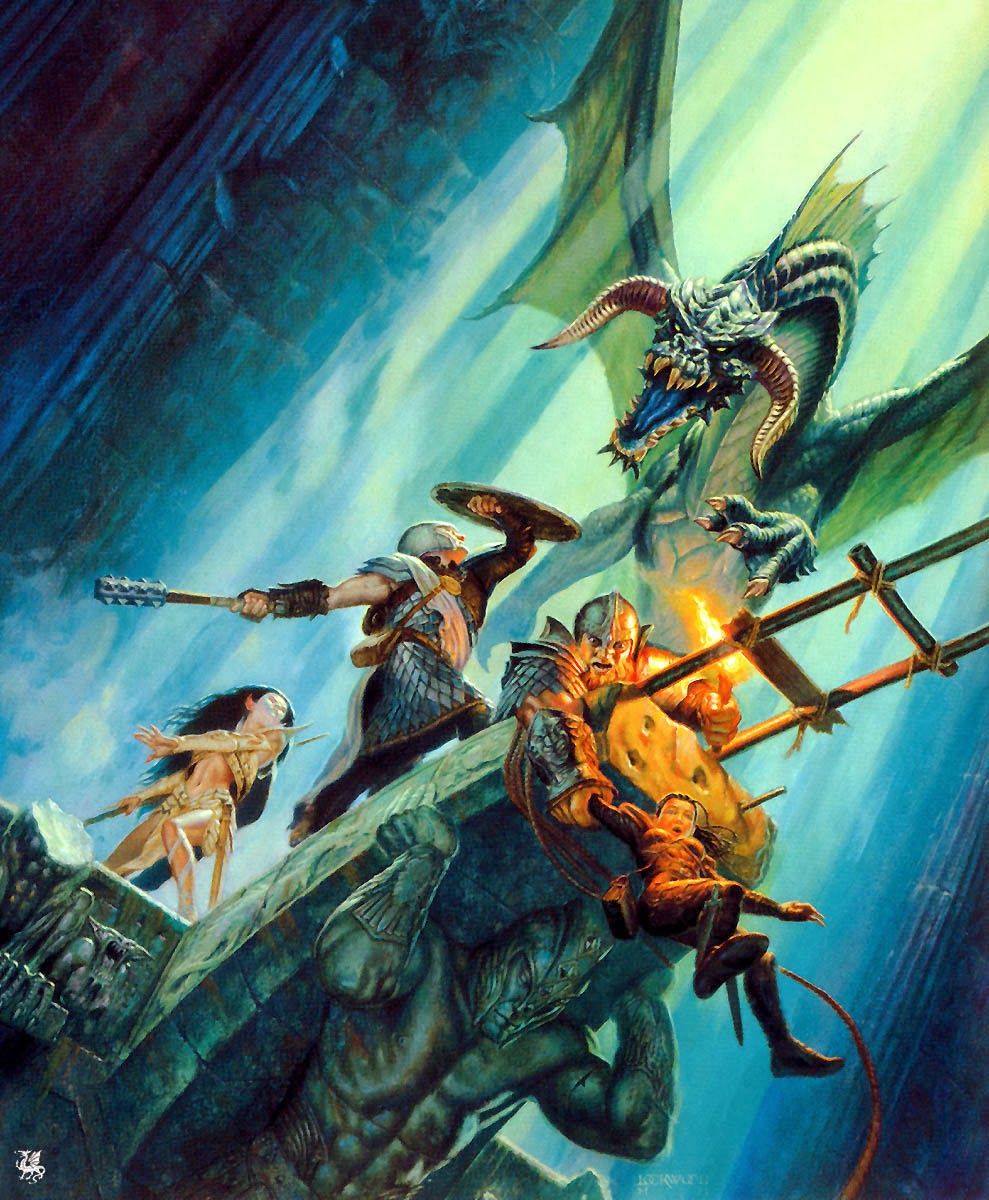 But in the world of Dungeons & Dragons nothing was impossible. And for the next few years my fellow adventurers and I regularly set out on quests to hoard treasure in ancient tombs, vanquish evil in monster-infested castles, and conquer an ever-expanding realm of sword and sorcery born of our collective imagination. But all good things come to an end, and with the onset of adolescence I became preoccupied with other things and left roleplaying games behind – although I never lost my fascination with the fantastical.

Thirty years later I find myself engrossed in another book that transports me right back to those days of character sheets, oddly shaped dice, and wide-eyed wonder. Dungeons and Dragons – Art and Arcana: A Visual History is a richly illustrated retrospective on the franchise that went from a home-made set of tabletop wargaming rules to a global phenomenon and is still an enduring pop culture brand.

In true (A)D&D fashion, Art and Arcana is a hefty large-format hardcover tome of nigh on 50 pages packed with illustrations and information. The cover instantly grabs your attention with Larry Elmore’s majestic red dragon originally emblazoning the 1980s D&D Basic Set jumping out at you. The piece is as vibrant as ever, and I’m sure it was chosen to grace the cover in a blatant attempt to roll a critical nostalgia hit on old dudes like me. If so, it worked like a charm. 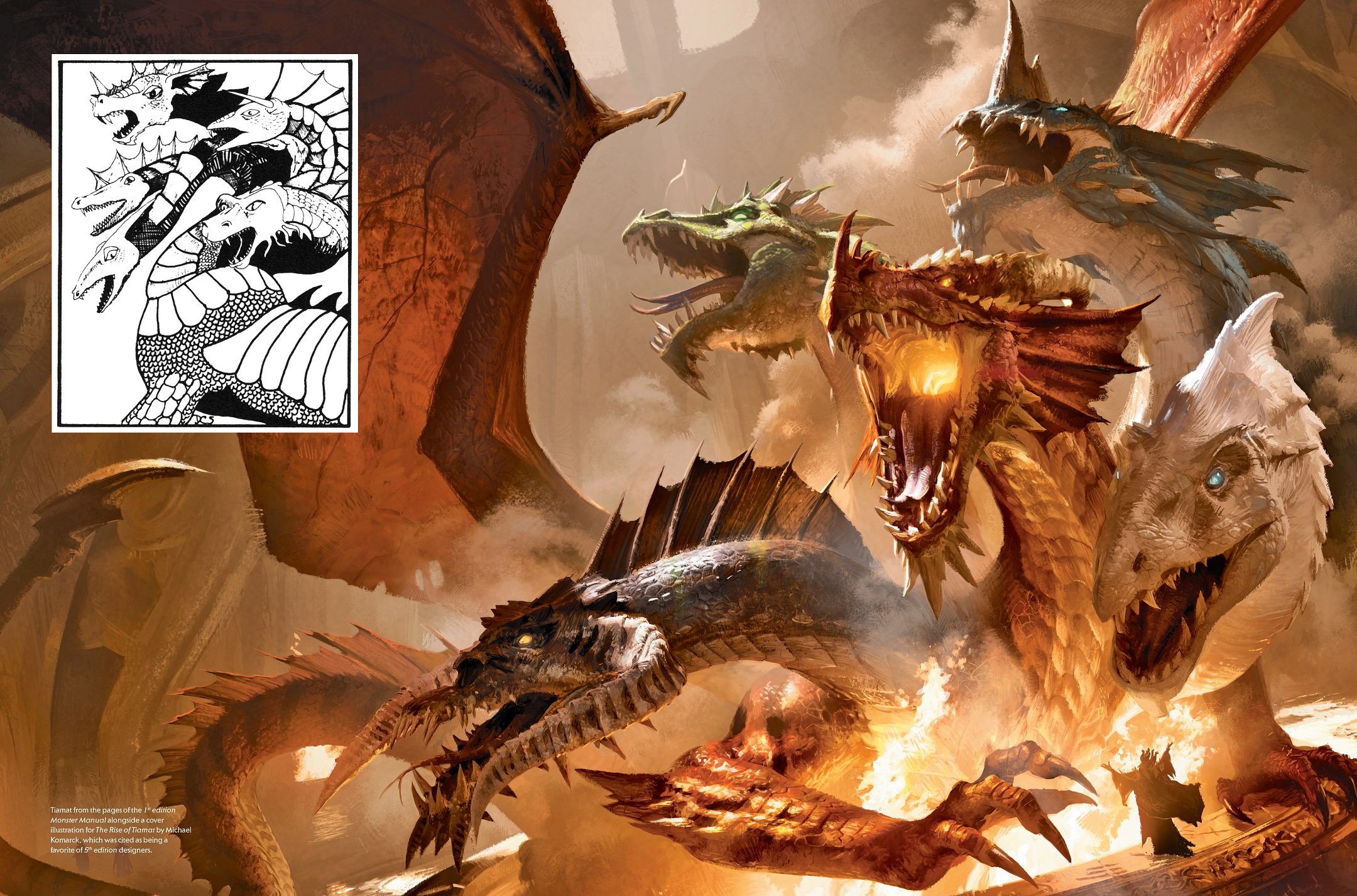 Given the insane amounts of artwork that have been produced for the game over the years, this collection is by no means exhaustive, but it’s quite enough to make your head spin. The book contains 700+ pieces of art from the earliest sketches of wicked witches and wily wyverns produced by eager amateurs in the 1970s to masterful visions of flame-spitting fiends and fully-fledged fantasy worlds painted by professional artists. All art is faithfully reproduced on high-quality glossy paper making the book very easy on the eye. Special attention is given to showing the visual evolution of iconic creatures like the mindflayer, Demogorgon, demon queen Lolth, the beholder, fan favorite Drizzt Do’Urden and many more through the ages. Besides the actual art, readers are introduced to or reminded of the many spin-off products that the increasing popularity of the game warranted, including video games, a children’s TV show, novels, coloring books, candy, and much more. I’m not sure who really needed a dungeon-themed beach towel or even View-Master reels, but presumably there was a market for that stuff. Nowadays, I’m sure it fetches through-the-roof prices on eBay. 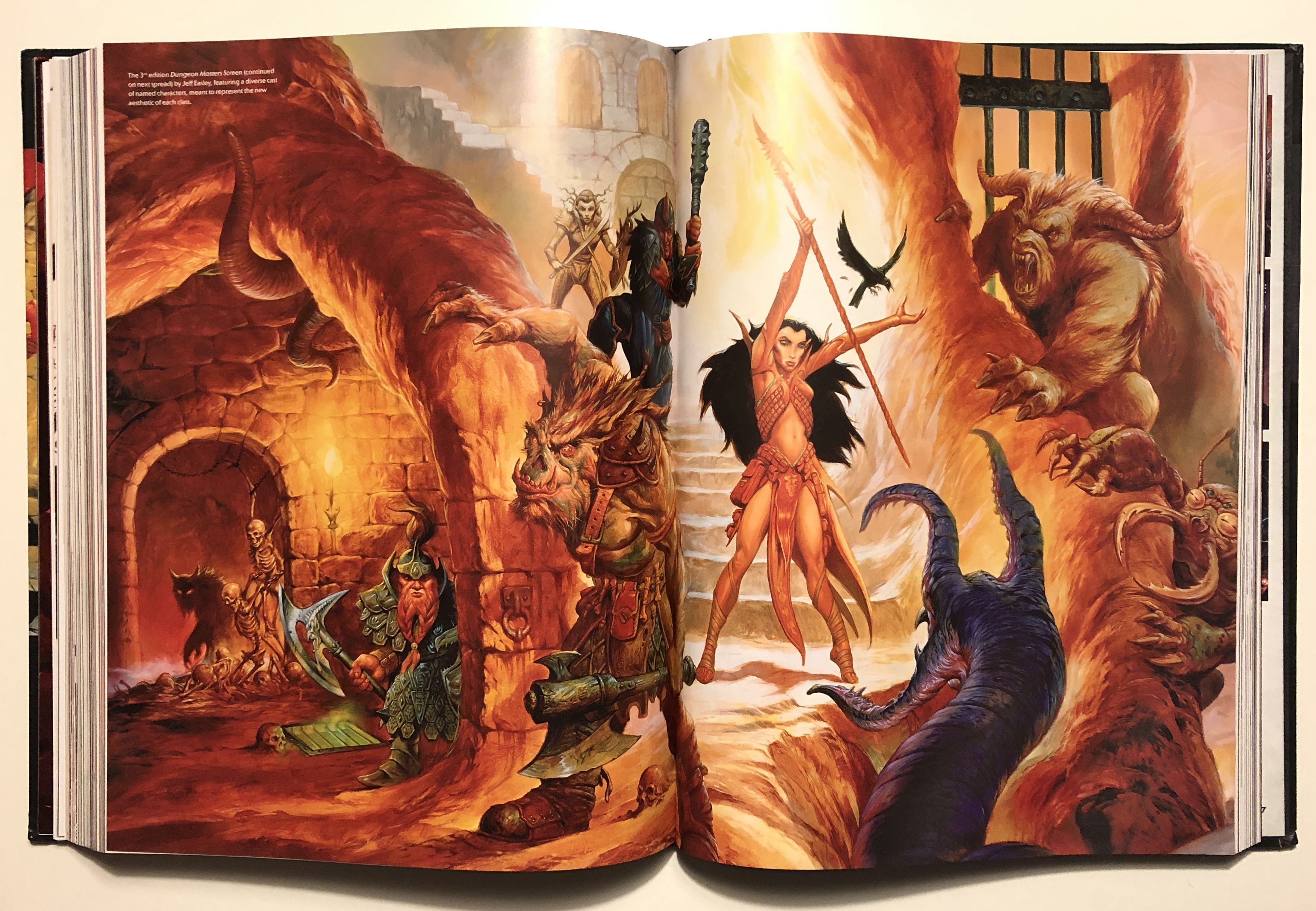 For the Arcana part of the title, the book chronicles the entire history of the D&D franchise in great detail. The authors cover its humble beginnings among wargame enthusiasts in the 70s, the wild-fire roleplaying game craze that swept the world in the 80s and made the TSR company an entertainment juggernaut, the subsequent backlash from Christian circles accusing the game of promoting Satanism and provoking suicide, murder and even critical thinking(!), the inevitable overexpansion and decline leading to the ouster of the game’s creator and geek world overlord Gary Gygax, as well as the 1997 takeover by the young upstarts from Wizards of the Coast (Magic: The Gathering, anyone?) and well beyond all the way up to today. We also get a look at the thoughts and strategies that went into shaping and revamping the different game editions and other related products. It’s a great read for fans wanting an in-depth look behind the scenes, but casual readers may prefer to just skim it and look at the pretty pictures.

I can’t recommend this book enough. It is a treasure trove of beautiful, evocative fantasy art that sends the mind racing off on adventure. If, like me, you’ve ever had love for D&D, be it a fleeting romance or a life-long passion, Art and Arcana will remind you just how fierce the fires of imagination can be. As fierce as a dragon lurking in a dungeon…