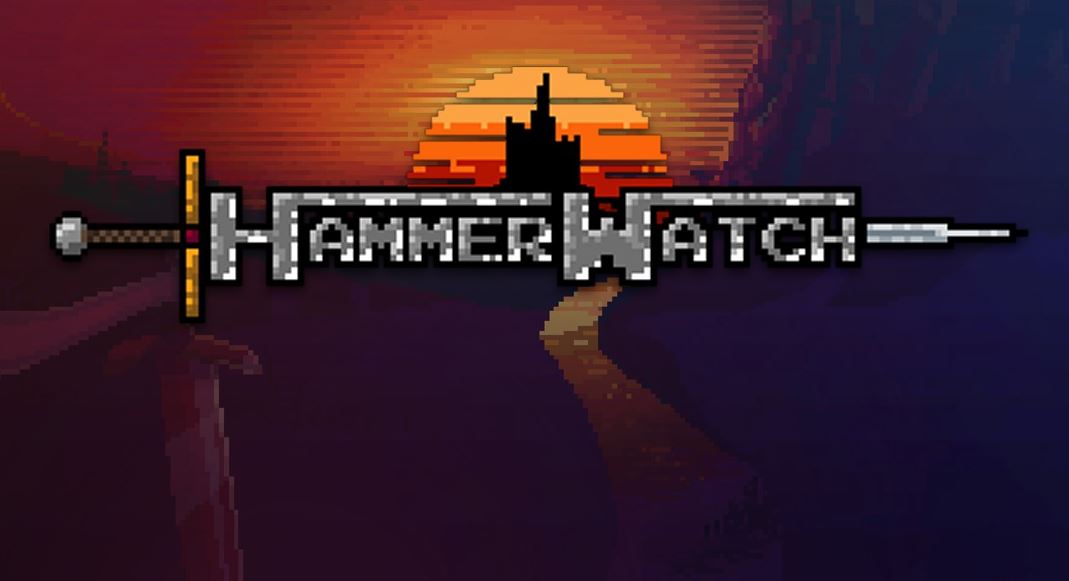 Hammers, with few exceptions, aren’t that visually interesting. Sure, you’ll get oddities . Mjonir probably had some pretty interesting runes. And it’s hard to fault the pure functionality of the common sledgehammer, but you wouldn’t stop to just look at one. These were my thoughts when I booted up Hammerwatch for the first time. To tell you the truth, I was having a hard time gearing up to enjoy a videogame about monitoring tools until it turned out, quite predictably, that that wasn’t what this one was about. There was still a tool, of course, it was just me.

As it turns out, Hammerwatch is a top down class based dungeon crawler. It’s also the castle’s name, apparently. Those maggots get pretty fucking serious later on.

What you’ll do next depends on your character. There are four choices; paladin, mage, warlock and ranger. They’re all pretty interestingly balanced. Paladin and Mage being pretty close combat oriented, though all the Mages attacks have a little range to them, things still get uncomfortably close. The Warlock’s spell is a pretty effective mid range thunder ball, but you can’t use it too often so you’ll need to resort to just whacking things with your sword on occasion. And the ranger’s got a bow and a bomb, which means he’s best suited to winding up the crawling hordes from a distance, then dropping a bomb and running when they get close.

At this point, it should be pretty clear that this is designed as a multiplayer game. It’s a pretty fantastic multiplayer game though, if you’ve got the friends to play it with. Each of the characters strengths and weaknesses balance out and it’s got one of most flexible multiplayer components I’ve seen since the 90’s. Of course, for that to work you’re going to need some real world friends who have similar schedules as you, and since I game mostly at 4 in the morning my journey was a lonely road. This isn’t the games fault, there’s every possible configuration you can imagine. There’s online, Lan and the rare and almost forgotten local co-op. In that way, at least, it outperforms a most of the biggest and best games on the market. Simply because you can play it, not with a friend in vietnam, but the guy sat on your couch next to you. Not many modern games can say that.

Right now I might be giving the impression that this is a modern game, and I really shouldn’t be. It’s a new game, that’s for sure, but it’s really far from modern. That’s not negative either. While sometimes it seems rather dated it wears it’s nostalgic tendencies like armour. It’s the kind of nostalgia that makes you want to boot up the PS2 and fuck around, not thank your deity of choice that games have invented the circle. Living Skeletons are like termites; they breed like fuck in old houses and they make you wish you knew worse swearwords

Specifically, it makes you want to boot up your PS2 and play “Gauntlet; Dark Legacy”. That was a class based top down arcade game from the 90’s that grew, as they often do, into a game for the PS2. I bring it up, not because it’s a previous title of this developer, but because I’m fully willing to bet it’s received some pretty heavy playtime by the developers over the years. Sometimes it feels more like a stripped down remake than a game in it’s own right, and that’s in no way a bad thing. It fixes a lot of gauntlets problems while being significantly easier to pick up and play than it’s wayward godfather. Which is to say the mechanics seem much simpler. Ironically, at least solo, it’s much much more difficult to actually succeed at. I might be remembering it wrong, it’s been a couple of years since I played it, but I think I might have had more difficulty conquering the giant pulsating god maggot in this game than I ever did in the original gauntlet. The ps2 version, not the arcade game. That was damn impossible.

As a result I’ve not got as far as I’d like, but despite my concerns about enemy variation (the bat/maggot/beetle combo lasted much longer than my interest in slaughtering them did) the dungeon’s got plenty of shit to explore. There’s a level editor too, so if the community picks it up, there’s going to be essentially infinite maps pretty soon.

Theres also a “survival” mode, which I assume was horde but am too much of a coward to check. There’s a lot of shit to get done, and secrets galore, as is apparently mandatory for any European building over 600 years old.

Since I’ve started writing this review I’ve been thinking about gauntlet a lot, actually, and I’ve just gone looking for it on Ebay. It’s selling for about $10. I don’t think I can give this game a better recommendation than that, really. If you’re one of the billion or so people who enjoyed gauntlet, or you think the idea of a multiplayer hack and slash dungeon crawler sounds awesome, this one is new, built with full modern multiplayer support, and is still cheaper than a second hand copy of the original. And it’s got infinite content.

Just remember, burn the nest. It’s the only way to be sure.