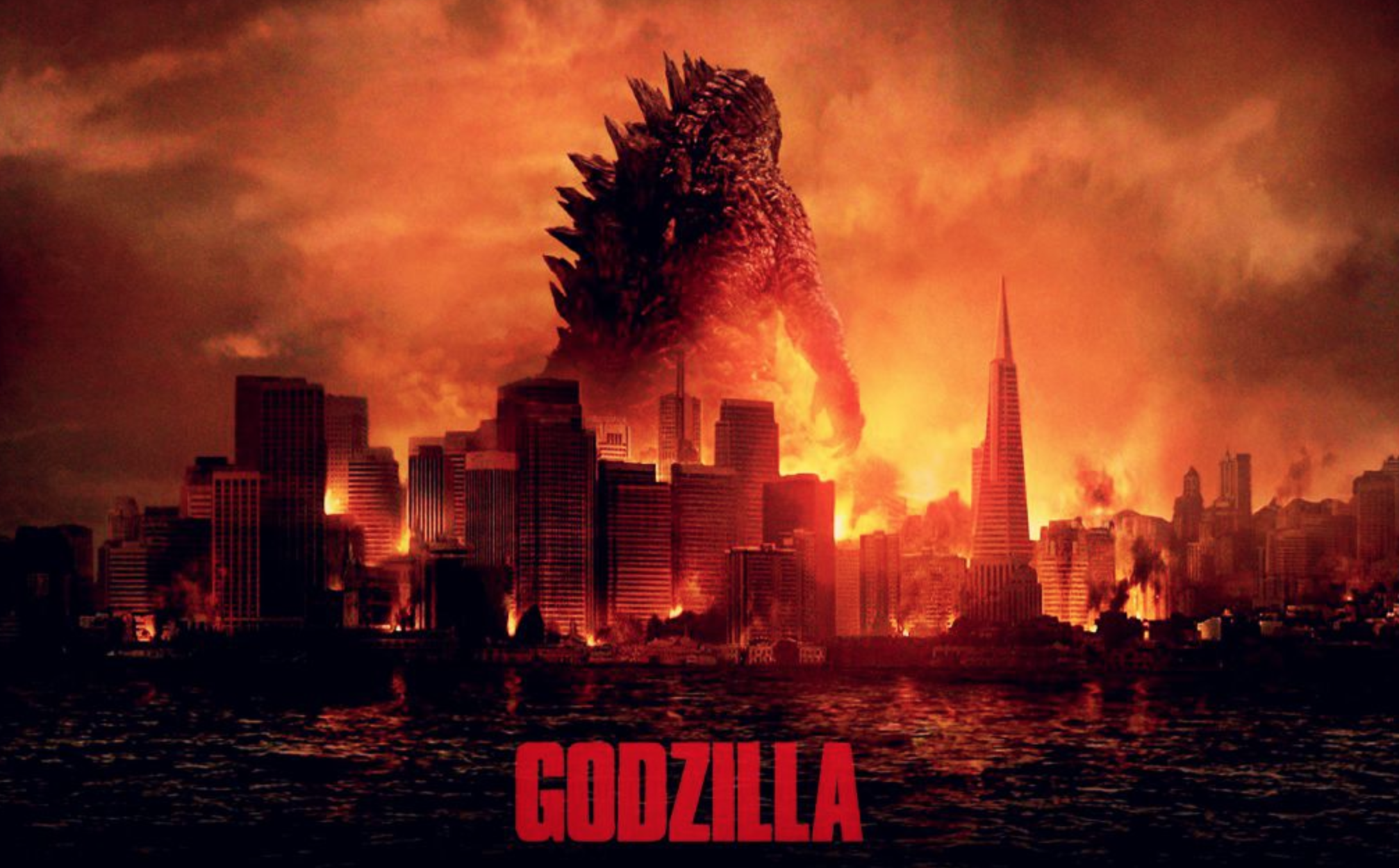 YES! There is nothing that gets me more excited than gigantic monsters throwing each other into buildings while shooting radioactive beams in each others face. Since the early 1950’s, the Japanese Kaiju industry has been a source of entertainment using the absurdity of colossal monsters fighting over miniature cities as an allegory to nuclear terror. Godzilla, and the host of monsters from Toho Co., have been the center of both tributes and really terrible reboots. Spoiler warning: I will be discussing the new Godzilla film and important plot details. You have been warned.

Godzilla, or Gojira, was a 1954 monster movie centered around a gigantic lizard creature shaped by nuclear mutation. The monster destroys cities with his a gargantuan size much like King Kong did a few decades earlier in America. While King Kong was about finding a savage beast in a savage world, Godzilla has always been centered around a radioactive theme and the product of technological negligence, thus casting him as a monster born out of scientific arrogance. Despite the sobering shades of the film, Godzilla, along with Toho Co., produced a line of films and toys that kept upping the ante and seeing Japan and other cities get torn to the ground over and over. The films not only gave us Godzilla but Rodan, Mothra, Mechagodzilla, and the three headed badass Ghidorah. Godzilla has also been the center of attempted reboots to capture a movie magic that consumed the world a half century ago. We really do not have to talk about the 1998 film. Let’s just move on.

So who ever is in charge of the screencaps for this movie is doing a great job as I can find no clear shots of the MUTOs. Please allow this blurry picture to suffice for information. Why are we still inside office buildings when there are monsters outside?

The 2014 Godzilla reboot was advertised as grandiose return to excitement that was sort of spoiled in 1998. The new film had Gareth Edwards directing his first large production film after his 2010 independent release Monsters. Godzilla also had a damn impressive trailer that included free falling skydivers descending into a ruined city to the backdrop of music sounding like it was from the ending of 2001: A Space Odyssey. This was the chance for us to have a really good, large scale, well produced kaiju film that people could respect. This would contrast the very fun but nowhere near as serious Pacific Rim. All we needed to do was have monsters fighting, thin threads of a back story, and dozens of references to monsters in possible sequels.

Godzilla starts out strong, at least in the credits, with creative footage centering around the nuclear tests that would eventually play a part in Godzilla’s birth. The new film sidesteps the whole “being at fault since we are playing with uranium” bit and casts humans as innocent bystanders to serious shit that has been happening for eons. We are given an American family to focus on played by Bryan Cranston, a nervous nuclear plant manager, his very talented but underutilized wife, Juliette Binoche, and his son, aka GI Joe, Aaron Taylor-Johnson. Do not get too comfortable with 2/3rds of those actors/characters because a seismic disturbance rocks the nuclear plant, causing it to demolish and leave the whole town in nuclear fallout.

Thus far Godzilla is alright. What is continued however is long plodding character development involving Lieutenant Ford Brody, the now grown up son, during a military leave where he tries to balance his young family (wife and son) and his father, Joe Brody, who is still distraught decades later from the death of his wife. Spoiler. This whole ordeal leads us back to Japan where Joe Brody literally has a cliche apartment filled with newspaper clipping and yarn to mark possible connections. Really? Really? Your wife is dead. Why cut out a single headline to pin up? You couldn’t possibly write down or file this shit neatly away? Why does every obsessed character have to also have a visually intriguing apartment? So this whole straight from a paperback mystery plot leads us back to the Brody’s original home where they find Godzilla. Dun Dun Dun. Wait. Not Godzilla. Something else.

Here we meet the very awesome Ken Watanabe playing a gloom stricken Dr. Serizawa, who is nurturing a baby kaiju that caused the plant’s destruction decades earlier. This kaiju is called a MUTO (which is an acronym but sounds cooler just as it is) and has the power of electrical pulses that sound very much like a Michael Bay movie trailer. WOOOOM WOOOM WOOM. Things go wrong, the MUTO escapes, and it’s finally time to fight. Go! Go! Wait. Why not? Come on. Governments have been keeping these giant prehistoric monsters a secret (surprise, surprise), or at least trying really hard to forget them, but the cat is out of the bag, gentlemen. Time to fight now? Come the fuck on. Was this is in the new film? No. Would it have been awesome if it was? Of course. If you ever get tired of character development just focus your attention on the slime monster named Hedorah.

I would like to state that I do not think I am particularly juvenile in my tastes, though I do demand a certain level of monsters fucking things up in a goddamn kaiju movie. Godzilla, the movie, takes its time and plays with monster fight teases throughout the entire film. Monster time? Nope, sort of dark. Monster time? Nope, just a quick snippet on a background tv. Monster time? Nope, let’s cut back to the humans. Fuck. I wouldn’t be so upset if Joe Brody, his nurse wife, or their clueless son had any redeeming qualities. Qualities like the ability to throw giant turtles into skyscrapers. No? Fuck you then and sit down. From what I can gather, none of these characters know how to do much aside from the GI Brody, who has the ability to hop onto any military mission because he is a bomb expert. Hey, you know we do have lots of rules in this operation but you look like you just need to get home to see your wife. Sure, hop on in the truck.

I do not want to state the move lacked giant monsters causing death and destruction on a massive scale. Godzilla does give us fighting, but by the time all pretenses are cut, the film does not really know what to do. You know what you do? Go to a new city, and repeat that again and again until you run out of them. Then, you know what you do? You fight in space. Godzilla is fighting the now two MUTOs in a now ravaged San Francisco over a bomb the military thought would be a good idea to use against a monster that fucking eats bombs for breakfast. Seriously. I am not making that up. He was eating a sub bomb a few scenes earlier. Now there is a bomb in the middle of San Francisco and oh no more people are going to die on top of the millions already under glass and rubble. So the bomb expert has to go in an de-bomb this bomb before everything…including the monsters…are destroyed. What is the proper protocol for a kaiju loose in the country? I am pretty sure it is not this.

Spoiler alert, Lieutenant Brody averts the crisis, but not without some help from Godzilla, who in the end is sort of the anti hero. “Hero” in the sense that he is not the dubstep whomping monsters that eat bombs and crap out evil and “anti” in the fact he just smashed a goddamn city. For this act of smashing the shit out of everything he was given sort of a slow clap by the human race as he slunk back into the water. Go get em ‘zilla. You just saved the town, how can we ever thank you!

I think Pacific Rim gave us the Kaiju movie we wanted and Godzilla was suppose to be the one we deserved. In an effort to make this a legitimate movie about monsters fighting over fake towns, the filmmaker forgets about what made that thing I just said awesome. They also forgot how to make a decent story. Where as Cloverfield had monsters as a backdrop to human drama and survival, Godzilla seems to be caught in between a 7 year old smashing boxes in his backyard and something that is way less fucking fun than that.