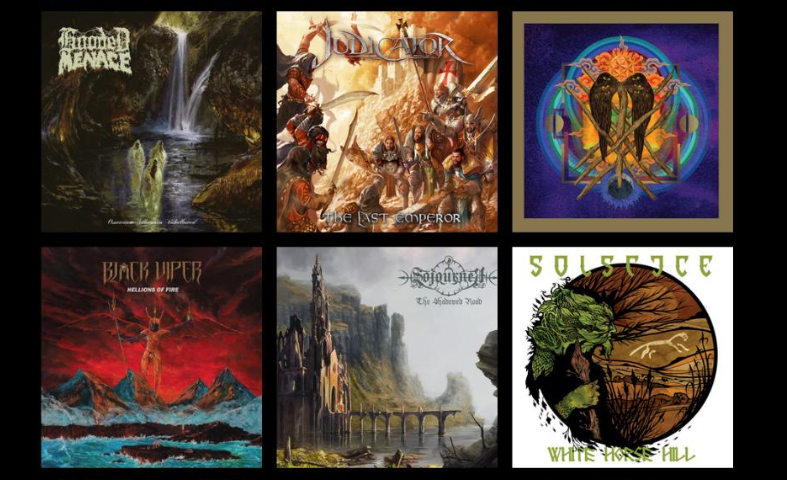 End of the year time is always strange regarding lists as there are so many. There are of course lists which I make for Tape Wyrm which focuses on lesser known black and death I find in the sewers. There are also power and heavy metal records I write for this site. Then there are favorite albums which I found myself listening to in 2018. This is that list. They are a mix between records I found important, enjoyable, and sometimes a mix between the two. These are the albums I found myself paying again and again if at least because they were some of the more popular metal records in 2018. When I look back on the year, these are the records which will remind me of the time. I present them in a big image and then with small thoughts at the close of 2018. 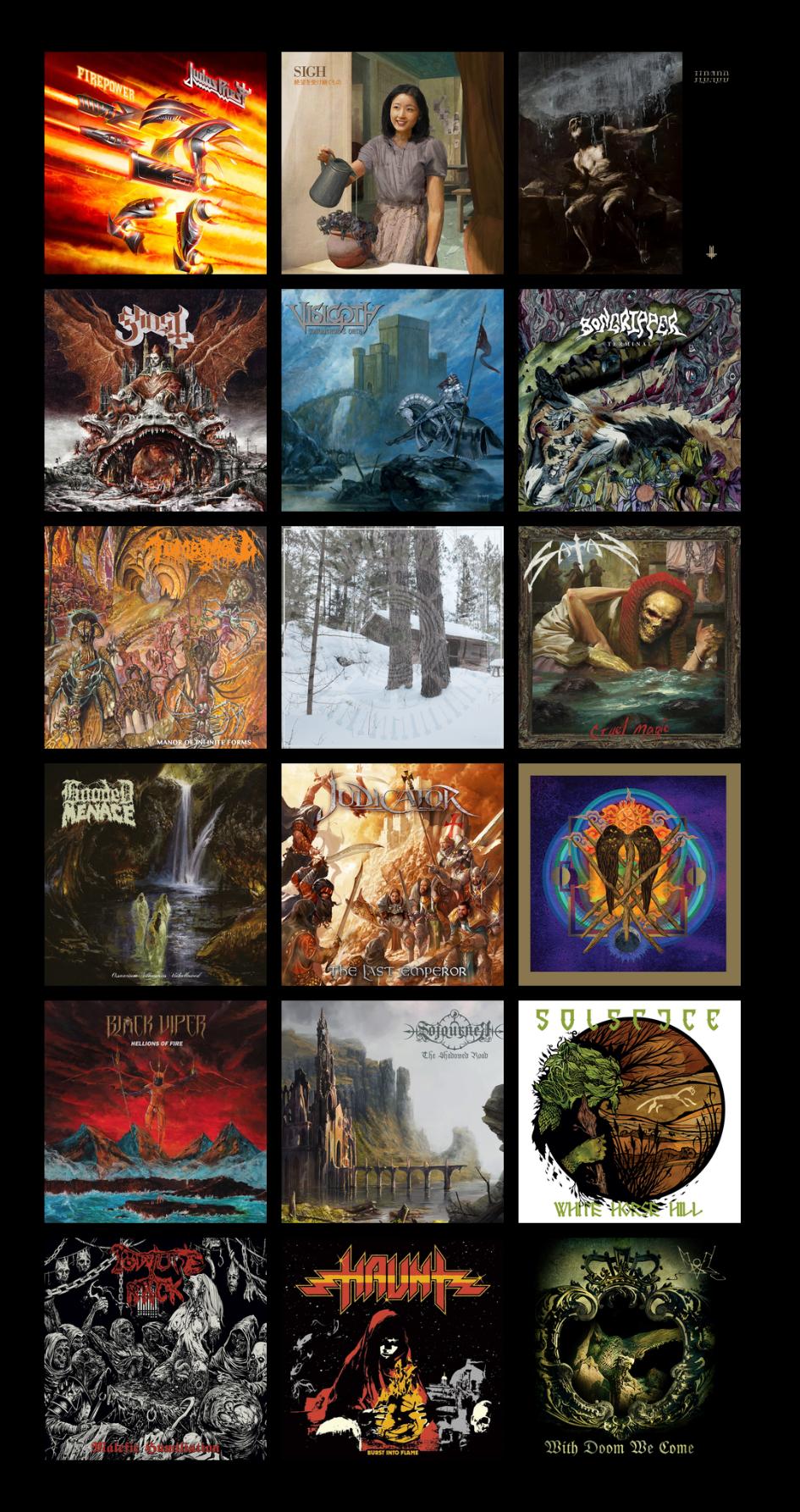 Judas Priest – Firepower: I have always had choice words for legacy acts and in fact, previous Judas Priest records have fallen under heavy scrutiny for being lackluster compared to newer acts. I don’t give a shit if it is one of the biggest bands in history, they don’t get any sort of special treatment or get to cut the line at the end of the year. With all of that judgmental nonsense out of the way, Firepower is here to remind me that Priest can make a great record which sounds 30 years younger and can stay up with all of the other bands way past its bedtime.

Sigh – Heir to Despair : I have loved Sigh since I got into metal and followed their weird trajectory from off beat black metal into nightmarish carnival barkers. Heir to Despair brings us back under the strange tent for the band following other records which were weird just not like this. This isn’t really black metal or anything that you are expecting, it is just the main attraction for a show you never knew you needed.

Behemoth – I Loved You At Your Darkest : I want to say this is one of Behemoths dumbest album titles but then again The Satanist was kinda edgy. In fact, this whole band rides that line of blasphemous edge that would be cheesy and laughable if not backed by a dynamic swirl of madness. for all of its taboo imagery, Behemoth is a band that mixes black and death into something that is engaging no matter where you are in your rebellious years.

Ghost – Prequelle : I have been following Ghost since their first album and have been laughing at every turn. This is due to the fact they started as an occult hard rock band and have skirted the line between hard rock and definitely not metal for many years despite being allowed to come onto end of the year lists like this one. This isn’t metal but it is okay since the use of devilish imagery combined with 80’s fanfare makes it something between Blue Oyster Cult and a satanic Genesis.

Visigoth – Conquerors Oath: 2016 saw a big album by Etenral Champion. I am not here to compare the two outside the crossover similarities between fans of heavy metal and people who never knew this type of music was still being made. Conqueror’s Oath has a bigger potential to be shocking due to its love for harmonic gang vocals which sound like a melodious group of vagabonds. Traditional metal is still in full swing with some great releases and Visigoth being somewhere near the top.

Bongripper – Terminal: I want to point out that this inclusion of stoner doom / sludge breaks my initial hesitation of enjoying stoner doom / sludge. There is nothing wrong with the genre rather I find myself interested in other things. Sleep’s The Sciences is making its way on many end of the year lists and for luminaries in the genre, it is to be expected. Bongripper’s 7th record may not change the formula heard in previous albums but I found it much more engaging than other records in the same genre. In either two tracks or split tracks spelling out the fatalistic message, this is a bummer of a record and it tears through the ground.

Tomb Mold – Manor of Infinite Forms: I listened to a lot of death this year and in years past and to see Tomb Mold go from a hip warehouse smelling slime death to something that I would actually say is accessible is something of a miraculous feat. Do not get me wrong, Manor Of Infinite Forms is still filled with riffs, dripping elements, and a decaying sense of life but if one was curious about a death metal album that was listenable but also marching in the forefront of development, this would be a stellar choice.

Panopticon – The Scars of Man on the Once Nameless Wilderness: This is perhaps one of the more black metal records on the list and is not really indicative of black metal in 2018. This is just a really solid and long record. For anyone not familiar with Panoptions other work imagine a person going out to a cabin and settling into the wilderness and making records perhaps influenced by appalachain music. the result is something you were not expecting and wonderful. It is bleak and hoipeful devestating and fufilling.

Satan – Cruel Magic: I think I could talk about Satan until the end of my days as being a strong NWOBHM act during their heydey and then a band which seemed to not notice the 20 year break they took between their second and third record. Creul Magic was their 5th record showing no indication they would be stopping anytime soon.

Hooded Menace – Ossuarium Silhouettes Unhallowed: I already mentioned Tomb Mold being the record to listen to as a start into new death metal. This would the second once you are used to the atmosphere. Take what you just heard and add some slowed riffs and a foreboding sense of dread. Okay, now add some more of that. Hooded Menace is probably a lot cooler than you could ever be so right now is going to be a good time to hang around them and hope they let you hang out at the cemetery with them.

Judicator – The Last Emperor: As much as I champion power me in the current years, I am completely behind the developments as I focused on traditional and heavy for 2018. Judicator has spent 4 records continuing the sound of Blind Guardian, Gamma Ray and other melodic power luminaries and even though they may not be the shining example of newer power metal compared to something else I am not aware of, this was a pleasant record which gleamed like glowing armor.

Yob – Our Raw Heart : Do you remeber what I said about Stoner doom not being one of my favorites. It is still true and even though Yob is listed as stoner doom / sludge, I feel they are some of the ones which have broken apart from the aesthetic chains which seem to pin the genre. From esoteric album covers to even more cryptic melange of styles, this is a band which receives heaps of praise and in the large picture perhaps deserves most if it.

Black Viper – Hellions of Fire: “Influences from Savage Grace, Omen, Agent Steel, Liege Lord, Nasty Savage…” I have talked a lot ab out this band and feel I found them before they appeared on large publications. I could be wrong about this. I probably am. Regardless if you were in the mood for speed and you already have the battlejacket with all of the cool patches, then you are ready to join the cool kids biker club.

Sojouner – The Shadowed Road: This is perhaps one of the few albums I did not write a lot about over the course of the year but is one of the ones which most aligns with the vision of the site. With a combination of epic black metal and the hazy fog of folk melodies, the castle on the front of this is a welcome mat for anyone who finds them selves drawn to the aesthetic.

Solstice – White Horse Hill: I often talk shit about doom metal and for the most part I do not mean traditional doom. there is a reason: there is not a lot being made. while there are a ton of bands making stoner doom, sludge, and to a lesser extent funeral and death / doom, there is a lack of traditional doom. This is the doom which is influenced by the other side of Sabbath and was pioneered by bands like Trouble, Pagan Altar and The Obsessed. There still is the smell of smoke which wafts through these halls but over old stone even older tomes.

Torture Rack – Malefic Humiliation: You see right now I am lapsing into my other list. This is gross. this is disgusting. Hell, the album cover is perhaps one of the more rancid illustrations of the year. This is also filled with tons of riffs so if you have been with me regarding Tomb Mold and Hooded Menace this is a leap up your third recommendation. Suffer forever.

Haunt – Burst into Flame: As yes, Haunt. In a few years, this album maybe just be a flash in the pan which crystallized due to the excitement of old heavy metal. It certainly had all of the selling points to grab people’s attention. This was included on one of the Watchtower selections for the year and by the end of the year it is still spinning at parties.

Summoning – With Doom We Come: I would like to end this with a mention for Summoning. I was watching the developments with Summoning’s newest record via the Dungeon synth scene and its release came around the same time I stopped reviewing dungeon synth. I do not think this is a fantastic record but a recent revisit to the record showed me that it still is enjoyable for anyone looking for that sound which captured their imaginations. It has its production flaws and is perhaps a few steps behind a band that is entering into their third decade of existence but hell, it is still a fun ride.